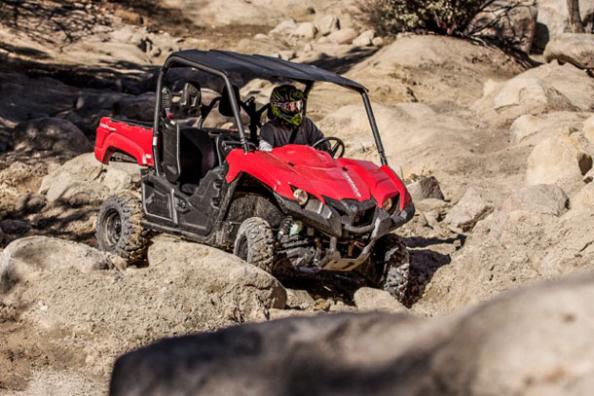 After spending an eventful day trail riding and rock crawling California’s wonderful San Bernardino National Forest in the 2014 Yamaha Viking, there’s no question the new Viking is a significant improvement over the decommissioned Rhino it now replaces. The all-new model is the most powerful, comfortable, and capable SxS Yamaha has ever produced.

The Viking is powered by a redesigned version of Yamaha’s bombproof 686cc single cylinder four-stroke engine. A reworked cam profile and cylinder head make this flavor of Yamaha 700 the most powerful version to date. The Viking has decent power, especially throughout the low and mid RPM range. I found the power to be sufficient during my adventure, but felt the Viking chassis was actually capable of handling more power.

Electronic fuel injection delivers drama-free starts in any weather condition. The EFI nicely compensates for elevation changes to keep the engine running smoothly when oxygen levels drop. I ran the Viking from approximately 5,000 feet up to around 10,000 feet in elevation with excellent results.

However, one negative trait of any large, single cylinder engine is a tendency to vibrate at some point in the RPM range. Vibration occurs because there is no second piston firing in the opposite direction to help offset the inertia of the single piston. The Viking vibrates noticeably at idle but disappears as soon as the RPM exceeds idle speed. This idle vibration doesn’t affect performance, but Viking owners will need to live with this characteristic.

The Ultramatic CVT transmission is a carryover from previous Yamahas, and it’s still one of my favorite transmissions in the SxS industry. The Ultramatic incorporates a centrifugal clutch in addition to the standard twin pulley primary and secondary clutches found in all CVTs. This might seem like minutia to some people but I can assure you it isn’t. The centrifugal clutch makes the Viking a fantastic rock crawler and delivers excellent engine braking characteristics because it keeps constant tension on the belt. The Ultramatic performed flawlessly on the gnarly, rocky sections of the trail I negotiated.

The Viking also features a fully locking front differential, which was the key component to me successfully traversing a gnarly, large uphill rock crawling section out on the trail. Since gaining momentum to make the climb wasn’t possible and the rocks often limited me to one front and one rear wheel on the ground, the locking diff kept my Viking moving forward.

Rolling on four wheel independent suspension with a rear sway bar to curb body roll, the ride is comfortable, if not a tad on the stiff side when unladen. The Viking handled the rough, whooped out, rocky terrain well and I immediately felt the additional front travel compared to the old Rhino. The ride is definitely tailored more for work and responsible trail riding. Base models come without Electronic Power Steering, but I’m a firm believer that EPS is worth the $1,000 premium it fetches. Unlike the EPS offered on Yamaha ATVs, the Viking EPS functions when idling at a stop. This is especially important and noticeable when trying to pick the perfect line through a treacherous rocky climb or descent where one wrong move can end the adventure very, very badly. The increased wheelbase and width give the Viking a planted feel in corners and off-camber situations.

The interior is noticeably larger than the Rhino, with plenty of shoulder room for three stooges. The seating location for the middle passenger is unique: the seat is positioned slightly rearward of the driver and right passenger to helps prevent the middle passenger’s shoulders from rubbing the other occupants. The middle passenger also has foot holds molded into the floor to keep rogue passenger feet from sliding into the driver’s brake and throttle controls. A large grab bar also gives both passengers a secure place to hang onto when the trail gets sketchy.

The Viking has a huge 9.7-gallon fuel tank. The gas gauge barely moved during my 60-mile jaunt in the SoCal — even with the significant elevation change and gnarly terrain. While Viking’s large metal dump bed has a capacity of 600 pounds and a towing capacity of 1,500 pounds, it falls significantly short of some competitors.

Since the introduction of the Yamaha Rhino a decade ago, the SxS/UTV industry has evolved significantly in response to a growing, changing market. While it appeared Yamaha was asleep at the wheel with very little changes to the Rhino, they were actually busy crunching numbers and designing a replacement. The 2014 Viking is comfortable and capable. It has an ultra-reliable power train that should give it years of trouble-free service. Buyers looking for a SxS designed with serious work and play in mind should consider the 2014 Yamaha Viking.

Misses:
– single cylinder vibrates at idle
– ride is a tad on the stiff side
– disengaging the front differential lock requires a complete stop
– towing and bed capacity fall short of competitors