As John Browning's icon turns 100, we pay homage to one of the most successful handguns of all time. 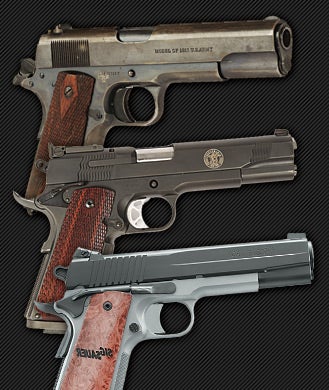 In the early 1900s, the U.S. Military was mulling some changes in its service pistols. The Colt Single Action Army, considered antiquated and slow to reload, had given way to double-action revolvers in .38 Long Colt. That .38 cartridge had proven to be woefully short on stopping power in military actions in Cuba and the Philippines. It was time for something new.

The general consensus was that soldiers needed a pistol in a substantial caliber, and the powers that be decided to go back to some sort of .45. At the same time, worldwide development of the autoloading pistol was in full swing, and it was thought that such a pistol would be easier for troops to operate. Soldiers could also take advantage of the fact that autoloaders generally held more cartridges. A call went out to gun designers, inviting them to submit their autoloading handguns for military tests.

Chief among those responding was John Moses Browning, a Utah inventor of some renown. Browning had invented several of the popular and reliable Winchester lever-action rifles, as well as other firearms. The pistol he submitted was of short-recoil design. It sported a 5-inch barrel and a 7-shot removable magazine, and was chambered for the .45 ACP cartridge. It had an external hammer, a thumb safety and, at the request of the U.S. Military, a grip safety.

Flawless Debut
In the final tests, Browning’s pistol fired 6,000 rounds without a single failure or malfunction. Military legend has it that this was the first time a weapon submitted for military tests functioned flawlessly. Early in 1911, the U.S. Military accepted Browning’s design as its new service pistol. The legend of the 1911 .45 auto was born.

In those days, the Colt Firearms Company had the civilian and military rights to produce the 1911 auto. During both of the world wars, however, the government demand was so great that manufacturing contracts were farmed out to a number of other companies. Outfits like Union Switch & Signal, Remington, Ithaca and Remington-Rand (the typewriter folks) all held contracts to produce the 1911 for military use.

Man-Stopper
In the course of those conflicts and others, U.S. servicemen either cursed or blessed the .45 auto. Some thought it kicked too much. Others said it jammed too often. Some claimed it wasn’t accurate enough. But by and large, most of our soldiers came to appreciate the pistol as one of the finest fighting weapons ever designed. The big .45 was a comforting companion when things got up close and personal, and the cartridge proved to be an adequate man-stopper. It served as the United States service pistol from 1911 to 1985. In fact, many of these guns are still in use by special military units.

Soldiers coming home from the world wars tended to look around for something to do in civilian life, and many of them gravitated to law enforcement. They figured, and rightly so, that the pistol that had served them so well in the battlefield would be up to the task of policing America. Back in those days, most lawmen were expected to provide their own handgun, and many saw the value of carrying the 1911. The .45 auto was so popular in Texas that it became the unofficial sidearm of the Texas Rangers. Such legendary lawmen as Charlie Miller and Capt. M. T. “Lone Wolf” Gonzaullas strapped on the 1911 as regularly as they pinned on their Ranger badges. Across the nation, numerous other lawmen relied on the proven value of the 1911 pistol.

Too Much Gun?
However, by the time I entered law enforcement, in the late 1960s, most departments specified that officers carry a double-action revolver. We could carry just about anything we wanted to as long as it was a Colt or Smith & Wesson revolver chambered in .38 Special. This was generally due to police administrators who did not understand the 1911, or autoloading pistols in general. Essentially, they bought into the old claims that the gun was not accurate and was subject to malfunctions. They also objected to the habit American lawmen had of carrying the weapon cocked and locked. To revolver men, that just didn’t look safe.

Myth Busting
As a young cop, I swallowed all of that hype until the day that a friend of mine, who happened to be a 1911 fan, had heard enough. At his insistence, I borrowed his G.I. 1911, scrounged up several hundred rounds of military ammo, and did my best to make it jam, malfunction or break. The old warhorse didn’t do any of those things, and I was hooked.

I carried a 1911 .45 for almost 30 years as a Texas peace officer and Texas sheriff, first as my off-duty pistol and later as my primary sidearm. It is still the pistol that I carry the most in civilian life. When properly cared for, the 1911 is as reliable as anything that man has ever invented. Out of the box, most of today’s 1911s will group hits at 2-3 inches at 25 yards, which is plenty adequate for personal defense. In addition, it is one of the thinnest big-bore handguns, which makes it easy to carry concealed. In my case, I found that the 1911 .45 auto was the most powerful handgun that I could handle quickly and accurately. And, trust me, the .45 ACP cartridge, especially with today’s hollowpoint ammo, is a substantial fight-stopper.

From Browning to Cooper
If John Browning is the father of the 1911, then Col. Jeff Cooper should be known as its greatest proponent. A Marine, Col. Cooper developed a handgun training system that has come to be called “The Modern Technique of the Pistol.” An essential factor in this new technique is the 1911 .45 auto. Espousing all of the values of the 1911 that I have already listed, Cooper went on to teach handgunners how to fight effectively with the big auto. His Gunsite Academy, founded in 1976, is still in operation and continues to be dedicated to the good colonel’s valuable techniques.

The Legend Evolves
Looking at today’s vast assortment of 1911 pistols, you might never guess that the gun once suffered from skimpy sights and a so-so trigger. One of the things that Col. Cooper, and others, began to preach was that the fighting auto needed high-visibility sights and a smooth, clean-breaking trigger. Obviously, the gun companies have paid heed.

Today, the 1911 pistol is manufactured by so many companies that I’ve lost count. Remington has just introduced a 1911, and another major firearms manufacturer will do so this year. Originally chambered for .45 ACP, the guns are now available in 9mm, .40 S&W, .38 Super, .357 Sig, 10mm and a number of other cartridges. And after all these years, the 1911 is still the darling of savvy servicemen, lawmen and legally armed citizens.

That popularity is not due to nostalgia. The simple fact is that the 1911 proved itself to be a reliable fighting pistol on the battlefield and in the smoke of little fights long before you and I were born. John Browning’s 1911 pistol is an American Classic.