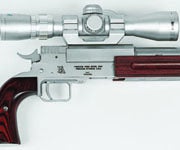 Rounded guns are supposed to be round, and boxy guns are supposed to be boxy–that’s why a 1911 looks one way and the Colt Single Action Army another. Mixing the two just isn’t natural. It’d be like dogs sleeping with cats. Or hipsters dating rednecks. But then, some odd couplings work out just fine. Think chocolate and peanut butter.

In fairness, though, the silhouette of the Freedom Arms Model 2008 does take some getting used to. The combination of the angular, flat-bottomed forend and the graceful curve of the grip has overloaded the mental circuitry of more than one shooter out there in Internet-land, resulting in sputtering eruptions of invective, general confusion and, in extreme cases, red-eyed rage.

A deep breath is in order. I think it is fair to say that most of these critics would come around if they had an opportunity to spend time pulling the trigger on this interesting new pistol.

Stock Ergonomics
There’s a very good reason for the shapes of both parts of the stock, for starters. The flat on the forend gives the pistol stability while nestled in the shooter’s off-hand or when he is shooting off bags. The rounded grip makes for comfortable shooting because of the way it lets the pistol roll in the hand during recoil, which over a long shooting session will result in more accurate shot placement.

Removing the two screws in the forend, which seat against solid metal inserts in the wood, and tapping out the pin joining the frame and barrel is all that’s needed to swap barrels. The M2008 is currently offered in 10 cartridges, from the .223 to the .375 Winchester.

Break-Action Fix
Break-action guns of this type are often at a disadvantage when it comes to clustering bullets into tiny groups. This is because the central pivot point, where the barrel joins the frame, is prone to flexing when any pressure is applied to the firearm, especially with designs where the forend connects directly to the barrel.

The M2008 works around this by attaching the forend to a hanger that extends out from the pivot point. This free-floats the barrel and puts pressure or flex from the forend where the action can resist most effectively. Think about the extra effort required to break a stick with your hands touching each other–that spot is like our pivot point–and you get the idea.

Minimal Slop
The tolerances in the machining of the pistol also eliminate accuracy-diminishing slop. Everything on the M2008 is tight where it needs to be, yet the pistol operates–opens, closes, comes apart–smoothly and without any fuss. The low profile of the hammer allows for easy access for your cocking thumb with a scope mounted, and the broad, gently curving surface on the face of the trigger–which on our sample broke without any creep at 2 pounds 12 ounces–makes it easy to find a sweet spot for your trigger finger.

Sub-MOA
My M2008 was chambered in .223 Rem., and I tested it with bullets ranging in weight from 35 to 77 grains. The barrel’s 9-inch twist provided plenty of stability to the heavier projectiles, and it shot everything from 50 grains on up very well.

The best group of the evaluation came from Black Hill’s 52-grain match hollowpoint load, which printed a .734-inch 5-shot group at 100 yards. But right on the heels of this was a .762-inch group using Winchester 55-grain BST bullets and a .770-inch group from Remington’s 62-grain match load.

The pistol’s consistent sub-MOA performance spells trouble for any varmints within 300 yards–though the limit of the M2008’s range is dictated more by the ability of the shooter than by the construction of the gun. It’s safe to say that you will run out of skill before the M2008 runs out of accuracy.

But what about the pistol’s lines? I’ve grown very fond of the design, which has a sculpted, modern look with shades of the classic Colt Walker in its profile. But should the contrast between the forend and the grip still be too jarring for your sensibilities, fear not. Freedom Arms will sell you a forend blank for 60 bucks that you can file and sand into any shape you like.