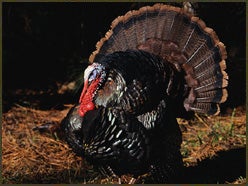 Sometimes, conventional turkey-hunting tactics simply don’t produce. When that happens, hunters can either remind themselves that the only predictable thing about turkey hunting is unpredictability, or they can prove just who has the bigger brain. When all else fails, here are seven examples of creative problem solving that just might merit a try when normal hunting strategies aren’t getting the job done.

1. Scare them silly
Those fortunate enough to live in states that have fall turkey seasons are familiar with the scatter-the-flock-and-call-them-back technique. If you’ve never had the opportunity to do this, don’t worry, the tactic is simple. Get as close as you can, unload your gun and charge. Your goal is to make the turkeys fly in as many directions as possible.

After the flock is split, set up and call the lonely birds back in. In the right circumstances this tactic is a good way to get a gobbler away from his harem. When a tom has plenty of female company, enticing him to come to a call is an iffy proposition. A longbeard might gobble vociferously, but his message is essentially: “The party’s over here, come and join us.” If you send his harem flying to every point of the compass, however, you greatly increase your odds of calling him in. Once the gobbler recovers from his initial fright, he soon discovers that solitude is anything but splendid.

2. Pick a fight with a hen
While getting a gobbler to leave the gals takes some doing, under certain circumstances you can get the hens to come your way. The idea is to make a dominant hen angry. If a hen answers your yelping, imitate her yelp for yelp or cutt for cutt while doing your level best to mimic her cadence and sound. Sometimes this will make a dominant hen so mad she’ll come looking for the loudmouthed intruder. When that happens, everyone else tags along, eager to see the fight and curious to discover the nature of the newcomer with the nerve to challenge the leading lady. There is little doubt that when this happens, Lord Longbeard will come strutting along, bringing up the rear but nonetheless keeping his girlfriends in sight.

3. Double-team a tom
Double-teaming often involves the “walk away” hen tactic, where one hunter leaves a hung-up gobbler while the second one stays put. Sometimes a variation of this theme works well. In places where the vegetation or terrain offers cover, both hunters can go on the move to fool a hard-to-call tom. As the caller eases away to make it seem like the amorous hen has changed her mind, the second hunter creeps closer to the gobbler and sets up again. This can be particularly effective for birds that are 100 or 200 yards away or those that strut back and forth as they gobble.

4. Get in close
Many experienced hunters make a point of moving closer when they hear a tom gobble. These hunters like to get within 150 yards of the gobbler before setting up and calling. However, in areas where hens are actively breeding, that may not be enough. For example, several years ago, while hunting on a farm in northeastern Missouri owned by Tony Knight of Knight Rifles, every time a gobbler responded to my calls hens got in the way.

Finally, I vowed to get in the game, even if it meant spooking the next turkey that gobbled. So when a tom responded to my crow call, I quietly headed right for him. Gobblers often have a comfort zone. Once you cross its imaginary border, calling them in is easy. But if you stay just outside that line, a gobbler will often try to get the hen he thinks you are to come his way.

Using a crow call as I crawled, I got this vocal gobbler to give away his position as I snuck to within 80 yards of him. Then I set up, caught my breath and made a few yelps. The bird responded immediately, and 30 seconds later he came into range. No hen had a chance to interrupt thproceedings.

5. Find a bottleneck
Savvy turkey hunters know to use the lay of the land to their advantage. This might mean creeping along in a creek to find a receptive bird, using a ridgeline to mask movement or taking advantage of exceptionally thick cover to close ground on a gobbler. Similarly, toms have preferred travel corridors, with old logging roads, crests of ridges, open fields and creek banks among their favorites. Knowing the whereabouts of such regularly used trails can put you in an ideal position to cut a gobbler off at the pass, particularly if you have also identified his preferred roost sites.

Some hunters say anything hinting of an ambush is unethical, but many of these same hunters will take up semi-permanent residence adjacent to food plots when hunting deer. Using the landscape to good advantage involves sound woodsmanship skills-anyone can call in an uneducated or lonely tom, but it takes skill to successfully stand-hunt turkeys. Watch to see where birds enter fields, look for their tracks in the mud at creek crossings and basically scout for them as you would for deer.

6. Sneak and peek
To me, one of the hallmarks of a true hunter is worn-out knees in his camo pants. For a variety of reasons some birds simply won’t come to you. This is where quick-witted turkey hunters distinguish themselves. If this involves sneaking and easing your head up for an occasional peek, or crawling on your belly with periodic use of a locator call, so be it. Sometimes it is necessary to stoop to conquer.

Late in the morning when gobblers are out strutting in fields, clear-cuts and other openings, look for a route that will get you within shotgun range. Then begin your stalk or crawl. If you manage to avoid the tom’s (and any hens’) keen vision to get close enough for a shot, you’ll have earned every feather of that bird.

7. Just charge
When the last day of the season or the final few hours of a road trip find you with a tag still in your billfold, it might be time to try something rash. For example, when a turkey stays out in the open, visible but absolutely unwilling to move your way, you might want to consider a one-man version of a cavalry charge.

Empty your gun’s chamber, take off your turkey vest, crawl as close as you can possibly get and spring from the cover, running straight toward the strutting gobbler. Usually, the bird suddenly remembers urgent business in the next county and takes wing. Occasionally though, a gobbler will be so shocked he’ll stop and freeze in place. Should that happen, just be sure not to stop running until you are within range. When you are, be ready to ram a round into the chamber and shoot immediately.

Not so fleet of foot? Here’s another tactic: Noted call-maker and videographer Mark Drury once spent hours building a combination brush pile/blind in a field where turkeys had repeatedly flaunted their presence out of shotgun range. The blind stuck out like a sore thumb and was very uncomfortable, but it did a fine job of hiding hunters and apparently didn’t bother the turkeys one bit. Drury filmed more than one kill from the hideaway that spring.

Preston Pittman, a long-established contest caller, went a step further. Working under the cover of darkness, he dug a pit in the middle of a field that was deep enough to hide in. He crept into the pit blind well before dawn so the tom wouldn’t see him cross the open field. His hours of digging and a wake-up time that was early even for turkey hunters paid dividends in the form of a fine gobbler.