Are Two Heads Better Than One?

Do you Strut Zoners use turkey decoys? Do you carry just a hen? How about a hen and jake combination... 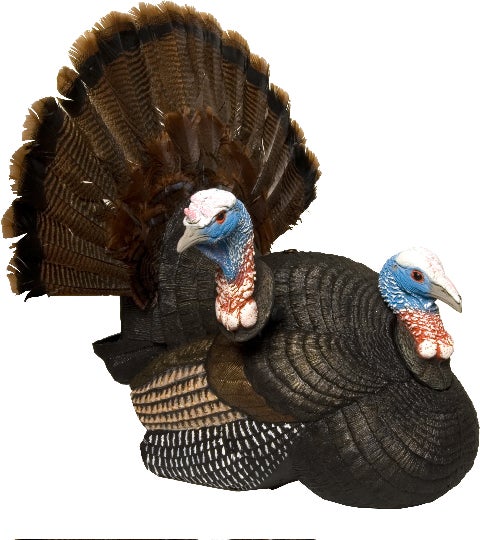 Do you Strut Zoners use turkey decoys? Do you carry just a hen? How about a hen and jake combination for your setup? Well if you like the strategy of fooling spring gobblers with fakes, listen up.

One of the pleasures of hanging out at the SHOT Show every year is conversing with some of the best turkey hunters in the business. I caught up with Harold Knight and David Hale of Knight & Hale Game Calls fame, and here’s what they had to say about the new Carry-Lite Peep’n Tom & Pretty Penny Combo Pack:

“We were pleasantly surprised to see on hunts last year what putting two heads on a gobbler decoy could do,” Knight said, discussing Peep’n Tom prototype field testing to get it ready for release this year. The new scaled-down version (10% smaller than the Pretty Boy) includes two interchangeable gobbler heads. One can be staked through the body of the decoy (“the looker” as Knight says), while the other goes in the usual place.

“That’s where the name ‘Peep’n Tom’ comes from,” Hale added. “It’s made to look like there are two gobblers there — one looking over the other one.” One redder head, the so-called looker, is alert, maybe ready to fight, while the other whiter one appears ready to breed.

A photo reproduction fantail is provided in the package, though a lot of turkey hunters will want to put a real fan in the slot. The synthetic beard is adjustable if you want to shorten it up and slide a jake fan in the back. You can keep the beard long or short.

And then there’s Pretty Penny. She’s also got two heads (to be used separately), one for if you want to put her in the breeding position on the ground, and one if you want to stake her in standing form.

Bodies for both are made from soft rubberized collapsible material for easy transport. An instructional DVD (two great hunts involving the new decoys where longbeards attack the fakes), and even a carry bag round out the deal.

When would I use these dekes? On field hunts where I’ve roosted turkeys nearby, and in earshot of my calling. On bow hunts when I want to keep a strutter in place long enough to draw effectively.