The Fever (An Incomplete Memoir) 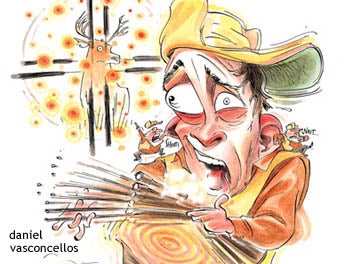 My old man suffers the fever bad. He gets a variety as intense and recurrent as malaria: the shakes, the sweats, the flushing, the gape of confusion wrapped in tension that tautens to unbridled anxiety and a severing of control that triggers panic, explodes in failure and lingers as shivers of disbelief and looping memory.

The illness grips him most often in November, usually on opening morning of Vermont’s whitetail season. I’ve borne witness to several of his bouts with the malady and heard enough breathless accounts of the others to reduce all tales about his virulent buck fever to one.

It’s opening morning. The second Saturday of the month has dawned bright, cold and snow-clad. The old man is sitting in his fixed wooden deer stand overlooking a hardwood flat. Suddenly, as if in answer to a prayer, he notices a flicker of movement, then spots a doe being chased by a nice buck.

No matter how hard he tries to prevent it, the fever ignites in his gut and quickly flames through his chest and up into his forehead. The ague grows more severe as the deer approach him and he knows he has to shoot. By the time he flips off the safety, he is gasping, more often than not on his scope.

“The scope was fogged!” he’ll say later. Then he’ll recount how he had to dig a handkerchief from his pocket as he watched the buck close to within 60 yards.

By now his heart’s racing and there’s the metallic taste of alarm on his tongue. He feels the situation slipping away. He gets the gun to his shoulder, clutching it like a teenage boy with his first slow-dance partner.

Dad slams his left eye shut. The crosshairs rumba as he tries to settle on the buck trotting through the trees. His entire body tenses. His finger trembles toward the trigger. He flinches and boom! his .30/06 goes off.

The scope smacks him in the eyebrow. The bullet flies high. It whacks a shagbark hickory tree.

The buck, meanwhile, scrambles up the bank after his doe. The old man flings lead as the deer bounds away. Boom! Boom! And maybe another boom!

When it’s over, he’s gasping, complaining about what he calls the “Billy Brackos”—a severe gastric condition that often results in his lurching from his tree stand and staggering uphill before offering his breakfast to the woods.

Mind you, my dad’s a formidable intellect. Profoundly hard of hearing since childhood, he has nevertheless earned three degrees: two in electrical engineering and a master’s in business from Harvard. He helped build and run several high-tech corporations. He was known as a brilliant negotiator and an innovative leader. But put a buck in front of him and, like so many of us at one time or another, he falls apart.

Indeed, the beautiful and insidious truth about the disease is that no one is immune. Buck fever can hit anyone at any time, no matter how smart, experienced or tough.

Consider Hogan. Now there was a hunter, my friends: a tall, handsome, strapping man who spent his young adulthood carrying out clandestine operations for the CIA. A man who then went on to dedicate much of the last 30-odd years of his life to laughter, fishing and hunting.

Hogan used to hang around my dad’s deer camp in the mid-’80s when there was a huge 11-point buck ghosting about our property. As he later told the story, the second morning of the 1986 season found him hiding in the crown of a blowdown maple, looking down on two intersecting game trails. His back was to a steep, tangled slope.

Around 9:15 Hogan heard a branch snap behind him. He eased around and saw six does and the monster coming right at him. The buck had his nose stuck against the tail of one of his lady friends. He was grunting, oblivious to danger.

Now keep in mind that this was a man who used to make a living sneaking around North Korea and Red China without getting caught. But as the herd moved downhill toward him, he was as excited and unnerved as he’d ever been in his life.

The 11-pointer and his harem passed Hogan’s makeshift blind at 15 yards.

It wasn’t until the herd ambled out to 65 yards that Hogan recognized the symptoms of the fever and fell to pieces. He threw up his .30-40 Krag and sent a barrage of Hail Mary shots that missed the buck by a country mile.

Back at camp that night, Hogan sat in a chair, nursing a bottle of wine and moaning, “I had him. Swear to God, I had him. But it was like I went to another world.”

Now before you go thinking that as an experienced outdoor writer I’m above it all and have never been stricken, I admit I had a minor bout with the fever shooting my first whitetail at age 15. But the true virus did not lay me low until I was in my mid-30s.

Then it struck twice…in less than a week.

The first traumatic experience unfolded in a northwestern Montana river bottom on the last afternoon of a 10-day trip. The weather had been lousy for deer hunting: warm and windy with a full moon.

My friend Dave and I looked at a map, and he, being a triathlete, and I, being a chucklehead of some note, decided to climb 2,000 vertical feet down the backside of the mountain we’d been hunting to investigate an otherwise inaccessible, crescent-shaped flat beside a river that shall remain nameless.

When we at last reached the bottom, the wind was in our faces and the river roar drowned out our footsteps. We split up. Dave worked the bank while I still-hunted the seam where the mountainside met the flat. I hadn’t walked 50 yards when I picked up a five-point shed antler. I hadn’t walked another 50 yards when I spotted a doe moving ahead of me in the thick cover. I stopped, looked to her left and was hit with an ICU case of the fever. There, at 80 yards, was one of the biggest bucks I’d ever seen: wide, tall, heavy-antlered, with bladed tines going every which way.

Voices began chattering in my head. I can’t remember what they all said, but I distinctly remember hearing echoes of my father: My scope’s fogged! And another more like my own that screamed, Shoot, you fool! Shoot!

Not a chance for this fool. When the doe stepped into an opening at 70 yards, I started trembling like I had hypothermia. My joints turned arthritic. I saw spots and thought I might pass out.

In hindsight I should have waited. Eventually the buck probably would have entered the same shooting lane the doe had. But the night before around the dinner table we’d discussed the merits of taking the first good shot you have on a big buck because you might not get another. In the grip of the fever, that idea turned loony.

I got up the gun somehow and tried to aim at him through a maze of branches. Boom! The deer sat back on his haunches like he was hit. My spirits soared. Then he got up and started hauling buttocks out of there.

“Buck. Huge” was all I could manage when Dave found me wandering in circles. Then my verbal skills collapsed into total gibberish.

Dave, a former U.S. Army burn surgeon who is not easily shaken, looked at me in disgust. He figured the buck might try to circle us and ordered me forward across the flat as he dry-tracked the buck uphill.

We hadn’t split up a hundred yards when Mr. Cool Burn Surgeon jumped him and got the fever himself. He managed only a fleeting shot as the buck took off downhill.

Hearing the report, I started running back the way I’d come. I don’t know who was more surprised, me or the buck, when we almost collided. Seeing him skidding at five yards threw me back into babbling idiotdom. Having no such issues, the buck took off in 20-foot bounds, showing me a profile of his incredible rack. I responded by heart-shooting a spruce branch. We’d never scratched him.

During our entire climb out of “the buck pit,” as we’d taken to calling it, we relived the nuanced horrors of the fever. Every nanosecond of the incident kept playing in my head in this crazy closed loop. It kept playing well into the next week as I sat in a box blind in central Saskatchewan.

I was sharing a guide with a guy from Alabama whom I’ll call Harry, as savvy a hunter as I’ve encountered over the years. Every morning, we’d be dropped off at our blinds. Every evening, we’d tell each other what we’d seen on the ride back to camp.

Midweek in the pre-dawn darkness, I was convinced that I’d screwed up so badly in Montana that I’d angered the deer gods, and that there was no way I was going to see one of the giant whitetail bucks the area was known for. Wrong, fool.

Shortly after first light a doe danced across the slough bottom I was watching. Another doe followed and then a seven-pointer that chased her around. Suddenly from stage right, an absolute bruiser buck stepped from the willows.

He was a massive-bodied 10-pointer with blood trickling from fighting wounds, high tines and beams that curved forward of his nose.

Not recognizing the origin and dark portent of the Hoganesque phrases bubbling from my subconscious, I somehow got my rifle barrel out of the shooting slot without banging it against the plywood. The buck, meanwhile, bristled his hair, laid back his ears, lowered his head and charged, ramming his rack into the smaller buck’s rump.

That’s when I completely lost it.

My heart beat like a bongo. I began panting and drooling like my chocolate Lab. I felt sure I was going to throw up. Then the schizophrenic voices started.

Shoot him, bone-brain! I heard. Don’t shoot, you ignoramus! another cried. He’s big! He isn’t. His body’s big—his rack’s small!

In retrospect, the deer was easily in the 160-class, perhaps better. But the fever had me so strung out it sounded like a flock of crazed mynah birds squawking in my skull.

Smart move. Don’t shoot! You’re a moron. Take him! And so forth.

The monster chased the doe around in front of me for nearly 20 minutes. I had the safety off twice. But in the end the voices paralyzed me. I never pulled the trigger, and he disappeared back into the willows.

All day long, I sat in the box, near catatonic, praying with revivalist fervor for one more look at that buck. “I promise I’ll shoot,” I kept telling the chickadees that flitted about the blind. “I promise.”