Hunting Antelope On Their Turf

"The only way to hunt antelope is from a pickup truck," the man said, banging his glass down on the bar. 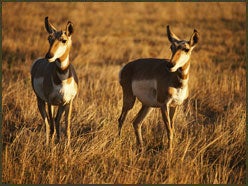 And with that he strode out. We had been debating the ethics of hunting antelope, and his philosophies were, well, different than mine. His final statement summed up both his position and our differences.

Antelope are probably more disrespected than any other big-game animal in North America. The nature of their lifestyle and the terrain they live in make them relatively easy targets. But increasingly, hunters are challenging pronghorns on the animals’ terms, which, in the low-shrub, grassy prairies, can make for an exciting and challenging hunt.

The pronghorn antelope relies on speed as its major defensive tactic, and its superb eyesight allows it to spot danger a long way off. That genetic combination of speed and sight means that the antelope prefers the most open spaces available. And when alarmed, it finds security in those same wide-open areas rather than heading for protective cover, as most big-game animals will do.

Because they live in high-visibility conditions, antelope are easy to spot. In prime locations, I’ve seen upwards of 500 animals during a morning of hunting. And unlike other western big-game species, antelope inhabit a fairly level landscape, much of it traversed by roads. All of which contributes to the prevalent method of hunting pronghorns–using a vehicle.

There is nothing ethically wrong with seeking pronghorns from a rig, provided the animals aren’t chased by occupants of a vehicle. I suspect that 95 percent of all antelope hunters use a vehicle to locate animals. Once an antelope is spotted, a stalk is then planned to sneak into shooting range.

To a lot of hunters, especially locals who know where to go for a quick hunt, pronghorns are game of opportunity, hunted with little or no planning. Plenty of antelope are taken during lunch breaks or on Sunday mornings before kickoff. There’s nothing wrong with a fast hunt. Given our hectic lifestyles, some folks have precious little time to enjoy the outdoors and the challenge of the hunt. I’ll not begrudge them that.

But consider the other option–of overnighting in the desert where antelope live and sharing the joys of the western landscape.

A few years ago, I camped out with a group of six other hunters on a Wyoming antelope hunt. We pitched our tents in a cozy draw and sat around a campfire after dinner, enjoying good conversation interrupted by the shrill yaps of nearby coyotes. Before sunrise we washed a generous breakfast down with hot coffee and planned our hunt. Because we’d scouted the area, we knew where several fine bucks lived and figured ways to get at them. Some of the bucks inhabited private land, and we’d already obtained permission from landowners to hunt on their property.

By noon the next day, three of us had filled our tags. We erected a tripod out of sturdy poles and skinned our antelope in camp. I cut an entire animal into roasts and steaks; he’d feed us for the next few days as we hunted for sage grouse and fished for rainbows and walleyes in nearby lakes.

That’s the way antelope hunting can be–enjoying the animal and its environment to their full potential.

If you really want to challenge an antelope with all your skills, try the animal with a bow or muzzleloader. You’ll know you’ve been on a hunt once you do. The need to get very close to this ultra-alert speedster will test all your abilities as a hunter.

Even if you’re a rifle hunter, there are ways to truly test your skills. I recall a unique hunt several years ago with Chuck Buck, president of Buck Knives, and outdoor writers Jim Woods and Ron Thomas. Several herds were bedded on a sagebrush plain, bordered to the south by a thick stand of quaking aspen. To get within shooting range, we used the aspens as screening cover.

We split up in the trees; Jim headed for a herd on thlow end of the slope while I headed for the upper herds. As I slipped along in the lush understory, I saw elk tracks in the soft earth. I had to keep reminding myself that I was putting a sneak on a buck antelope rather than a bull elk.

Finally I eased toward an opening and saw antelope bedded within 10 yards of the timber’s edge, obviously secure in their positions. Through binoculars I saw no good bucks, but I spotted a fine antelope farther out in the opening.

A doe lay next to him, blocking my shot, and I played a waiting game. The distance was about 225 yards.

Several minutes later, Jim shot at a buck he’d been stalking, putting the rest of the antelope to their feet. The buck I’d been watching got up running, and I followed him as he was swallowed up into the fleeing herd. I held my shot for fear of hitting another animal unintentionally and never got another opportunity, because trees obscured my vision as the antelope ran off.

Though I wasn’t successful, the stalk was satisfying. I like the aspect of stalking close, no matter what I hunt. To many hunters, pronghorn hunting means long-range shooting, which in itself is fair and rewarding to those who elect to shoot 300 yards and better. To me, however, I’d just as soon stalk a lesser animal and score, as shoot a bigger buck at 400 yards while taking a rest from a fence post.

In defense of long-range hunters, I must say that I believe the antelope is the most carefully and critically evaluated big-game animal in North America.

Deer or elk are evaluated based on number of points, width of the rack and mass and length of the tines, but the animals seldom give you time to look them over carefully. Using a spotting scope, the antelope hunter seeks to determine the length of the horns and prongs and general mass of the horns, and is evaluating in fractions of inches.

As antelope trophies go, a 16-inch buck is a giant. Many areas will never produce 16-inch bucks because of available nutrition and genetic makeup of the local herd. A 15-inch buck is a trophy practically everywhere. In most antelope states, the 14-inch buck is highly respected, with 12- and 13-inchers making up a big part of the total buck harvest.

While I’m not a great fan of long shots for antelope, I can get downright surly when hunters shoot at running animals. Sometimes you will see formulas that are supposed to ensure a good hit at a running antelope. That’s nonsense, because too many variables are involved–distance, speed and angle of travel must be figured precisely to even consider a shot. At top speed, an antelope is ripping along at nearly 60 miles per hour. But it’s impossible to calculate whether the animal is indeed traveling that fast. Add to that the fact that the wind is almost always blowing where antelope live, and wind drift becomes a further complication.

A long shot at a running animal almost always means a miss, or a wounded animal. But since antelope make their getaways in open spaces and can be seen fleeing for a long time, some hunters think that eventually one of their bullets will score. If the first shot misses, maybe one of the others in the magazine will work. I’ve heard horror stories where a hunter has gone through a box of 20 cartridges while trying to anchor a running animal. Recently, a Wyoming game warden told me, “Antelope do things to people. They bring out the worst in some hunters.”