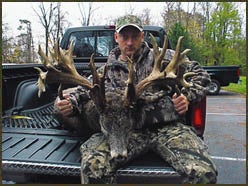 In 1988, the Pope and Young Club (P&Y;) decreed that any animal killed with a bow with a let-off greater than 65 percent would not be listed in its record books. Intending to preserve the primitive nature of bowhunting, the organization set a limit on the percentage of a compound bow’s weight at full draw in an attempt to halt technological advances in hunting-archery equipment.

The rule didn’t stop a thing. Manufacturers kept inventing higher let-off bows, and consumers drove the market toward them. In fact, Mike Ziebell, marketing director for Mathews, says, “Today more than eighty percent of the bows we sell are high-let-off models.”

Because of this modern preference for high-let-off bows, the number of bowhunters who felt alienated by Pope and Young was surging. To bridge this growing divide, late last year P&Y;’s voting members voted 294 to 148 to rescind the let-off rule. Now any animal legally killed with a bow can be listed in P&Y;’s records. There was a compromise, however: Animals killed with compound bows that have let-offs greater than the 65 percent benchmark will have an asterisk placed next to their scores in the P&Y; record book.

A New World Record?
The elimination of the let-off rule is retroactive; as a result of this decision, Kevin Hisey, executive secretary of P&Y;, says he expects a flood of new entries from bowhunters to come in.

The formerly ineligible whitetail that is receiving the most attention is a 39-point buck bagged by Mike Beatty of Xenia, Ohio, in November 2000. The “Beatty Buck” has been scored at an incredible 3047/8 non-typical inches, which would top Del Austin’s 2797/8-inch non-typical P&Y; record (shot in Nebraska in 1962).

Beatty’s take: “I was thrilled when I heard that my buck is now eligible. But even if I could, I wouldn’t change a thing about the way I harvested my buck.”

Currently the Pope and Young Club publishes a single volume categorizing all of its whitetail records. Hisey says that may change in 2005, when the club is scheduled to meet to validate and add new records. They might decide to split the massive book into several volumes, Hisey says. One book might even list only big-game trophies that were killed with traditional archery equipment.