The stories behind the most controversial fish and game record-book entries in history. 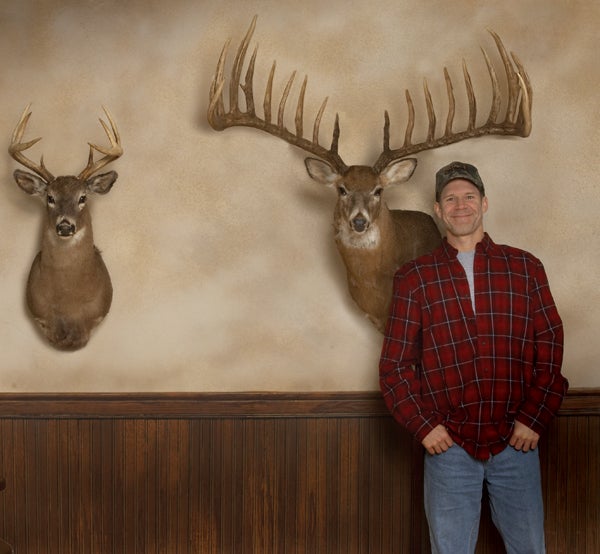 To many of the hunters at the Vermont deer registration station, something was amiss. Yes, the deer about to be checked in last November carried a nice 10-point rack. But when you grabbed the antlers, they shifted mysteriously in your hands. So the hunters alerted authorities.

Turns out the 19-year-old amateur taxidermist registering the deer had jacklighted a doe. Then, using epoxy and lag bolts, a drill and a 10-point rack, the kid “built” himself a buck. He fessed up, paid a fine and spent 10 days in jail–not for his antler wizardry, but for illegally taking the doe.

With hoaxers like this, it’s no wonder that both hunting and fishing trophies come under intense scrutiny just as soon as word gets out about a huge buck, bull or fish. Are those antlers real? Did that fish truly weigh that much? The photo shows a monster, but maybe it’s high-tech trickery, a PhotoShop version of epoxy and lag bolts meant to build a tall tale.

A Buck for the Ages?

When Mitch Rompola announced that he’d arrowed the new world-record whitetail deer, killing it on November 13, 1998, near Traverse City, Michigan, the skepticism was immediate–and it hasn’t stopped since.

Soon three scorers would measure out the rack at an astounding 216 5⁄8 inches net, 3 points more than what was and remains the world record, a whitetail taken by Milo Hanson of Saskatchewan. Hanson’s giant scored 213 5⁄8, the Boone and Crockett Club’s typical record. But some surmised there was something not quite right about the Rompola buck. To those who saw the photo, its rack seemed far too symmetrical, one side nearly a mirror image of the other. The coloring of the rack looked off, too, and in photos, the buck’s ears drooped. Some suggested that the skin over the skull was slit open and fabricated antlers were slid in–which would explain the ear droop, the symmetry and the coloring.

If the buck was real, Rompola did himself few favors. At first, he supplied photos and interviews. But he soon clammed up, got an unlisted phone number and essentially disappeared. The controversy raged, however, much of it on the Internet. In one month, the Detroit Free Press‘s website got more than 200,000 hits on its Rompola story–the paper’s top Web story of 1998.

“All Mitch had to do was sign the scorers’ sheet,” says freelance writer Richard P. Smith, and the buck would have been entered into the Commemorative Bucks of Michigan–in the top spot, in fact. But he didn’t.

Smith, who chronicled the Rompola saga in Great Michigan Deer Tales, Books 3 and 4, believes the buck was completely legitimate. He has talked with the three scorers, as well as the warden who inspected the buck soon after it was killed. All of them, says Smith, tell him the deer was the real deal.

Yet media reports note that Rompola signed an agreement with Milo Hanson’s business associate, whereby Rompola agrees not to refer to his deer as the “World Record.” Rompola also will not enter his deer with Boone and Crockett as long as Hanson’s buck holds the top spot. He signed off on that–for no money–yet passed on the $20,000 two Michigan men put up if Rompola would have the rack X-rayed and entered with Boone and Crockett.

All of which makes sense to Smith. “Mitch was so badly hurt by it all, he doesn’t want to deal with anyone on that deer,” Smith says.

For a couple of years before 1998, Rompola told many people, including Smith, that he was on the track of a really huge deer, generating interest among outdoor writers and hunting industry sales representatives. And when all his hard work paid off and he killed the buck of his dreams, Rompola suddenly did not want the recognition or the money that would have gone along with the record. Was he scared off by controversy, even though he could have quelled all speculation and rumor by making the deer public?

Possibly. But it does give one pause.

In October 2005, a group of anglers calling itself the World Record Muskie Alliance (WRMA) presented a 93-page report to the National Fresh Water Fishing Hall of Fame. That report challenged the hall’s all-tackle record muskellunge, a 69-pound 11-ounce behemoth caught by Louis Spray on October 24, 1949, on the Chippewa Flowage, near Hayward, Wisconsin. Using photographic evidence and analysis, the WRMA concluded that the Spray muskie’s stated length of 63.5 inches was inaccurate, that the fish was actually much closer to 53 inches, and that it therefore couldn’t weigh anything close to 69 pounds. Hall officials disagreed.

“At the very outset, it was a ‘maybe,’ what they came up with,” says Emmett Brown, executive director of the hall. “And you can’t overturn a record on a maybe. And the maybe, I might add, was only if everything they presented was true and accurate and right on.”

It was the WRMA’s photo experts versus college professors who looked over the photos for the hall. The core issue, Brown says, was whether old photos of Spray holding the muskie had enough points of perspective for an accurate estimation of the fish’s length. There was only one strong point of perspective, Brown contends, and not the two or three he believes the photo analysis software required. “So we felt that photo analysis was inconclusive at best.”

Evidence in favor of Spray? A number of sworn affidavits, including one from a local postmaster who weighed the fish, another from the taxidermist who mounted it. No one, as far as fishing hall of fame officials could determine, ever raised a question about the true length of the Louis Spray record muskie.

None of which sits well with the WRMA. In its 49-page rebuttal to the decision, the WRMA says the hall “relied heavily upon crucial misrepresentations of basic data” to preserve Spray’s record. The WRMA challenges the integrity of one of Spray’s key witnesses and argues that only one “disinterested” party provided an affidavit. It also accuses Spray of falsifying other fishing records, for fame and monetary gain. WRMA founder and trustee Jerry Newman refers to the Spray fish as a “hoax,” and argues that the hall, located as it is in Hayward, is simply trying to keep the world muskie record local.

The muskie in question? A mount of it hung in Louis Spray’s Hayward tavern for years, until the bar burned down in 1954.

In December 2005, the International Game Fish Association (IGFA) announced that David L. Hayes, of Leitchfield, Kentucky, had caught the world-record smallmouth bass. It was the second time IGFA had afforded Hayes that honor–for the same fish!

Hayes caught the fish on July 9, 1955, an 11-pound 15-ounce smallie hooked at Dale Hollow Lake, which straddles the Kentucky-Tennessee border. He had the fish weighed, twice–the
second time on certified scales. Soon afterward, he was granted the smallmouth bass record.

Fast-forward to the mid-1990s. Hayes’ mounted fish was displayed at a Tennessee outdoor show. One onlooker felt the fish was too small for its cited weight; later, digging into the fish’s history, he discovered an affidavit submitted to the Army Corps of Engineers office at Dale Hollow Lake, in August 1955. The affidavit claimed that, at the second weigh-in, a dockhand had crammed 3 pounds of sinkers and outboard engine parts down the fish’s gullet and closed the throat with a treble hook.

The man who submitted the affidavit was found and given a lie detector test by a private polygrapher. He passed that test.

In 1996, the IGFA voided the Hayes record. Kentucky also bounced Hayes’ fish from state record books. However, an employee with the Tennessee Wildlife Resources Agency conducted an investigation and concluded that the statement in the affidavit was untrue. Eventually, some of those involved recanted statements, including one who confessed on his deathbed in 1998.

“It was a very convoluted process,” says Jason Schratweiser, IGFA’s conservation director. “People went back and said, ‘This wasn’t true–we gave the wrong information.’ It was just kind of a mess.”

As to why people had made these false statements, it’s tough to say, but it seems there was an attempt to smear the reputation (and thereby reduce the income) of the owner of the resort where the fish had been weighed. Which would essentially make Hayes an unlucky bystander.

“I’d pretty well given up on it,” the 81-year-old Hayes told Bassmaster, when the record was reinstated. “It’s good to be vindicated after all these years.”

The Internet pretty much created the myth of Hogzilla–and then worked to take it down. The purported story had an 11-year-old, Jamison Stone, shooting and killing a giant, wild, ferocious hog on a private hunting preserve in Alabama–a porker that tipped the scales at 1,051 pounds, in May 2007.

Widely circulated on the Web, Hogzilla photos looked surreal, with the boy dwarfed alongside the monster pig, and they sparked a flurry of de-hoaxing. This, from StinkyJournalism.org:

“Overwhelming evidence indicates that the Stone picture is a relative size illusion devised with the goal of making the pig seem bigger than it actually was. The larger photo shows Jamison Stone with his arms seemingly positioned atop the pig’s spine. This shot, however, has all the hallmarks of a photo trick seen often in travel photographs (like the ones taken in Egypt, where a giant pyramid is ‘magically’ held in the palm of the hand).”

What got almost no press was an old-fashioned investigation conducted by Warden Andy Howell, of the Alabama Department of Conservation. If the pig was truly wild (feral), killing it within a fenced game preserve might have been illegal. Howell contacted the preserve, which admitted the pig was a farm animal purchased four days before it was killed. Howell then located the pig’s previous owners.

“A family from a neighboring county had raised it from a piglet,” says Howell. “It was basically a brood hog and a pet. Its name was Fred. They’d actually let kids ride on its back. That kind of paints a picture of what you’re dealing with.”

Howell found that no laws were broken. By the end of the story’s run, the boy’s father, though still insisting the photos were real, indicated that he and his son had been incorrectly told that the pig was wild.

Several years back, an official measurer for the Boone and Crockett Club spotted a huge mule-deer rack hanging in a Canadian outdoor retail establishment. The store’s owner claimed the rack measured an astounding 407 1⁄8 inches, non-typical.

“The B&C official measurer couldn’t believe the score and asked if he could score it and enter the rack,” says Keith Balfourd, B&C’s director of marketing. “The rest of the story was that the deer was claimed to have been taken in 1899. So it was examined, X-rayed and ultimately rejected, in February of 1996. The suspicious nature of the antler configuration was the reason for the X-ray.”

Beneath the surface, the X-ray revealed a construction job that the 19-year-old from Vermont could only dream of–a rack held together with numerous screws and several long metal pins. Car-body filler putty was worked into the cracks and over the screw holes, and then all surfaces were stained.

“That thing was built with two to three sets of antlers,” says Balfourd. “If you look at the tops, they match from side to side. That’s actually a smaller four-point mule deer, where they chopped the main beam off and attached it to [another rack’s] main beam.”

The finishing touch: Smaller eyeguard points, likely sliced off a third rack, were also attached to the growing mount.

While a successfully faked-up rack could have some monetary value, Balfourd thinks the twisted recognition such a “hunter” might get is the bigger lure.

“Then there’s the just-see-what-I-can-get-away-with factor,” he says. “‘I’ve got an idea, and I think I’ve got the tools and the know-how to pull it off!'”

It might be a troubling trend, but one that few will find success with given the scrutiny of today’s record-keeping organizations.