Focus on these fundamentals and you won't whiff on a trophy buck. 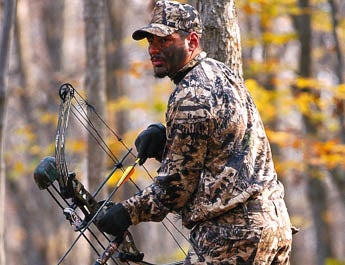 All season you’ve waited for a shot at a trophy. When the opportunity presents itself, you fumble and put the arrow 5 feet over the deer’s rack. Missing a buck in a critical situation is part of the game. We’ve all done it. The reason is simple: We’re overlooking a few bowhunting fundamentals. Study these basic solutions and you’ll be hauling headgear to the taxidermist instead of cursing another miss.

Maintain bow Comfort Scenario:
Shots in the woods are always tough; easy ones are rare. Instead of stopping where they’re supposed to, deer linger behind trees and bushes. A bow that’s too hard to draw will have you struggling to center and hold your sight pin in the kill zone while waiting for a clean shot.

Bow companies have taken nearly all of the energy out of cams as is physically possible. Bows that draw 70 pounds with 80 percent let-off zip arrows downrange at speeds in excess of 300 fps. These bows shoot fast without resorting to heavy and unmanageable draw weights.

Solution: Visit an archery retailer in your area and try every bow on the rack. When you find one that fits and feels right and is comfortable to draw and hold, go ahead and buy it.

Judging Distance Scenario:
I know I’ve harped on this one over and over again, but the major reason most bowhunters miss is because they haven’t learned to judge distances accurately.

The best way to mentally dial in the correct shot distance when you’re in the field is to practice doing it on the range and before hunting season. Eventually, judging distance will become second nature, but you’ve got to spend a lot of time eyeing targets and correctly estimating how far away they are.

Solution: Visualize the terrain you’re going to be hunting. What is the average shot distance? Practice shots at these distances and at distances in between. Also, treat yourself to a gift and buy a range finder this year. There are plenty priced well under $200.

Proper Dress Code Scenario:
Wind, rain, ice, sweltering heat and mosquitoes-all of these will affect your hunting abilities. Spending hours sitting in a driving rain without a rainsuit is going to make you miss when it’s time to shoot. Shivering in the stand because you don’t have a heavy coat is a prescription for failure; it will rob you of your physical acumen. Getting stiff muscles to react after being stationary in the cold is nearly impossible.

Solution: Rainsuits, warm outerwear, tree umbrellas, insect repellent and gloves make hunts bearable. If you’re able to ignore the elements, your hunts will be successful. Big bucks are often on the move in bad weather.

Beat Target Panic Scenario:
It’s happened to everyone who has taken a bow into the woods. The buck appears, you draw and your mind goes blank. Some inner voice tells your fingers to release. You’re jolted back to consciousness by the sound of rustling leaves as the buck’s tail waves goodbye to you and your arrow, which is stuck in a tree trunk.

For some reason, when we see an animal our brains often abandon us. Call it buck fever, target panic or what you will; the result is the same.

Solution: While it sounds almost Zenlike, you can minimize your target panic without ever tugging on a bowstring. Take the time to visualize the steps involved in executing the shot (a smooth draw, settling into your anchor point, target acquisition and release). Once you’ve trained your mind to focus on the shot sequence and not the animal, you’ll beat buck fever.

Infrequent Fliers Scenario: Broadheads, it seems, have a mind of their own. These flying razors have a knack for sailing off target even if the shot is perfectly executed. Most often, arrow spine is the culprit behind an ill-tempered broadhead.

Spine simply means arrow stiffness. Arroows contort upon release: Shafts that are too flexible bend excessively, while stiff shafts don’t flex enough. Either way, this is a simple problem to solve, even though many bowhunters have a hard time diagnosing it.

Solution: Have a pro spec your arrows off an arrow spine chart. It’ll save you considerable heartache, and your broadheads will be punching the bull’s-eye like they should.

Perimeter Shooting System
Get a friend to mark the perimeter of your effective range around all of your tree stands or ground blinds.

If you’re comfortable out to 30 yards, range a spot around each stand that’s 30 yards away. Mark it with a limb, rock, pinecone or range marker. Mark three or four spots around each stand with the same type of object. Place them the same distance away as well.

Do this for each sight-pin distance. This will give you a perimeter of known distances around your stand or blind.