It's commonly said that there are more antelope than people in Wyoming, where the human population stands at about 460,000. 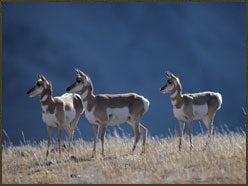 The state has more than 100 antelope units. Each has its own season and management objectives. In some, you may be able to take one or more doe or fawn antelope in addition to a buck. Typically, seasons last only a couple of weeks, but in some units they may run at least a month.

As in most western states, Wyoming’s best units are available on a draw system, but it is the only state that reserves some units where tags can be purchased over the counter. Units known for trophy antelope and plenty of public land are the toughest to draw. Generally, these are in the southern tier along Interstate 80 and close to the Colorado border, though big bucks are commonly found in the Red Desert area near Lander and over to Casper.

One of my favorite spots has been in the Medicine Bow/Rawlins region, where there are decent bucks and lots of BLM land. I’ve taken a number of 14- and 15-inch bucks in those units and seen at least two 16-inchers taken by other sportsmen. To hunt here, you must take your chances in a lottery draw, but the odds are fair that you’ll get your tag.

If you want a surefire license, look to northeast Wyoming in the Gillette area. There’s more private land here, yet plenty of antelope and tags are often left over after the drawings. Many landowners charge reasonable trespass fees, but you may need to settle for less than trophy-size bucks in units that are easy to access.