Be your own guide for an Alaskan adventure. 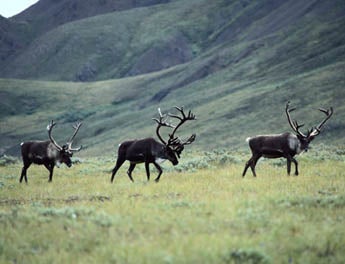 Every kid who picks up an outdoor magazine dreams of hunting in Alaska. In terms of big game, only Alaska offers such a variety of species, including the herds of majestic caribou. The state also has millions of acres of wild, game-rich lands open to the public. Most hunters in the lower 48 consider such a trip unattainable-a pricey venture that requires guides and all sorts of extra costs. Fortunately, with the exception of those species where state law mandates a guide, an Alaskan hunt can be experienced for the cost of air transportation to the state, provisions, an air taxi ride and license fees.

Taxi to the Backcountry
My dream hunt to Alaska came true a couple of years ago when a buddy and I went after caribou. As the red Super Cub that had delivered us to the outback vanished into the distance, it dawned on me that I was truly in the middle of the Alaskan nowhere. My friend Bob Condon and I had been dropped off near a tundra lake situated on the floor of a valley-a natural funnel we hoped some caribou might pass through. After the camp chores and a quick meal we hit the sleeping bags, eagerly anticipating our opening hunt the next day.

Condon and I were the odd couple in terms of our hunting implements. He showed up with a rifle, while I had brought along my favorite longbow. Because the different equipment required different approaches, we split up the next morning. I opted for the ridge near camp, as it had more stalking cover, which would enable me to get within bow range of a caribou. Condon worked his way along the edge of the ridge near the lake, which provided the perfect view of the valley floor for a rifle shot.

A couple of hours into the hunt I had already passed up an easy shot at a cow and had seen several other caribou through my binocular. Across the lake, a pair of high-racked bulls and a few cows trekked along at the water’s edge. One of the bulls then made a mistake. With his stubby tail held aloft, he swam to our side and within range of my friend’s rifle.

From my position I watched as the bull sloshed out of the lake and up the bank. Bob’s shot sounded like a soft pop from where I sat, but the bullet did its job and the bull went down. Elated by our first day’s success, I climbed down the ridge and met Bob at the bull. We were only a couple of hours into our hunt, and already packing a caribou! That evening, fresh loin steaks cooked over an open fire under the cleanest sky in the world capped off a wonderful day.

So began a week of caribou hunting in which we were both successful. What made it even better was the knowledge that we did it on our own and enjoyed America’s last wilderness without having to take out second mortgages on our homes. Those who can go it alone without a guide and are willing to do the planning and research themselves can make a dream trip like this an inexpensive reality.

Planning the Hunt
The key to an Alaskan hunt, and the bulk of the expense, is getting there.

In Alaska, the best way to reach caribou country is by air. Most hunters opt to hunt the Mulchatna or Western Arctic herds, as they provide the best opportunities for success. Typically, hunters are dropped off at their campsites by an air-taxi service, then picked up after a week or so in the field.

Air-taxi services operate out of Anchorage, Soldotna, McGrath, King Salmon, Iliamna, Kotzebue and Fairbanks. Most are reputable flight services that can be counted on for a quality trip; the bulk of research and preparation for an Alaskan caribou hunt lies in selecting one.

Air taxis vary in the way they operate. Some equipped with floatplanes will fly from Anchorage or Soldotna and drop off groups of hunters on tundra lakes. Other services use smaller planes like Super Cubs rigged with tundra tires. There are also air-taxi outfitters equipped with both types of planes that fly hunters to aase camp and then, using smaller planes, ferry them out to their hunting camps.

Operating costs of aircraft vary based on the size of the plane. A Beaver floatplane might cost more than $1,000 an hour to operate, a Cub around $350. The more hours it takes the pilot to fly hunters to camp, check on them while they are in the bush and ferry meat and equipment out, the higher the cost of the trip. Hunters should ask air-taxi services to provide details, in writing, of what is covered by the cost. For example, does the air taxi check on hunters in the field during their trip? Will it fly meat out if hunters have game down? How familiar is the pilot with the area you’ll be hunting, and is the service knowledgeable in the availability and general movement patterns of the caribou herd? What is the maximum weight for each hunter’s gear? What is the terrain like at the hunting location?

It is extremely important to get the names of previous customers from air-taxi services. Contact the references for their observations.

Research is also required for commercial carriers. Additional expenses can be incurred on some commercial flights. A hunter who flies from home in the lower 48 to Anchorage, and then flies on to Kotzebou, for example, might have an unexpected surprise on the return trip. Some of the carriers that fly from Anchorage to other destinations in Alaska charge an extra $300-$400 for antlers and meat on the return flight. Airlines might also charge extra for meat hauled from Anchorage to a hunter’s final destination.

The planning process for an Alaskan hunt must include contacting the commercial airline and any additional airlines flying from Anchorage to find out what all of the expenses will be. Factor in the cost of returning with a couple of sets of antlers and plenty of meat if the trip goes well.

Whether you have anything to take back except your equipment and dirty hunting clothes often depends on how flexible you are when it comes to altering plans. If, when you reach Alaska, sources tell you that the area you had planned to hunt is practically devoid of caribou, be prepared to travel to an alternate site. Obtain good maps of the area and take them with you to camp. Hunting Tips Once you’re out on the tundra, the hunt becomes a matter of watching and waiting. Besides your trusty deer rifle, you’ll need quality optics to take caribou. They move faster than a man can walk; it’s a matter of first spotting them, then getting ahead of them for a shot. Starting out from high ground makes spotting them easier.

One concern every hunter in Alaska should have is bears-browns or blacks. Bears might be bolder in the outback than they would be if you were staying closer to a community.

Find out what the rules are regarding cleaning game and removing the remains. Clean game where it fell; take only the meat and antlers back, if practical. Then wrap the meat and antlers in a blanket or tarp, tie it at the corners and haul it up with a rope slung over a tree limb a hundred yards or so away from camp. Use caution when moving through dense brush, and especially when traveling through an area where there is an animal carcass. Always carry bear spray. Eat meals and keep provisions away from your sleeping area. It’s hard to believe that you can get lost on the tundra, but it can happen. Carry a compass, waterproof matches, drinking water or a purification system, an emergency blanket, signaling tools and enough high-calorie food to last a day or two. A GPS unit can be a lifesaver if the fog rolls in.

Alaska must be experienced to grasp the full nature of its wild grandeur. It is a land of sweeping forests and snow-capped mountains whose melting glaciers give birth to rivers teeming with salmon. Alaska is also home to the tundra, a featureless place accented by the ancient scars of caribou trails still used today by these deer as they make their annual migrations.

Hunting for caribou in this vast land can be the trip of a lifetime, and you don’t have to pay bills for the rest of your life to experience it.ake their annual migrations.

Hunting for caribou in this vast land can be the trip of a lifetime, and you don’t have to pay bills for the rest of your life to experience it.