Book Review: Lost in the Jungle

A harrowing true story of survival in the Amazon rainforest 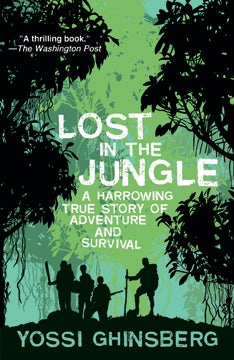 The problem with first-person survival narratives is that you know the ending even before you start reading the book: The author obviously survived the ordeal he’s going to spend the next 300 or so pages recounting, otherwise, how did he manage to put pen to paper?
In such books, the author is required to captivate the reader with the process of survival and the terrifying details of the experience. Lost in the Jungle–A Harrowing True Story of Survival, by Yossi Ghinsberg ($14.95; skyhorsepublishing.com), proves to be an exceptional tale of a courageous escape from an absolutely horrific ordeal.
In 1981, the author set out with three other travelers into the heart of the Amazon rainforest on what was to be a dream adventure. The foursome’s quest soon fell to pieces as they became hopelessly lost in the dense forest, and decided to split into pairs in an effort to expedite their rescue. Ghinsberg and his partner were then separated following a rafting accident, leaving the author to fend for himself for weeks in the heart of the South American rainforest without a map, a knife or any survival training.
If nothing else, Lost in the Jungle is a great cautionary tale for anyone heading into the wild for any period of time. Ghinsberg’s crew had what they thought was an airtight plan and itinerary, but it didn’t take long for disaster to strike, and when it did the cascading peril nearly cost everyone their lives. Lost in the Jungle should by no means be considered a survival guide–some of the decisions made by the adventurers during their ordeal were questionable at best–but it stands up as a well-written and entertaining story of the will of man and the perseverance we all are capable of showing in the face of disaster.