Have you tried everything from soap shavings to coyote urine to keep hungry deer out of your vegetable garden and... 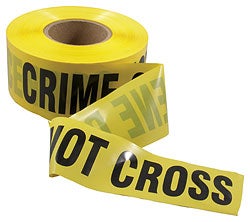 Have you tried everything from soap shavings to coyote urine to keep hungry deer out of your vegetable garden and flowerbeds?

Oxon Hill, Md. gardener Chris Erwin, who says he came up with the concept after drinking “a couple of beers,” claims deer haven’t bothered his expansive vegetable plot since he surrounded it with the neon-colored tape used by cops to mark crime scenes.

Ervin says he had grown weary of his annual battle with an estimated 50 whitetail deer that commonly visited his property on a nightly basis, gobbling his flowers, ornamental shrubs and vegetables.

Then, one afternoon while mowing the lawn and admittedly inspired “by a couple of beers”, Ervin says solution to his deer problem just came to him.

Ever since he first encircled his plot of corn, beans, melons, collard greens and squash with the bright tape two years ago, the deer have respected the marked boundary like the respectful public does at an actual crime scene.

“I wish I had patented it because you can see how pretty the garden is,” Ervin proudly told a Washington, DC-area television station recently. “They don’t touch it. They’ll eat everything else around here but they don’t touch it.”

Ervin speculated that the motion of the iridescent tape in the breeze is enough to keep the wary deer from crossing the boundary.

To improve on Ervin’s idea, here at the Newshound we’ve decided a chalk whitetail buck outline on the ground behind the tape would be a nice added touch. The idea just kinda came to us after a couple of beers.