What to Do When a Hit Deer Crosses the Property Line

“What do you do if a hit deer runs onto the neighbor’s property?” A good question. It’s one I get... 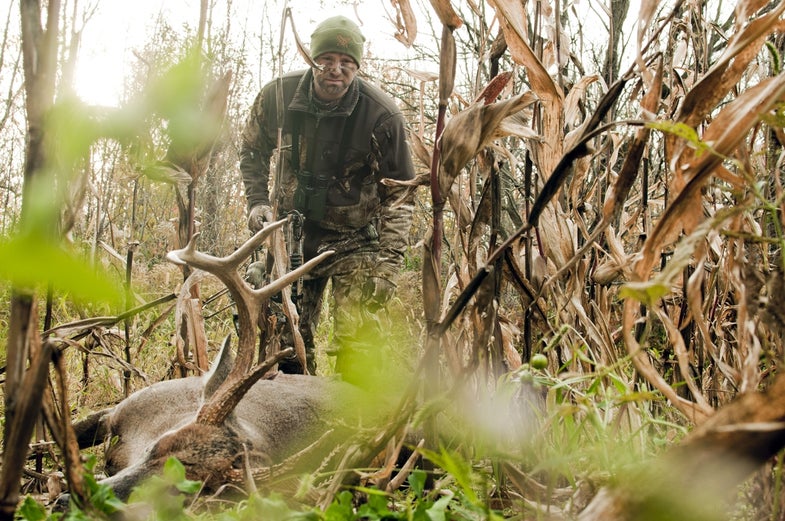 “What do you do if a hit deer runs onto the neighbor’s property?”

A good question. It’s one I get asked often.

The answer: It depends.

Sometimes you’ll have neighbors who are hunters and understand that these things sometimes happen. Often, however, I find myself hunting on small chunks of land where deer retrieval would be quite problematic were the deer to leave the property.

Hunters in suburban/urban settings deal with this scenario often.

I recently saw a story in the Buffalo News about a Lancaster, NY man, Sean Petronsky, who hunts his backyard woods with a longbow.

His neighbors who share the subdivision with him are doing all they can to put a stop to it.

Petronsky owns a section of land that is 50 feet wide and 1,731 feet long. In bowhunting terms, that’s about 16 yards wide and 577 yards long.
Petronsky will have a pretty tough time keeping a deer on his property after a shot unless it runs the length of his ground.

That might be an extreme case. But it’s one worth thinking about.

I hunt a couple of places where I know accessing the neighboring property, should a deer run onto it, would be a no-go. Laws vary widely by state – in some the landowner is under no obligation to allow you to access their land to track.

Since I hunt smaller areas much of the time, I always take tracking and retrieval into account. That’s one of the reasons I don’t hunt tight to property lines (besides the fact that I find it disrespectful).

My rule of thumb is this: If I deflate a deer’s lungs with a broadhead, I’ll need about 75 yards of recovery distance. In some cases, 50 would be fine. In others, 100 is better. But the average distance travelled is around 75 yards from the base of the tree.

Thus I will not hunt closer than 50 yards to a property line – the deer would then be between 60 and 80 yards from the line because I also don’t shoot towards a boundary.

Is this fail-proof? Nope. Things happen even when you make an “ideal” shot.

That said, I don’t allow the worry of an animal crossing a property boundary keep me from hunting small parcels unless I have explicit reason to worry. If I did, I’d have a pretty hard time finding a place to hunt. Instead, I do all I can to get as much information as I can prior to hunting and that starts by knowing state regulations.

If I know state law allows me to retrieve the deer, then I can rest easier. In states where access is not required, I plan accordingly. In both cases, I always ask neighboring landowners about retrieval access and try to position stands in a manner that make it less likely that a deer will run where it shouldn’t.

Do I change my gear? No.

I’ve heard some say that they’ll use the largest mechanical head they can get while bowhunting to “shorten” a blood trail.

I’ve heard gun hunters say they would simply “shoulder-shoot” the deer so that it can’t run.

I don’t have an opinion on either tactic. Maybe a big broadhead will kill a deer faster. Or maybe you’ll hit the deer in a spot you didn’t intend and it won’t matter much anyway.

Maybe you can drill a deer at the point of the shoulder and drop it. Or maybe you’ll be excited and rushed and pull that shot an inch or two.
So here’s what I do: I shoot a broadhead that I have great confidence in from a bow that I’ve tuned and set up to my liking.

I try to make the very best shot I can make, each and every time. And I hope that deer runs in the direction I want and that it tips over dead in short order.

If it doesn’t? Then I do everything I can to recover the deer within legal limits. I’m not sure what more a hunter could do.