In lightly hunted territory, when toms are gobbling hard and hens are scarce, turkey hunting can be–dare we say it?–easy.... 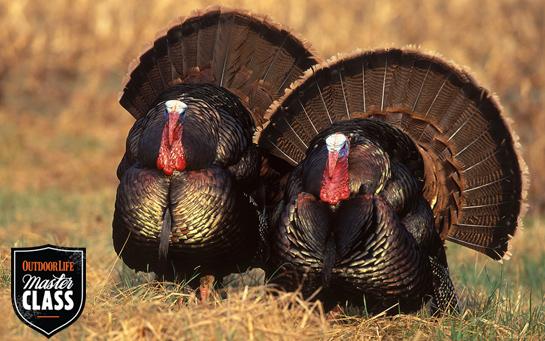 In lightly hunted territory, when toms are gobbling hard and hens are scarce, turkey hunting can be–dare we say it?–easy. In these areas birds respond to calls, strut regally and march boldly into range.

But then there’s the other 95 percent of turkey outings. Birds hang up just out of range, walk the other way, get henned up–you know the drill. To overcome these real-world experiences, we’ve rounded up the following 10 tricks. Use them at your discretion.

“Set up there,” Jim Clay whispered as he pointed to a knoll next to an open field in the dim gray light of predawn. “I’ll go down in the hollow in case he heads to the creek.”

Jim Clay, founder of Perfection Turkey Calls, has fooled countless toms over the years, but sometimes a crafty old bird like the one we were after that day requires double-teaming. I don’t mean double-teaming in the usual sense of having one hunter in front to shoot and one in back to call. This two-person strategy entails setting up apart to cover the most likely routes the bird will take when it leaves the roost. Clay had tried to kill this 3-year-old gobbler several times over two seasons, but every time he set up near the field, the bird headed toward the creek, and when he waited near the creek, the bird headed for the field. This tom was too sly for just one hunter…which is where I came in.

Hunkering back against a big white oak near the field, I tree-called at first light and the tom gobbled back. Though Clay’s champion-caliber calling sounded sweeter down by the creek, this morning the tom decided he’d stay on top. Less than 30 minutes after first light I shot the largest Eastern bird I had ever taken. He had a 12-inch beard and 1 1/2-inch spurs.

Scattering the flock is a tactic commonly associated with fall hunting, but at times it can be worthwhile to flush birds in the spring, too. If you’ve encountered a group of gobblers and hens but can’t lure them in, moving in and breaking up the birds can pay off. As you would in the fall, make this a quick and decisive move. Walk swiftly or run with an unloaded gun, yelling loudly to scatter them.

Just as in autumn, if the flock has been split up, they’ll try to get back together. With artful calling you just might be able to entice one of the big gobblers back in.

We all like to call in birds. It’s the essence of the sport. But when you’re dealing with a wary old tom, sometimes you have to get sneaky. Try patterning call-shy birds by glassing them from a distance, listening to their calls or studying the sign they leave.

One good place to try this is in a field. When you see birds in fields they’re often with hens and are difficult to attract. They know where they’re going and aren’t likely to change their route to come to your calls. The solution is clear: Don’t try to change their pattern; just read it and get ahead of them. Place a decoy or two on the edge of the field if you can do it without being seen.

A friend and I discovered this trick late one morning after walking our legs off and calling fruitlessly to henned-up toms. We were just about to quit when we saw a flock of four gobblers and two hens in a field. We called. They ignored us. But as we watched, we saw that the group was feeding steadily down the length of the field. We circled around fast and set up at the end of the field. Within 15 minutes, two toms were on the ground.

Sometimes heavily pressured birds or old, smart toms may be wary of regular turkey calling. This is the time for non-vocal turkey sounds–either by themselves or mixed with quiet calling. Reach down with your hand and scrape the leaves back like a hen would. You can also flap either real or artificial turkey wings. Will Primos, founder of Primos Hunting Calls, showed me this tactic on a hunt in Mississippi. Primos carries two turkey wings with him and flaps them as he clucks and cutts loudly to imitate hens coming out of a tree.

Keep your shotgun ready when you try this. At times this excites gobblers so much that they fly down and land within easy shooting range. The wings can also be used to beat the ground as part of a fight simulation. Try this with aggressive purrs on push-pin box calls.

Anyone who has hunted turkeys more than a few times has had a gobbler come in partway, but hang up just out of range. Try this trick to kill birds that do this: Slip away from the bird, then take a long circular route around him and set up where he came from. Since the bird has already been there, he’ll feel safer coming to your calls in that direction.

After opening day some turkeys have felt so much pressure at dawn they’re reluctant to come to calls early. Yet a few hours later, when most hunters have given up, they relax a bit.

There’s a biological reason why hunting late works. Hens will hook up with gobblers to breed early, but often leave to feed or sit on a nest. Toms are still fired up but find few willing mates later in the morning.

The natural tendency when hunting is to move through the woods with the sun at your back. It’s easier to see that way. But if you want to make a tom more eager, sometimes you have to flip this arrangement around. Avoid sitting where a bird has to look directly into the sun as he approaches. Give him the advantage and he just might come running in.

Once most hunters kill a gobbler they assume they’ve taken the bird that was claiming the area and head for another spot. Don’t be too hasty. If the terrain and cover was attractive to that tom, chances are another one will move in and claim the spot as soon as the more aggressive bird is gone. In fact, the other gobbler was probably in the area all along but remained silent.

Rob Keck was perplexed. That seldom happens to the executive vice-president of the National Wild Turkey Federation where turkeys are concerned, but he couldn’t quite understand why we weren’t able to provoke a single gobble on a prime property in South Carolina one particular spring morning.

To avoid being outfoxed, he turned to one of his tricks for difficult situations: He set up in a hot area where he’d seen birds recently and made a veritable symphony of turkey talk. Using three calls at once, Keck made my ears ring as I sat next to him against a thick oak. Half an hour later, though, all that calling was more than an old boss tom could resist. He came skulking into range with his beard swaying beautifully in the morning sunlight.

This ploy lies at the opposite end of the spectrum from the aggressive, multiple-call approach. Some birds just aren’t very vocal and don’t like hens that are. Then there are gobblers that have been shot at or called in and spooked. Both are candidates for a pared-down calling approach that uses the simple cluck and nothing else. Glass, slate, box and mouth calls all make fine imitations of this basic call. See what seems to work, then repeat it. Much of turkey hunting is simply figuring out what the toms want.