How to Scout for Turkeys 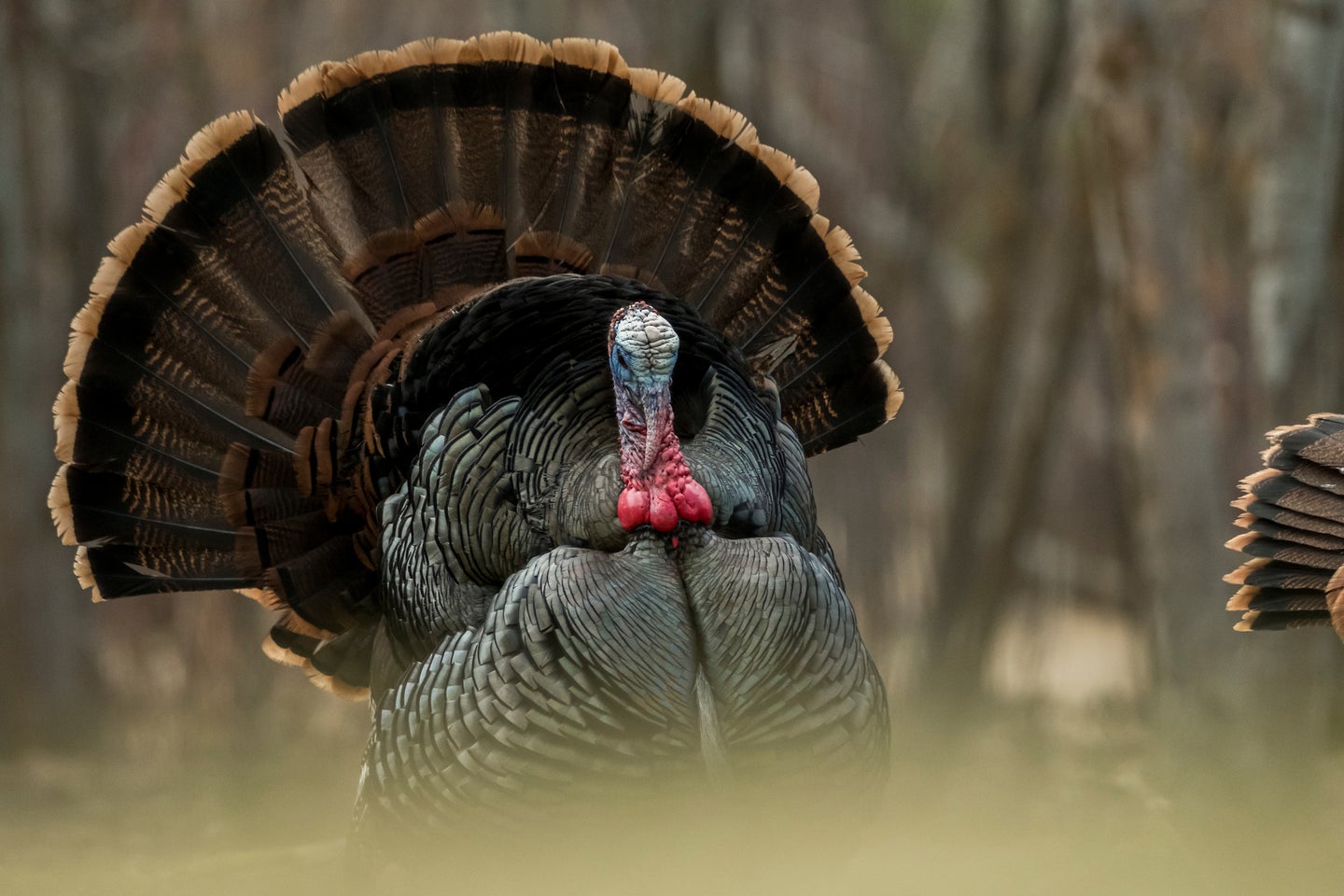 Most turkey hunters know that scouting is important, but many hunters (even experienced ones) don’t really know how to scout for turkeys. Sure, most folks can find turkey tracks, spot longbeards strutting in a field, and hear gobbles from a distant ridge, but the key to effective turkey scouting is to use this intel to develop a plan that helps you go out and kill a turkey—not just figure out where they live.

I’ve been lucky enough to be able to chase turkeys all over the country alongside some of the best turkey hunters in the game. The one thing they all had in common was the ability to predict what the birds were going to do and then adapt quickly when things didn’t go according to plan. This comes from years of experience and seasons upon seasons of scouting. Here’s what I’ve learned about how to scout for turkeys and punch more tags this spring.

When to Start Scouting for Turkeys

But if that doesn’t work out, you’ll want to scout your way through the season. I see a lot of hunters sacrificing scouting time for hunting time. But that’s a mistake. It’s more useful to find birds and hunt productive areas than to keep hunting the same spot for days on end hoping a tom will show up.

How to E Scout for Turkeys

Your turkey scouting mission begins with a digital mapping app. Use an app like onX or HuntStand to identify likely places to hunt. If you’re targeting public land, use your app to locate all the public parcels in the area you intend to hunt. Then rank each property on a scale of 1 to 3: 1 = high, 2 = mid, 3 = low.

High-value parcels have the following features:

Mid-value parcels have the following features:

Low-value parcels have the following features:

Once you’ve got the public land properties in your area ranked, then you can scout them, starting with the highest value targets.

If you’re a private-land hunter, it’s still useful to E scout for turkey. Using your mapping app, look at the neighboring properties to identify likely roosting and feeding areas. Pick out potential travel corridors between the neighbor’s property and the property you’ll be hunting. Also, identify some nearby private properties where it’d be worth asking for hunting permission.

Identifying the signs and droppings that turkeys leave behind is key to understanding how to scout for turkeys. These are the most important types of turkey sign:

Tracks: Turkeys leave obvious, large tracks. Turkey tracks are easiest to spot in mud, sand, and snow. On sandy, dusty ground you can sometimes see imprints from a tom’s wing feathers on either side of his tracks (when a tom struts the ends of his primary feathers often brush the ground).

Scratching: Turkeys scratch in leaves looking for acorns and insects. There will often be heavy scratching near roost sites. Other critters (like deer and raccoons) also root up leaves, but turkeys scratch down to the dirt and you can often see their claw marks in the soil. Also, if you find turkey droppings near scratching sites, you know the scratching is from turkeys and not another critter.

Dusting sites: Turkeys take dust baths just like other birds. Sometimes turkeys will dust in the same spot over and over, creating a depression in the ground.

How to Find Where Turkeys Roost

Identifying turkey sign lets you know that turkeys are in the area, but your scouting mission doesn’t end here. You want to find where gobblers roost. The best way to do that is to be in the woods before dawn and at dusk, listening for gobbles.

Each night turkeys roost in large trees to avoid predators. They typically gobble shortly after they fly up in the evening and in the morning before they fly down. Often, a gobbler will roost in the same area, or even on the same limb, night after night. If you can locate a few different gobbler roosts and avoid spooking birds in the process, you’re on your way to a successful season.

The best way to find roosted turkeys is to go out on a quiet (not windy) morning and be in the woods well before dawn. Hike to a high spot where you’ll be able to hear long distance, and then sit down and listen. You can also slowly and stealthily walk down logging roads or hiking trails listening for gobbles as you creep along.

Once you hear a distant gobble, move closer to pinpoint the bird’s location. Ideally, you want to identify a 50-yard radius of where the tom is roosted. But don’t get too close. If you blow a gobbler off his roost, there’s a good chance he won’t be back. Locator calls like owl hoots or coyote calls will help you get toms to shock gobble so you can zero in on their location.

When you hear a roosted gobbler listen for hens with him. Also, listen closely for other gobblers nearby. A dominant tom that roosts near a flock of hens is a very tough bird to hunt. But if you hear another gobbler within a quarter mile of the main flock, he’ll usually be an easier bird to target. Sub-dominant toms typically don’t gobble as often, but on the upside, you won’t have to call him away from a flock of hens.

When it’s finally time to hunt the roosted gobblers you’ve scouted, follow the tips in this video from Aaron Warbritton of The Hunting Public.

How to Find Turkey Feeding Areas

Once you find a few roost locations, you’ll also want to locate major feeding areas. Sometimes this is very simple: turkeys like to feed in agricultural fields and in fields with new, green spring shoots. But turkeys will also feed in hardwoods (look for signs of heavy scratching) and in fallow fields where they’ll pick bugs out of the grass. A good way to identify feeding areas is to drive country roads mid-morning and look for turkeys in fields. Or, if you’re in open country, get to a high spot and glass the surrounding area. If it’s legal, set up a trail camera or two in likely feeding areas. Unpressured turkeys can be easy to pattern around agricultural fields. But turkeys that see a lot of hunting pressure will be much more challenging to pin down.

How to Find Turkey Travel Routes

Turkeys (just like deer) will take the path of least resistance as they travel through terrain. Turkeys are a little more likely to rove around the landscape, so finding travel corridors that always produce is tricky. That said, once you’ve identified roost sites and likely feeding areas, it shouldn’t be too difficult to guess how turkeys are traveling in between the two. Travel routes are great places to hunt mid-morning and late afternoon (where legal) when turkeys are wandering around. Turkeys use the following features for travel routes:

Once you’ve found a few good travel corridors (they should be covered in tracks), place trail cameras there if legal. Remember that turkeys are shorter than deer, so your cameras should be aimed lower, and you’ll want to select camera setting with a minimal delay between photos (one second is about right) so that your camera will capture all the birds in a flock that cruises by. If you set your trail camera in a field, it’s ok to go with a longer delay between photos since the birds will likely be mulling around.

There are a few common mistakes that many turkey hunters make while scouting. The most common is just driving backroads, blasting a crow call, and hoping to get toms to shock gobble. This strategy can work, but it’s mostly ineffective in areas where there’s hunting pressure. Turkeys hear your truck coming, they hear you slam the door, and they hear you saying to your buddy, “where are all the damn birds?” They won’t run from these noises, but they won’t gobble either.

Similarly, many hunters do too much turkey calling before the season. You do not want to call in a gobbler before the season starts. This only educates the toms you want to hunt. Instead use owl hoots or crow calls to get turkeys to gobble, but an even better strategy is to just shut up and listen. Let those toms gobble on their own and then sneak closer to pinpoint their position. Listen for real owls and crows, which will get gobblers to sound off.

Be sneaky when you’re scouting in the woods. Wear camo or earth-toned clothing and walk slowly and quietly. When you stop, make sure your back is against a tree. Treat scouting missions just like a hunt. Whatever you do, do not blow turkeys off their roost.

Now that you’ve got an idea of where turkeys roost, where they feed, and how they travel, you can start putting together a solid hunting plan. If you’ve located a lone tom, get in tight to the roost and call him in to gun range. If you’ve scouted a tom with hens, back off the roost a little and try to catch them on their way to a feeding area. If your morning hunt doesn’t work out, try to strike gobblers near the feeding areas you’ve located or set up near the busiest travel route and wait for turkeys to wander through.

How to Scout for Turkeys on Public Land

To scout for turkeys exclusively on public land, follow all the steps outlined above, but also plan on scouting other hunters. Your goal should be to find gobblers in locations where other hunters won’t find them. Many hunters are unwilling to cross streams, marshes, or even hike over steep ridges to reach turkeys on the far side. E scout for natural barriers like this and then start your efforts there.

Look for hunters sign (boot prints and blinds) just like you’d look for turkey sign. Avoid any areas that are getting a lot of foot traffic, even if you find birds there before the season starts.

Likewise, pass up gobbling turkeys near busy parking lots or roads because they will certainly attract other hunters on opening morning. If any public land spot seems too easy, it probably is (read more about hunting turkeys on public land here).

If you bump into other hunters while scouting, be friendly and talk to them about their plans and share yours. It’s far better to work together and spread out than it is to compete for the same birds.

A final tip on how to scout for turkeys on public land: It’s always worth asking private landowners for permission to access public land through their property. Farmers and landowners are usually more willing to let you simply walk through their property than they would be to let you hunt it. Taking a shorter route through private land will give you an advantage over all the other public-land hunters who will be starting from the same parking lots and trailheads.