Wardens with the Wisconsin Department of Natural Resources recently arrested and charged 13 Milwaukee-area men with gross overfishing for keeping... 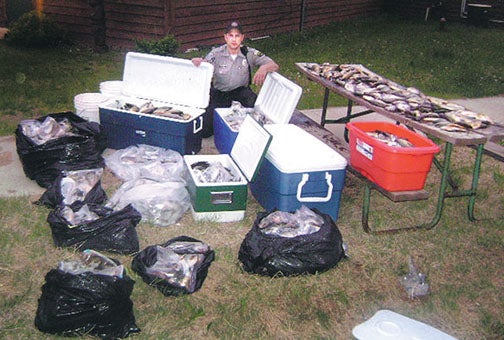 Wardens with the Wisconsin Department of Natural Resources recently arrested and charged 13 Milwaukee-area men with gross overfishing for keeping more than 2,000 panfish over their limit.

Acting on an anonymous tip, wardens discovered the men, ranging in age from 34 to 74, with 2,238 bluegill, crappies and other fish over their limit on the Chippewa Flowage in Sawyer County on May 21.

The men, who were reportedly part of a church group, face a potential forfeiture and restitution totaling $71,283 and revocation of fishing privileges, according to a DNR spokesperson.

“Based on our investigation so far, we believe there may have been others involved in this gross over-bagging case,” Sawyer County conservation warden Sue Miller said.

According to a report in the Eau Claire Leader-Telegram, the Chippewa Flowage is home to the world-record muskie, though panfish have come on strong in recent years.

“Ten years ago nobody was talking about bluegill fishing on the Chippewa Flowage,” said DNR fisheries biologist Dave Neuswanger. “Now it is the best bluegill fishery in the Upper Chippewa Basin.”

The Chippewa Flowage has a 25-fish bag daily limit, of which only 15 may be crappies. The legal possession limit of panfish is 50, or a two-day bag limit.