Aaron Guthrie might have set a new Minnesota record fish when he reeled in 19.5-pounds of ugly. The 35-year-old Bemidji... 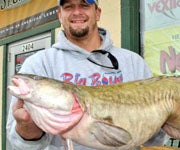 Aaron Guthrie might have set a new Minnesota record fish when he reeled in 19.5-pounds of ugly. The 35-year-old Bemidji resident was fishing with his uncle, Rollie Jones, in his icehouse on Lake of the Woods Friday night when he landed a burbot, or eelpout, that could beat the previous state record fish by two ounces.

“I knew it was a ‘pout right away, but I didn’t realize how big it was,” Guthrie told the Star Tribune.

Despite its size, Guthrie managed to land the fish after a short five-minute fight.

Also known as mariah and lawyer fish, the ugly as sin burbot is mostly shunned by anglers because of its appearance and its tendency to snake around anglers’ arms when caught. Minnesota Department of Natural Resources assistant area fisheries supervisor Dennis Topp said that despite the fish’s less than attractiveness appearance, the fish tastes like “…freshwater cod, with good white, flaky meat.” Topp added, “I personally don’t think they’re slimier than a northern. But people get nervous when they wrap around their arms.”

Gee, I wonder why.