After years spent "chasing the Queen," Nolan Sprengeler and his friends finally found her last Monday 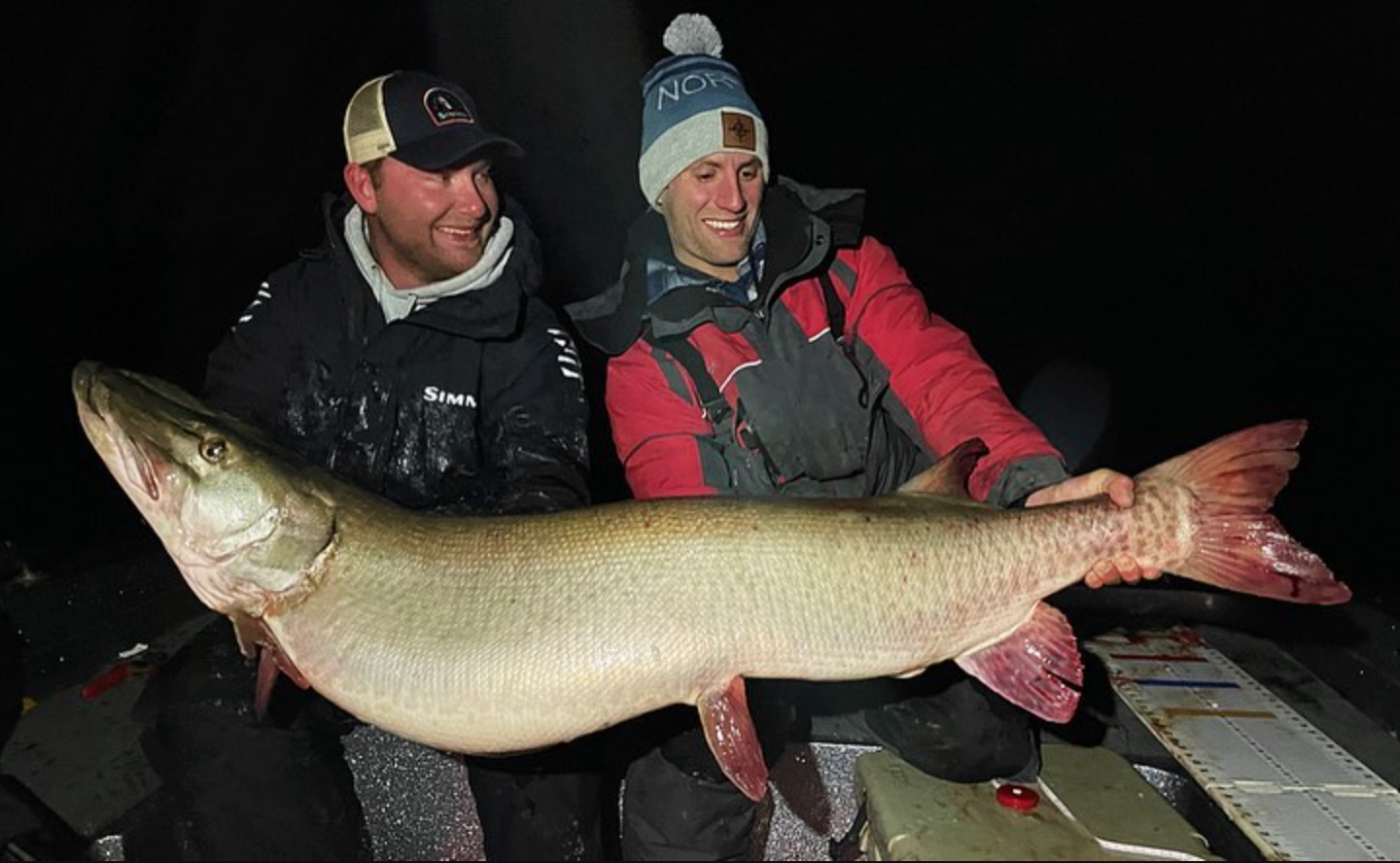 Nolan Sprengeler (left) and Kevin Kray hold up the potential state record muskie, which came in at more than 55 pounds. Zack Skoglund
SHARE

Dogged determination is a hallmark of every great angler. It’s the inclination to pursue “the one” year after year, and to go fishing when the conditions keep everyone else off the water. It’s also what led Nolan Sprengeler and his two fishing buddies to catching a potential state-record muskie in Minnesota last week.

Sprengeler caught the fish in Lake Mille Lacs around 9 p.m. last Monday, Nov. 22. The monster muskie has not yet been verified as a state record by the IGFA, but it stands to beat the current state record of 54 pounds, which was set in 1957 on Lake Winnibigoshish. Sprengeler’s fish measured 57.75 inches in length with a 29-inch girth, and weighed 55 pounds, 14.8 ounces.

The 27-year-old angler from Plymouth, Minnesota, tells Outdoor Life that he arrived at the boat ramp last Monday evening with two of his closest fishing buddies, Kevin Kray and Zack Skoglund, only to find a half-inch of ice coating the lake at his normal put-in. He says they drove around the lake, stopping at three other ramps that were even more frozen over, before heading back to the first spot and pushing on through the ice.

“We were like, ‘Well, if we want to go for it, we’re gonna have to break some ice,’” Sprengeler says. “So we grabbed the spud bar and chopped open an area to get the trailer in.”

The sun had already set by the time the three anglers motored to their first fishing spot in Sprengeler’s 21-foot fiberglass boat. He says that they fished the next couple of hours without much action, but they held out through the bitter cold until the moon rose around 7:30 that evening.

“We started fishing some spots, and it was a couple days after the full moon,” Sprengeler recalls. “So there it is in the sky, and it’s about 9 o’clock. We were just reminiscing…and I was down to my last rod and reel that wasn’t frozen solid, so I was pretty well over it for the year. And then I got bit way on the far end of a cast, and that was that.”

He says they were able to net the muskie after a brief battle, but that he didn’t realize how huge the fish was until they started measuring it.

“After some quick calculations, we’re like, ‘Yeah that’s for sure a state record,’” Sprengeler explains. “But it’s also the catch-and-release record, which is what I really wanted to get.”

They spent the next hour trying to revive the fish, which was hooked deep in the gills, but the three fishermen eventually realized that it wasn’t going to swim away. Regardless, Sprengeler says they all agreed that the best way to remember and respect the muskie was to bring her aboard and try to get her certified.

Then the race began to get the fish weighed in time. Which, as it turns out, was going to take even more determination.

The crew returned to the put-in to find that the lake had re-frozen, and Sprengeler was forced to nose his boat through the ice in order to get it back on the trailer. With this accomplished, it was now close to midnight and the three Minnesotans started looking for a scale big enough to weigh their catch. They reached out to local deer processors and meat markets, but were unable to find a proper scale. So they got in a couple hours of sleep before continuing their mission the following morning.

They eventually got in touch with a UPS store in Golden Valley and were told to bring the fish in.

When Outdoor Life spoke with Sprengeler, he had already dropped the fish off at a taxidermist to get a traditional skin mount and some replicas made, and he was on his way to the Minnesota Department of Natural Resources. He brought with him the fish’s cleithrum, which is a special bone located near the gill plate that biologists use to determine the age of the fish.

The devoted muskie fisherman says he’s been pursuing the freshwater giants for more than a decade, but that he and a few close friends have really been focusing on the late fall period on Lake Mille Lacs for the past few years. It’s during this cold, pre-winter period that the lake’s ciscoes start showing up at the rock reefs.

Sprengeler says the big muskie really key in on these oily, footlong baitfish, and it’s why he was throwing a large, 12- to 16-inch, soft plastic swimbait when the big muskie ate. He was also using 100-pound braided line and a homemade wire leader rigged up on a 9-foot, 6-inch extra-extra heavy rod made by Thorne Brothers, a local tackle shop based in Blaine, Minnesota.

“We’re out there basically every day we can in the fall,” Sprengeler says. “And that’s what everyone says in Minnesota: ‘Oh, you know, going out chasing The Queen.’ So to actually catch her is pretty crazy.”