Archery has been around for thousands of years. And during all that time, the majority of the bows that have... 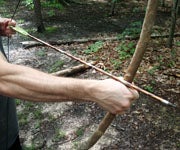 Archery has been around for thousands of years. And during all that time, the majority of the bows that have been made were simple “one stick” wooden bows. I’m sure most of us have made toy versions of wood bows as kids, but we can still have a lot of fun as grown-ups when we tie a string to the ends of a hardwood stick and send a few arrows into the bull’s eye. And besides being entertaining, if you spend some time making and shooting your own bows and arrows, these skills can greatly increase your odds of getting meat in a survival situation.

The Bow Stick
If you want to start shooting right away, the stick you choose for a bow (technically referred to as a stave) should be a hardwood stick that is dead and dry, but not rotten. Hickory, Elm, Ash, Maple, Locust and Osage Orange are just a few of the woods that Native Americans have traditionally used, and that archery enthusiasts of all lineages still shoot today.

Another trick to get you shooting right away is to craft a “long bow.” A stave from a dead branch or dead sapling that is about six-feet long will be more forgiving as it bends toward your normal draw. A shorter bow will have to bend more to reach your draw length, and this could break the improvised bow causing the limbs to fly back and injure the shooter.

During construction, most bows from a single piece of wood are tillered. Tillering is the art of thinning down the wood so that each limb of the bow bends equally, and so that the bow has the desired draw weight. If the draw is too heavy, it is tillered down to thin out the limbs and lighten the draw. For a quickie bow you could do some tillering by carving down the inside of the bow on the thicker end of the stave. In pre-metal cultures this tillering was done by painstakingly scraping with a stone scraping tool. Today we can work much faster by whittling down the wood with a knife, then scraping and/or sanding the wood. But if you want to shoot immediately, and the limbs aren’t too different in diameter, string it up.

The String
While traditional bow strings have been made from plant fiber, rawhide strips, dried intestine strips and other natural materials, in the interest of getting you shooting right now, a length of 550 cord from your survival pack will have more than enough strength and a good diameter for a quick bow string. Use any knots you like, as long as they hold. When you tie the second knot to complete the bow string, the distance from the grip to the string should be about 8 to 9 inches. When you are done shooting your bow, untie one end of the string to let the stave straighten out and “rest,” otherwise your bow will lose some spring.

You can shoot any modern arrows you like from this quick bow, or learn to make your own arrows. Many folks are a little surprised at how easy it can be to get a primitive bow functioning; and they’re equally surprised at the difficulty involved in creating a good primitive arrow. We’ll cover arrow making another time.

In the meantime, remember to shoot safely, wear the proper archery protection, and never fire primitive arrows or wooden arrows from a compound bow (they tend to explode into a cloud of splinters right in your face).