As I mentioned in our post last week on signal methods, the humble whistle is a signal device that works... 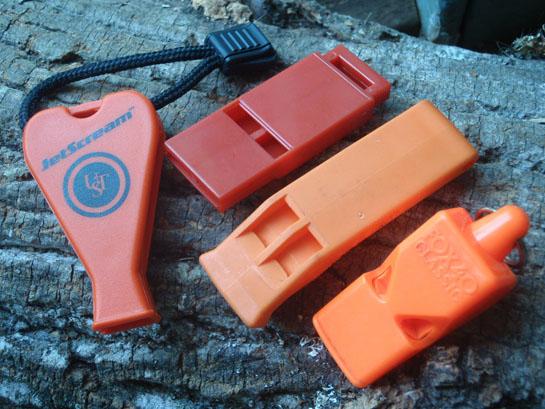 As I mentioned in our post last week on signal methods, the humble whistle is a signal device that works day or night. As long as you have the breath to blow it, the whistle can attract attention in foul weather or fair. But like most things, there is more to the use of a signal whistle than just blowing on it until you deafen yourself.

SOS
By far, the most commonly known signal for “help” is the SOS call. You can use other things beside the whistle to send an SOS (such as lights or flags), but the code is still the same: three dots, three dashes, and three more dots. The dot is a short, sharp pulse about three seconds long; a dash is a longer pulse, approximately six seconds long. When calling an SOS signal, keep repeating the signal as often as you can stand it, and for as long as you need it.

The SOS is the internationally recognized distress signal in Morse code, and over the years SOS became associated with such phrases as “save our ship”, “save our souls” and “send out succour.” But none of those are actually what it means. The odd truth is that SOS does not actually stand for anything. In fact, SOS is only one of several ways that the combination could have been written. Using the code VTB would produce exactly the same dots and dashes, but for whatever reason, SOS was chosen to describe this combination. SOS is the only 9-element signal in Morse code, making it easily recognizable, since no other symbol uses more than 8 elements.

Each whistle blast should last 3 seconds.

Has a simple whistle ever saved your bacon? Tell us about it in the comments (but please refrain using Morse code to do so).