How to Catch Bigger Bluegills This Spring

Don't bother with those dainty panfish, target the bulls 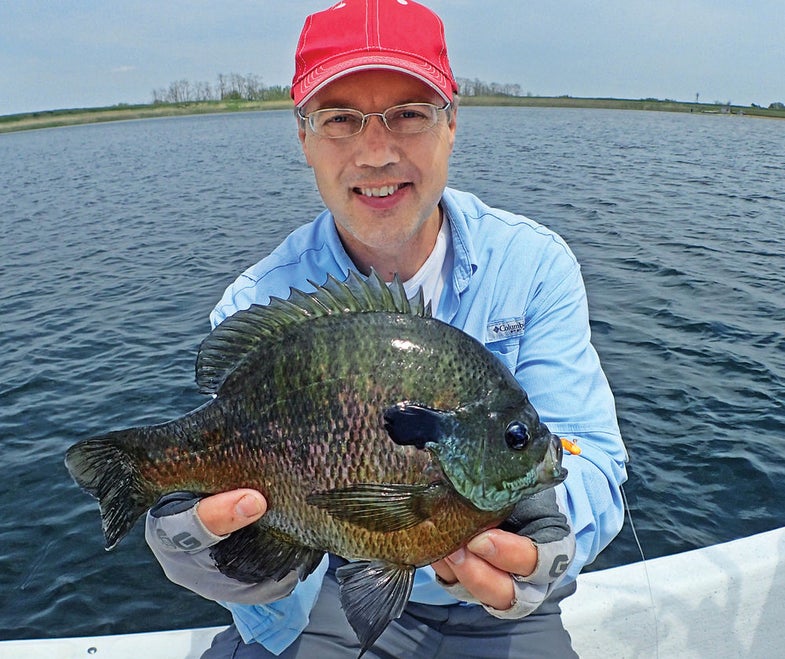 The author with a 2-pound bluegill. Steve Ryan
SHARE

Small, dink bluegills are insufferable. Giant ’gills—true bulls—are another story entirely. I can recall with perfect clarity every hump-headed, 12-plus-inch bluegill that I have ever caught. The list requires one hand to index. The last occurred on a fishery known to grow 2-pounders. The battle was tremendous. No jumps; just powerful, determined runs. My anticipated large bass morphed into “Brutus.” He measured 12.5 inches and weighed 2.1 pounds. So, how do you catch bigger bluegills this spring? Try these tactics this spring.

Upsizing your lures can increase your odds of connecting with some of the largest bluegills in any fishery. During the pre-spawn period, when large male ’gills first move onto the flats to stake out their future spawning grounds, soft-plastic swimbaits will provoke strikes from territorial bulls. Favorite lures in this category include Storm’s Suspending WildEye Swim Shad. At 3 inches, these baits are outside the experience of most panfish anglers, but they are just large enough to cause a reaction from bulls. At ¼ ounce, they cast well on light line, and their suspending nature helps keep them from snagging bottom on a slow retrieve.

The technique used with these swimbaits is simple. Locate 2- to 6-foot flats adjacent to traditional spawning sites. Fan cast the flats by making long casts toward the shoreline. Retrieve the lure just fast enough to keep it off the bottom, with an occasional twitch of the rod to vary the action of the paddletail. Big bluegills will chase down these baits from a distance. Check out our guide to the best panfish lures here.

Once bulls are in full spawning mode, they are less likely to chase horizontally moving lures and are best left alone to spawn the next generation of trophies. With the spawn completed, big ’gills vacate the flats and push off to deep outside weed edges. In these areas, you can target bulls by casting parallel to the edges with sinking lipless rattling baits, blade baits, and tailspin lures. These can be fished with a yo-yo retrieve to cover multiple depth ranges. Top-producing lures include a ¼-ounce #5 Rapala Rippin’ Rap, ¼-ounce Rat-L-Trap, ³⁄₁₆-ounce Johnson Thin Fisher, ¼-ounce Big Dude Blade Bait, and Biwaa Divinator Mini. The size, flash, and/or noise of these lures will draw large bluegills out of the weeds.

In lakes that lack weeds, the biggest ’gills in the system are often pelagic and key on rock structure. Nomadically wandering in open water, they opportunistically feed on minnows and young-of-the-year panfish that get pushed against mid-lake humps and points, as well as on bottom-dwelling crayfish and hellgrammites. At 10 inches or bigger in size, bulls have no fear. They are no longer prey for bass or walleyes. Instead, they have reversed roles and are now predators of young-of-the-year fish.

Bull bluegills are not schoolers. Instead, they travel in small pods of similarly sized fish, often accompanied by several bass. Target these bulls in the same manner you would bass—by drop-shotting. While finesse plastics can be used to occasionally fool savvy deep-water bulls, nothing outproduces a lively whole nightcrawler or leech nose-hooked with a size 8 VMC Spinshot hook. Use the lightest weight possible to maintain bottom contact, and no-stretch braided line for maximum sensitivity. Bluegills are suction feeders and can breathe in and spit out a bait in a blink of an eye.

For a more active approach in deep water, employ a spoon and bait. Top spoons for this approach are compact rattling spoons such as the Acme Rattle Master, VMC Rattle Spoon, and Clam Rattlin’ Blade Spoon. Tip them with either live bait or the more durable and heavily scented Gulp! Waxies. Work spoons by allowing them to sink to the bottom. Give them a couple of quick pops to get the spoon rocketing 3 to 4 feet off the bottom, then slow down the retrieve by hopping the spoon back to the boat about 6 to 10 inches off the bottom with each hop. Continue working the spoon until it is directly under the boat. With the spoon suspended a few inches off the bottom, shake the rod tip to get the spoon rocking back and forth. This slight rocking motion is often enough to draw a strike.

Panfish anglers often forget that they need to impart lively action to their jigs by changing up materials in order to vary their fall rates. Whether it’s marabou, rabbit, or deer hair, no particular jig material works under every condition—however, there are dramatic differences among them that astute panfish anglers can use to their advantage.

Marabou is a popular panfish jig material due to its soft undulating action in the water. Made originally from fine stork feathers and now from less exotic chicken feathers, marabou compresses with each pull of the jig and expands out on the pause. Contracting tightly on the fall, marabou has minimal water resistance to slow the jig’s descent. The resulting fast fall rate helps get your lure to the bottom quickly for deep-water bulls while avoiding smaller suspended ’gills. To slow the fall rate slightly and bulk up the appearance of jigs, add a plastic trailer like a Slab Jiggies Realistic Minnow. At times, bigger is better.

Rabbit hair jigs are coveted by top bluegill anglers who fish cold water. Rabbit hair breathes less than marabou and, therefore, maintains its shape better in the water, falls more slowly, and fishes big for its weight. Tip these jigs with a large leech or half a crawler for the ultimate slow sinking jig-and-bait combination. Top quality rabbit hair jigs include ¹⁄₃₂- or ¹⁄₁₆-ounce Mr. Derk’s Buggy jigs. While originally designed for steelhead, these high-quality jigs are deadly on trophy ’gills and crappies.

Somewhere between the fall characteristics of marabou and rabbit is deer hair—­generally referred to as bucktail. Bucktail holds its shape in water, is durable, and has a moderate fall rate. The most famous of all panfish bucktail jigs is likely the Original Pinkie jig by Little Atom. These have a darter-style head that imparts a side-to-side action to them with each twitch of the rod.

While the descent rate of jigs is important for garnering the attention of bulls, equally important is the look of fishing jigs at rest on the bottom. Trophy bluegills are like a magician’s worst heckler. They will race up to a suspended jig and then stop on a dime inches from the bait. With pectoral fins waving, they hover in place—meticulously examining every minute detail of the offering. Their unblinking eyes search for any mistakes in the presentation. However, by laying a jig on the bottom, there’s less chance that flaws will be detected—such as they might with a jig that is spinning or moving in an unnatural manner or suspended just a little too high or too low. Instead, bulls following the offering on the fall are presented with naturally breathing fibers and a wiggling live bait on the bottom, where most of their food naturally resides or originates. A vulnerable bait is often too much for them to resist.

Giant ’gills have different feeding habits and a different mentality than small ones. Once they get big enough that they don’t fit into a bass’ mouth, they begin to feed like bass. They are up earlier than small ’gills and cruise the flats looking for smaller fish that have yet to react to the changing light. Bull bluegills also feed later into the evening for the same reason. Smaller fish are susceptible to being eaten, whereas bulls are not on the menu. Topwater baits like a Storm Hopper Popper or Heddon Tiny Torpedo play to the curious nature of ’gills, and the disturbance they create on the surface will draw the bigger, most aggressive fish. By thinking of bull bluegills the same way you would about bass, you can better decipher their locations and figure out how to catch them.

How to Catch Bluegills on Memorial Day: Fish Like a Walleye Angler

Minnesota walleye pro Scott Seibert just may have found a big bluegill tactic that will outperform a nightcrawler under a bobber—crankbaits. The lightbulb recently went off in his fishy mind, when one of his trolled Rapala Shad Raps was hammered by a fat 10-inch bluegill. Other tournament participants reported similar off-target catches — including one mammoth ‘gill that went 11 inches.

While not the competitive objective, the bluegill Seibert caught offered a sporty tussle, even on walleye tackle. But for your fun fishing this weekend, he suggests lightening the gear (medium spinning tackle and 6-pound line).

Seibert says late May to early June is the perfect time to target these fish with hard baits in shallow water. Bedding in 2 to 5 feet, the fish are wound up and ready to attack.

“I believe these shallow fish are protecting their beds, and it is more of a protecting bite, rather than a feeding bite,” he says. “If you catch fish on the beds it is important to let them go.” —David A. Brown