They’re growing ‘em big down in ‘Bama these days 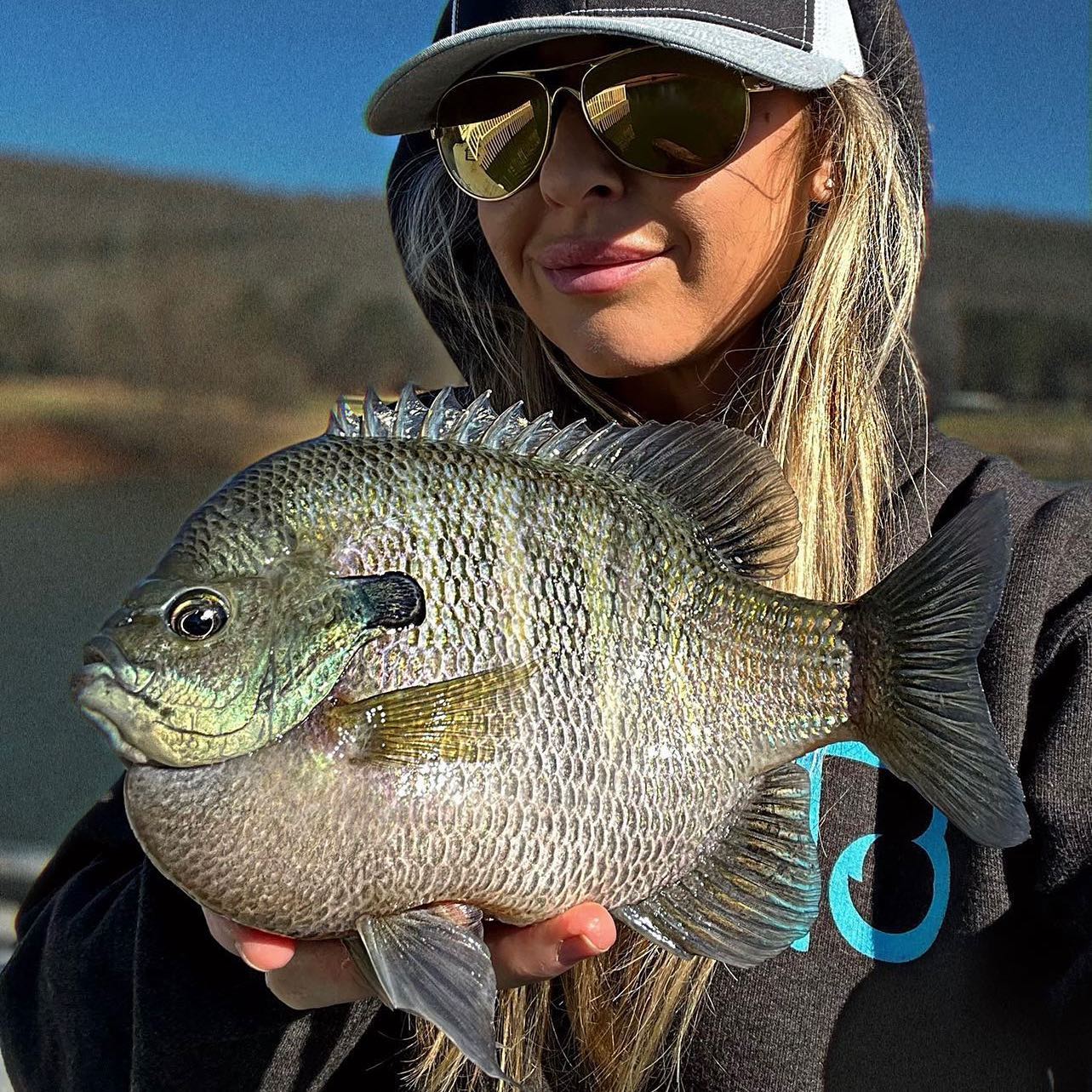 Ask Sarah Parvin why she’s on a mission to grow the world’s biggest bluegill—and then catch it—and she’ll be happy to talk your ear off. The Alabama angler and self-dubbed “Slab Queen” says that bass have long been the stars of the freshwater fishing scene in the South, and these days, it seems like everyone with a private pond is trying to grow their own double-digit bigmouth. This puts warm water species like crappie, bream, and other panfish in the “child’s play” category—perfect for kids with cane poles, but trophy fishing for bluegill? Yeah, right.

That’s why Parvin says she wants to change the narrative.

“I truly believe that panfishing has been looked at as the red-headed stepchild of freshwater fishing,” she says. “And I want to change that. I want people to be proud of catching big bluegill and crappie, and to share those catches just as proudly as they would a large bass.”

Now, to be fair, Parvin will be the first to admit that she’s spent her fair share of time chasing black bass throughout the South. Born and raised in Montgomery, she now lives further north in Huntsville, where she and her father Dr. Dennis Olive have managed a private, 5-acre lake for the past 27 years or so. Nicknamed the “Slab Lab,” it all started with a dream to grow beefy, 10-plus-pound bass. But Parvin says that dream changed a few years back, when the pond experienced a major fish kill.

“We had a total loss. Trophy bass, bream, everything,” she says. “But things like that happen even in the best managed private water. Nature happens.”

There are several reasons why fish kills occur in private lakes, but most stem from a process known as “eutrophication.” This happens when a water body becomes overly rich in nutrients—particularly nitrogen and phosphorous—due to an overabundance of plants, which suck all the oxygen from the water. Having too many fish in one lake or pumping it full of fish food (or a combination thereof) will have the same effect. Which is why managers of private water bodies are always trying to maintain the right balance: Everyone wants a pond full of fish, but if you take it too far, they’ll all go belly up.

Parvin and her father took this “total loss” in stride, however, and they decided to take the Slab Lab in a more experimental direction. To them, it represented a unique opportunity to “start from ground zero, make some course corrections,” and try to raise a healthy population of whopper bluegill.

The two reached out to American Sportfish, a fish hatchery and pond management company with locations in Alabama and Texas, and they asked about coppernose bluegill. A subspecies of the common bluegill, the fish are native to Florida and southeast Georgia, and according to American Sportfish, the coppernose “grows faster and eats pelleted feed more readily than the common bluegill.”

Feeling confident they had chosen the right species, Parvin and Olive ordered up 7,000 or so coppernose fingerlings and stocked them in the private lake. Then they started the years-long process of selectively culling, feeding, and experimenting to see if they couldn’t grow a bluegill for the record books.

Which brings up an important question that Parvin gets asked often these days: If you catch a world-record-sized fish that was grown and raised in a private lake, should it count as a world record? To this, Parvin responds that the International Game Fish Association makes the rules and sets the bar for world-record fish. And until the IGFA stops accepting entries that come from private water bodies (similar to how the Boone and Crockett Club doesn’t allow high-fenced or pen-raised deer in its record books), she’s not too concerned with other people’s approval.

“I’ll be honest,” Parvin says. “I wouldn’t give a rip if I never even got the world-record certified. It is what my dad and I have done in three-and-a-half years with these trophy coppernose that means everything to me.”

As a retired doctor, Parvin’s father has more of a scientific background than she does. “He grows the fish and I catch ‘em. And that relationship works very well,” she jokes. But she also takes her role seriously and says that consistently catching big bluegill isn’t as easy as some would have you believe.

“As much as people like to argue with me that you can throw a bread ball and catch bream,” she says, “there is some technique when you’re trophy hunting for panfish. And lure selection is something I’ve really had to dial in when I’m targeting these 3-plus-pound bluegill.”

She adds that while she experiments frequently with color, profile, and the like, she hardly ever throws a lure smaller than two inches. This helps weed out some of the smaller bluegill, which are plentiful, since these fish thrive in the warm southern climate and spawn multiple times a year.

And there’s no doubt that the fish do well down here in the Heart of Dixie. The world-record bluegill is also the state record, and it came from a small lake near Birmingham, which is roughly 100 miles south of Huntsville. That fish, caught in 1950, weighed 4 pounds, 12 ounces. And unless they’ve kept it a secret, nobody in the South has touched the record since.

As for Parvin and her father, she says they are getting closer to beating the record every year. She has landed multiple fish in the three- to three-and-a-quarter-pound range in the last 12 months alone, and according to IGFA regulations, she only has to beat the current record by two ounces to make it official. So, for now, she’ll keep fishing the lake as she always has, just waiting for the right bluegill to bite.

“We truly believe that we have a four-pounder swimming in there,” Parvin says. “We just have to catch it.”