Catch Giant Pike When the Summer Heat is On 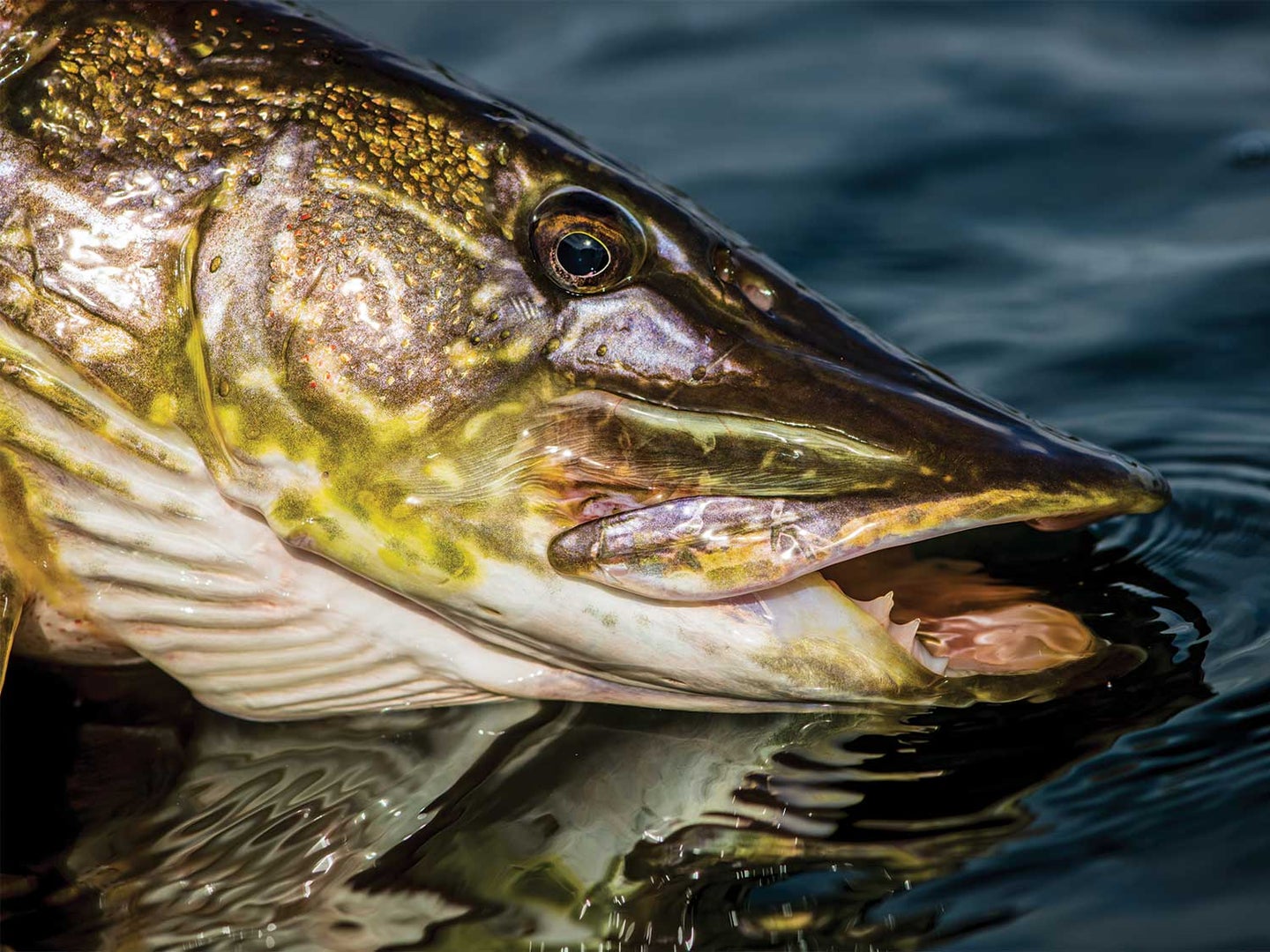 One of the best things about northern pike is that they’re willing players practically 365 days a year. Drop a shiner through the ice and it’ll get nailed. Work a spinnerbait around a rocky point in fall and it’ll get crushed. It’s the summer months that can be the most challenging for the pike hunter. Hitting loads of little “hammer handles” isn’t difficult, but those aren’t what you want. You want a giant that breaks 40 inches. In spring, it’s not uncommon for those big girls to be posted up shallow all day, but that’s not often the case in summer. To score that goliath now, you need to understand how high-caliber northerns behave in summer. Whether you want to catch it on a big, meaty fly or a sexy custom glide bait, these tips will help you take a beast in heat.

Northern pike survive and feed in a wide range of water temperatures, though they prefer 60 to 65 degrees. If you live in Canada or the northern half of the U.S., your local pike waters might maintain those temperatures throughout the summer. If that’s the case, finding big pike becomes less of the challenge. In much of their range, however, assume the heat of the summer will bring the surface temperature well above that optimal comfort zone. Little fish may still hold shallow all day, but the trophies are going to seek more pleasant temperatures, and that means they’ll go deep. In summer, a quality fish finder can be a very useful tool, not so much to mark fish, but to locate deep weed lines. Whether pike are deep or shallow, they stay with the salad. The ideal scenario is to find a weed line growing up a slope or ledge, starting in approximately 15 to 20 feet of water and continuing up to the bank. This gives larger pike a place to hang by day, lounging in the cooler water at the base of the slope, and also quick access to the shallows that host all the bluegills, shad, suckers, and smaller pike the jumbos eat.

Once a pike reaches that magical 40-inch mark, it doesn’t really behave like a pike anymore. In many regards, it’s now a muskie, and it will feed differently from the ravenous little guys. A big pike’s metabolism is slower than that of a 15- to 20-inch fish, so while you may have a favorite jerkbait, spinnerbait, or streamer for racking up numbers of pike, ask yourself: Is this the right offering to tempt that one giant? Much like a muskie, a trophy pike might eat once every few days, especially in the summer, when it’s less inclined to move around. With that in mind, it pays to ramp up lure and fly sizes. A big pike is more likely to hammer a big meal in one shot and retreat to its comfort zone than spend a feeding session trying to catch a handful of smaller forage items. Jumping lure and fly sizes also helps reduce the number of little pike you’ll catch.

Once you’ve located a good weed edge, how you approach it will vary based on time of day. Like many other species, large pike tend to move shallow in summer to feed during low-light periods early and late, so a dawn attack is always a smart idea. At first light, position your boat off the deep end of the slope. Cast lures and flies shallow and then work them off the edge. Water in the shallow weeds will be coolest in the morning, so that’s when heavy pike will be the most active. This is when a loud topwater, such as a Whopper Plopper, can draw some fierce strikes. Keep up the shallow-to-deep presentation until the sun gets high enough to light the water. At midday, reposition the boat so you can cast parallel to the edge, and switch over to lures and flies that work deep. A fly line with a heavy sink tip is critical here to get patterns down to the zone. For the conventional angler, lures such as bucktails and Bull Dawgs that can be fished at any level of the column are key. Don’t expect to catch numbers working deep, but if you get hit, there’s a strong chance it’ll be the pike you’re looking for. As the sun sets, move the boat inshore and start working deep to shallow, assuming the fading light will get the fish headed back up into skinny water for a late feed.

Regardless of size, pike can really scrap on the end of the line. During times of the year when the water is cooler, these fish recuperate from battle well, but in the summer, when the water is warm, a quick, clean release is more critical because oxygen levels are often lower then. Given that pike also have a nasty habit of inhaling lures and flies, it’s imperative that you keep the dehooking process short and sweet. These tools will help you make surgery swift, and our tips for proper pike care will bolster the likelihood of your catching that fish again, hopefully when it’s 5 pounds heavier.

Jaw Spreader: This simple tool costs about five bucks, but it’s one of the most valuable items in any pike fisherman’s kit. Northerns love to lock up those jaws after landing. You could try prying them open with pliers, or hope the fish finally opens up to let you work. Or you can prop that maw open with spreaders in one second, ensuring you don’t get bit and you get fast access to the hooks.

Long-Reach Pliers: Most of the time, your standard-length fishing pliers will get the job done, but in the event a pike takes a bait or fly way, way back, long-reach needle-nose pliers are a must. Not only can they help you quickly remove a treble in the back of a pike’s throat, but they’ll let you do so without any of your fingers ending up in the fish’s mouth. Jaw spreaders, after all, can pop free on occasion if the fish thrashes.

Rubberized Net: There are countless landing nets on the market, but serious pike fishermen usually lean on those that have a bag with a rubberized coating. These are designed to make tangling with hooks a less frequent occurrence—or no occurrence at all. They are also purported to remove less of the fish’s slime coat, which promotes a healthier release. With a rubberized net, most of the time you never even need to take a pike out of the water. Instead, you work on the fish while it’s in the bag. Granted, using jaw spreaders hinders the pike’s ability to breathe, but they should also allow you to get the hooks out faster, and a fish in the net is always better off than one lying on a hot, dry deck.

Read Next: 15 Top Lures for Pike and Muskie Fishing

With the hooks removed, let the pike chill out in the net for a few seconds, which will help you determine its strength. If the fish is still fired up and thrashing, let it go by just slipping the net away so it can kick off. If it’s mellow and appears to be catching its breath, gently grab it by the tail with one hand while supporting the belly just behind the gills with the other hand. Clear the net and slowly rock the fish forward and backward to get more water moving over its gills until it kicks away on its own.

And if you’re in deep water, point the fish’s head downward so that when it swims off, it’s oriented toward cooler water below instead of the warmer surface water.