Secrets of the world's best anglers 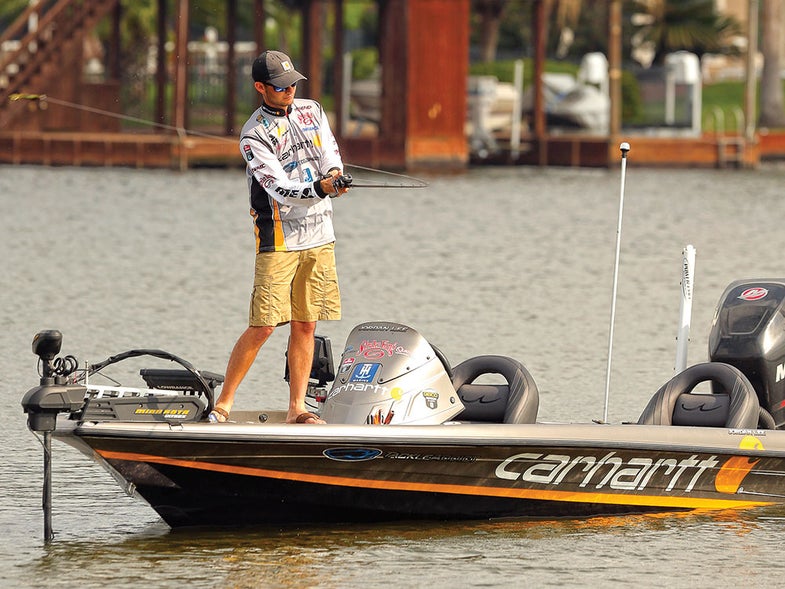 When you’re competing to become the best angler in your sport, you’ve got to have a secret or two designed to put fish in the boat when others can’t. Here’s how the reigning kings of the bass, walleye, redfish, and crappie tournaments gained their crowns.

It might come as something of a surprise to many, but anglers who consistently catch big bass don’t normally have a tackle bag full of customized lures. In fact, filling the livewell is more about the fundamentals­—particularly during those notoriously difficult summertime doldrums.

“A lot of times it’s the little things like presentation that matter the most,” says BASS champ Jordan Lee. “It’s not secret baits, but rather a long cast or a good flip.”

When the calendar page turns to June and the task is to catch giant summertime bass, the Grant, Ala., native heads offshore in search of smallmouths and largemouths that congregate on humps and points in 20 to 25 feet of water. Getting his big crankbaits down to the strike zone is where it all begins, and that takes specific gear, including rods, line, reels, and, lastly, the crankbaits themselves. Longer rods are critical for casting distance, which in turn impacts the dive rate of the crankbaits. He slings them with a 7-foot 11-inch long, medium-heavy rod.

“First, I’ve got to make long casts to get the bait to the proper depth,” the 26-year-old says. “Then, I try to visualize my bait diving and coming through the fish.”

The average cast with a 7-foot rod is about 45 yards. Adding another foot of length to the rod can extend casting distances to 55 or 60 yards. Although every crankbait dives at a different angle, a good rule of thumb is to overshoot the target so that the bait will intersect the fish somewhere near the midpoint of the retrieve. In addition to longer rods, Lee recommends light line. His go-to choice is 12-pound-test fluorocarbon. Lighter line adds a bit more depth to the retrieve, which he enhances further by pointing the rod tip toward the water.

Once the lure is in the zone, the goal is to elicit a reaction strike from the bass, and that means digging for and maintaining contact with the bottom. That’s best achieved with an aggressive, straight retrieve.

“Reel as fast as you can,” says Lee. “When you run the crankbait right past the fish, they just react to it.” Lee prefers a reel with a 5.3:1 gear ratio.

The choice of which deep-diving crankbait to use is the final piece of the puzzle.

“What matters most is that you choose a crankbait that matches the depth you are fishing,” he says. “If you can’t get one particular bait to the bottom, then find one that dives deeper.”

In summertime conditions, he’ll typically use a Strike King Pro Model 6XD or 10XD bait in citrus-shad or chartreuse-shad for stained water, and green gizzard shad for clear water. When bass jump on the crankbait, Lee sweeps his rod to the side to set the hook.

“Fundamentals begin with equipment. Get one piece wrong and your presentation will be off.”

“Day in and day out, one of the easiest-to-use and most consistent walleye rigs in my arsenal is what we call ‘slow death,’ ” says Jason Przekurat. “It combines a bottom bouncer with 4-foot leader and a slow-turn hook—and it produces.”

The slow-death rig catches fish best when the bait is precisely positioned 1 to 3 feet off the bottom, Przekurat says. The bait should hover rather than bounce. In cleaner water you can let the bait rise, and in stained water you will want to stay within 1 foot of the lake bed.

“Ideally, you want to have your line angle at 45 degrees. Then you know you are using the right bottom-bouncer weight,” says the Stevens Point, Wis., native.

If your line is too vertical, you will miss some of the bites and limit your ability to set the hook. If you have too much line out, it will be tougher to feel the bottom, which is crucial to maintaining the right hover point. Przekurat maintains constant contact with the bottom by checking his depth every 10 seconds—dropping his rod tip toward the water until the rig touches down, then returning it to the hover point. Troll the rig at .6 to 1.0 miles per hour, but do not put rods into their holders. Adjust trolling speed if a front moves through.

“What I have seen is the day after a front is tough, and the second day is even worse,” he says. “You really need to slow down.”

Points, rocks, weeds, and any other structure are all excellent targets. The key is to maintain good boat control. If you allow the wind to push you from water that’s 20 feet deep into the shallows, it will be difficult to keep your rig hovering just off the bottom.

“Fish will grab the bait, let go, and grab it again,” he says. “When you do get a bite, feed the rod back to the fish as they take it and let the rod load up. Then sweep forward to set the hook.”

Captain Mark Robinson is a bit of an anomaly among redfishermen. Instead of eagerly anticipating the opportunity to sight-cast for fish, he prefers to go blind.

“I try to get away from pressured fish,” he says. “I’ll back off, stay away from the crowds, move out to deeper water, and blind-cast.”

Although he might not be able to see tailing reds, Robinson is adept at reading the water and understanding what is going on beneath the surface. He begins by scanning flats from a distance in search of diving terns, popping shrimp, and baitfish. As he gets closer, he searches for ripples, mud boils, and wakes. Flats devoid of these signs probably will not hold many reds. Once he has located a flat with signs of life, he will make as many casts as he can, covering as much water as possible.

“The whole time I am fan-casting until I see something that catches my eye,” says Robinson. “Even if I spook reds, I’m certain that they will go back to doing what they were doing and I can catch them 20 minutes later.”

His go-to bait is a Berkley black-chartreuse ripple mullet that he threads on a ¼-ounce Knotty Hooker jighead. He makes long casts—up to 70 yards—and simply reels.

On stormy, windy, and rainy days, pack something with more vibration. Robinson suggests clipping a spinner to your jighead or tying on a larger paddle tail. If it’s clear and calm, reverse course and downsize. Try a Down South Lures, Chicken of the “C” for a little more finesse. In either case, timing is everything.

“I’ll watch my fishing app closely. If it says that the feeding time is at 2 o’clock, I make sure that I am there,” he says. “The mistake a lot of people make is they catch fish at two, then go back the next day in the morning and don’t catch fish. They think they’re gone, but those fish just aren’t biting yet.”

“Whether you are fishing recreationally or in a tournament, there’s no more effective way to put crappies in the boat than spider-rigging,” says Matt Morgan. “It allows you to precisely control the depth and speed of your bait, while also allowing you to cover a vast amount of water.”

“When you are spider-rigging, the most important factor that separates good fishermen from the best is boat control,” says Morgan. “And moving into the wind often allows you to present your bait at precisely the right speed and depth.”

At the heart of Morgan’s spider-rigging spread are his rods—up to 16 of them secured in rod holders and set to fish precise depths. Center rods are fished deeper than the rods to the left and right when he is fishing cover. The rods in the center are used to literally bump the cover. Morgan recommends a boat speed of .3 to .6 miles per hour in order to fish as vertically as possible. If his line is drifting under the bow, he knows that he is moving too fast.

When Morgan is open-water trolling, he reverses this approach and sets his outer rods deeper. Center rods should be 1 to 3 feet shallower to limit trolling drag and keep the baits as far away from the motor as possible.

In muddy water, which is most common during the spring, Morgan will tie on a Roadrunner jig tipped with a minnow. He also likes to use Rockport Rattlers tipped with minnows. He will fish both with a single baited hook above them on his double rig. He fine-tunes his Roadrunner with Glo plastics.

Morgan brings along about 5 pounds of minnows each day to keep his double rigs freshly baited. He changes baits almost every 30 seconds, which means none of his rods have the same bait on them for more than 5 minutes. Morgan doesn’t know if it’s the fresh scent or the liveliness of the minnow that makes a difference, but he knows fresh minnows catch crappies.