Here's how to catch big reds in the late fall and winter by surf-fishing from a flats boat. 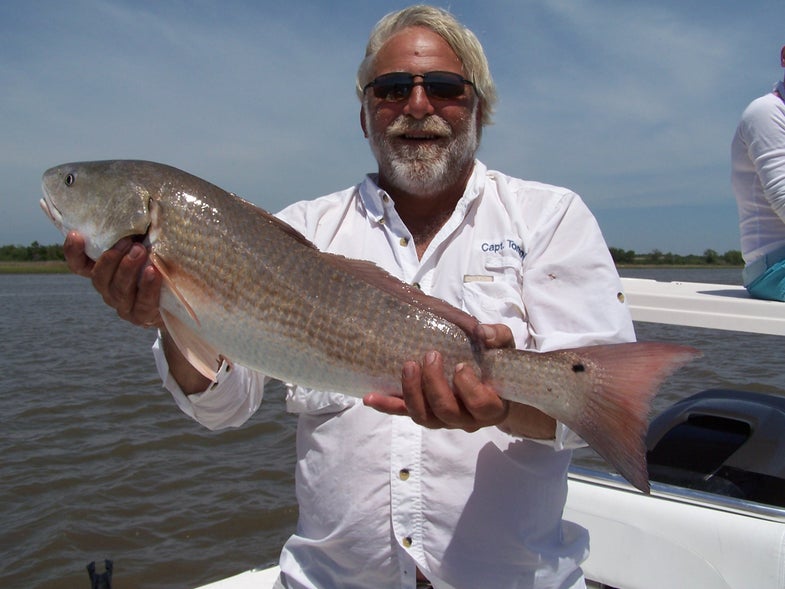 I wrestled my first red drum clear of the waters of Masonboro Sound. Sunlight glinted from its flanks as shiny as a newly minted copper penny. The redfish’s blue-edged fins and tail glowed like neon lamps and the spot on its tail was black as midnight. It was love at first fight.

That initial encounter 27 years ago preceded the redfish craze that created a dearth of drum along the Atlantic and Gulf coasts. Redfish were once so difficult to catch that Southern anglers spent more time hunting fish than catching them. Now that situation is reversed. Thanks to better management, redfish numbers are finally back in the black. Anglers hook so many reds that the guarantee of good fishing could blunt their anticipation, except for one thing: The fish have grown in size as well as numbers.

Capture Charters’ Captain Fisher Culbreth, a North Carolina guide and world surfing champion, fishes for drum in a very unorthodox manner. He chases big reds in the late fall and winter by surf-fishing from a flats boat.

“The colder it gets, the more reds are pushed out to the beach from the marshes,” Culbreth says. “I’ll roll over the waves, following a school as they work the beach. By Christmas, there are so many fish in the schools the water looks purple.” In the winter, chances are you’ll be the only gig in town, casting bucktail jigs to 200 fish. With no other boats to spook the fish, Culbreth will let his boat drift right through a school. His only concern is keeping an eye on incoming waves.

Culbreth’s exotic tactic is a new twist in the old sport of surf-fishing. Surf-fishermen wade into the suds, casting mullet steaks and menhaden fillets to a slough running parallel to the beach. By being in a boat just beyond the breakers, though, Culbreth is able to track the movement of schools instead of waiting for a fish to swim by. With that advantage you can increase the fishing excitement by casting to drum with tackle normally used for largemouth bass, such as crankbaits, white jigs and spoons. But when bulls over 40 inches move onto the beach or the winter wind whips up waves, heavy rods with pyramid sinkers and sliced mullet will give you better leverage.

When the conditions aren’t right in the ocean, move to the backwaters. Sight-casting in sounds, rivers and bays can be exciting or maddening, depending on the water temperature. Fishing is usually excellent around Thanksgiving, though. When the water temperature dips below 50 degrees, juvenile reds weighing up to 10 pounds hover in shallow water in large schools. The best tactic for these suspended fish is slow-rolling spinnerbaits or casting small jigs at the edges of schools. The only time the fish feed is likely to be during the middle of the day when sunlight warms the bottom.

On days when the water does warm up, schooling redfish pig out, rooting crustaceans from the edges of grass beds. Flyfishermen can score by casting a spoon fly ahead of boils or tailing fish and into muddied water. Leave it on the bottom until the fish is within 4 feet before twitching it upward to draw the strike.

Weedless spoons with rind trailers are standby lures for grass. In-line spinnerbaits with weedless hooks are more effective for winter fish because they have greater action on slow retrieves.

Culbreth would prefer to be in the ocean chasing reds, but when conditions are wrong he has some inshore tricks in his tackle box. “Find the freshest shrimp you can,” Culbreth says. “Thread the shrimp, head first, onto a trout jig and suspend it beneath a cork. Let the wind or current sweep it across a rocky point or oyster bed. Redfish won’t turn down shrimp. The jig prevents juvenile fish from swallowing the bait so you can release them unharmed. Also, the shrimp covers the hook, making the jig snag-free until the strike.”