The two men left on a fishing trip on March 11 and never returned. Authorities are still investigating what may be a weather-related boating accident 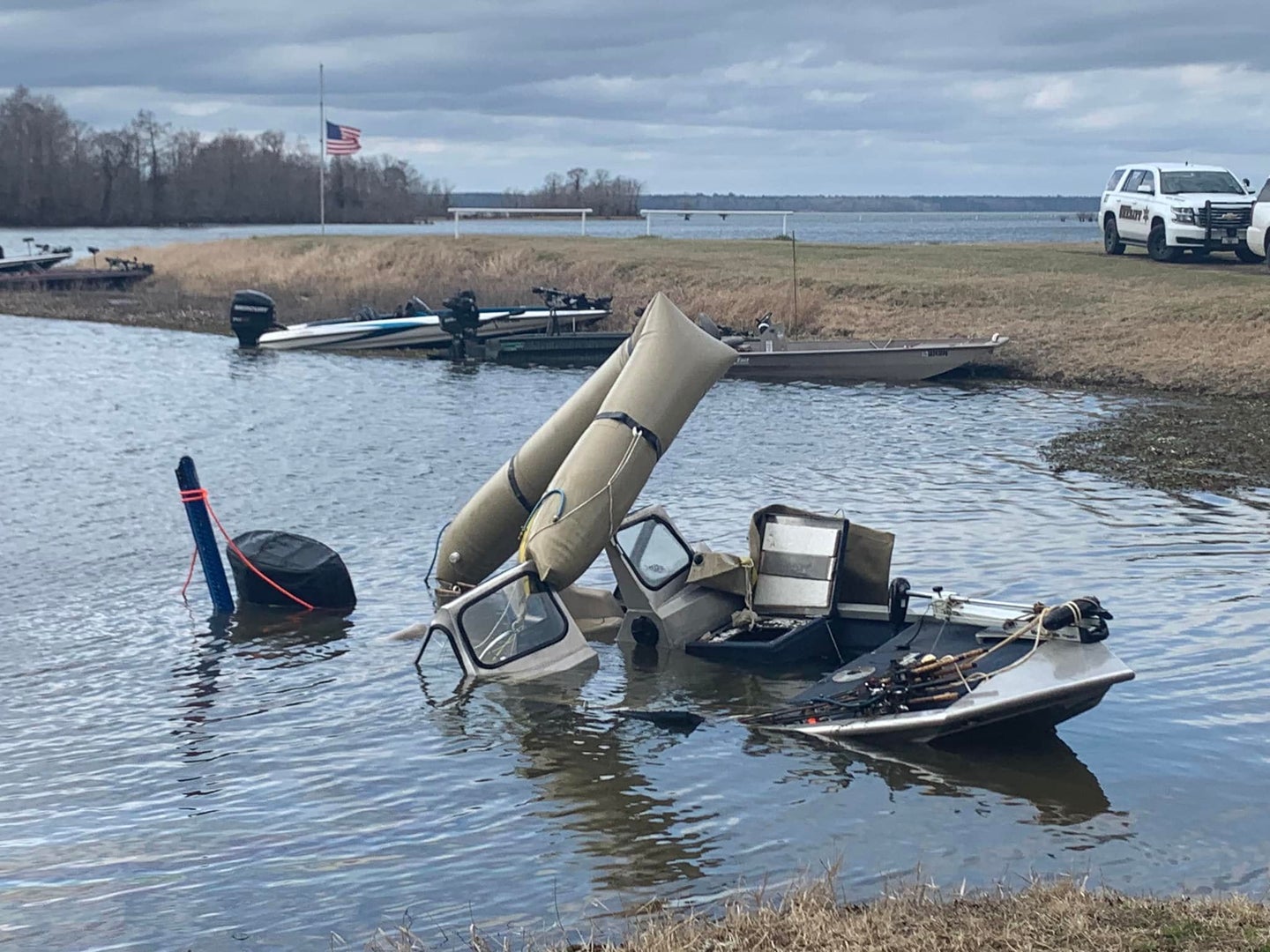 Divers with the Toledo Bend Search and Rescue Recovery Team were able to recover the sunken boat and tow it back to Solan's Camp. Sabine Parish Sheriff's Office
SHARE

Two fishing buddies left Solan’s Camp in a boat on Toledo Bend Reservoir on Friday, and never returned. Deputies with the Sabine Parish Sheriff’s Office recovered the body of the first man, identified as 61-year-old George Diboll of Oakdale, around 8 p.m. Saturday. Authorities recovered the body of the second man, identified as 61-year-old Marvin Parsons of Lafayette, yesterday afternoon.

Sheriff Aaron Mitchell announced the identification and recovery of both bodies in a March 14 Facebook post. Mitchell says the Louisiana Department of Wildlife and Fisheries is investigating the incident, and that “autopsies will be conducted on Diboll and Parsons to determine their exact causes of death.”

According to Mitchell, the two fishermen were reported missing at approximately 3:30 p.m. on Saturday, March 12. Friends say the two men launched their 18-foot boat from the ramp at Solan’s Camp around 10 a.m. on Friday, but never made it back to the ramp. LDWF agents believe that bad weather could have been a major factor in the fatal boating incident. Weather history of the area shows the conditions changed mid-day on Friday as a cold front pushed through, bringing 30 mph winds along with it. Toledo Bend Reservoir, located on the border of Texas and Louisiana, is the largest man-made body of water in the South. Local anglers and boaters often talk about the dangers of “wind on the Bend”, as the huge, 185,000-acre reservoir is notorious for choppy and dangerous conditions when the wind kicks up.

Deputies with the local Sheriff’s Office began searching for the missing fishermen Saturday afternoon. The search began at the Solan’s boat ramp, which is located on the Louisiana side on the lake near the community of Ebarb. Deputies found Diboll’s body around 8 p.m. that evening, near the shore just south of Solan’s Camp. LDWF reports that his “body was recovered with an improperly worn or fitted personal flotation device.”

The search for Parsons continued through the weekend, and a UH-60 Black Hawk helicopter from Fort Polk joined the efforts, as did the United Cajun Navy. Late in the day on Sunday, a volunteer with the Cajun Navy located and marked the submerged 18-foot aluminum vessel using the sonar and chart plotter on his boat. The boat had sunk in approximately 17 feet of water and was lying on the bottom of the lake.

The Desoto Parish Fire District 1 Toledo Bend Search and Recovery Team arrived Monday morning. TBSR divers were able to recover the sunken boat by attaching large air bags and floating it to the surface, then towing it back to Solan’s Camp.

Parsons’ body was discovered later that day, around 3:30 p.m. and near Holly Park Marina, which is miles away from Solan’s Camp on the Texas side of the lake.

Sheriff Mitchell’s Facebook announcement, posted late in the day yesterday, received an outpouring of love and support from people who knew the two men. LDWF is still investigating the incident, so it remains unclear how the boat sank in the first place. According to KPVI-6 News, this was the second fatal boating incident to occur on Toledo Bend in less than a week. Alfred D. Jackson, 52, of Lake Charles and a fellow fisherman were caught in high winds on March 5 and their boat sank. Jackson died, while the other man was rescued and taken to the hospital where he was treated for severe hypothermia.