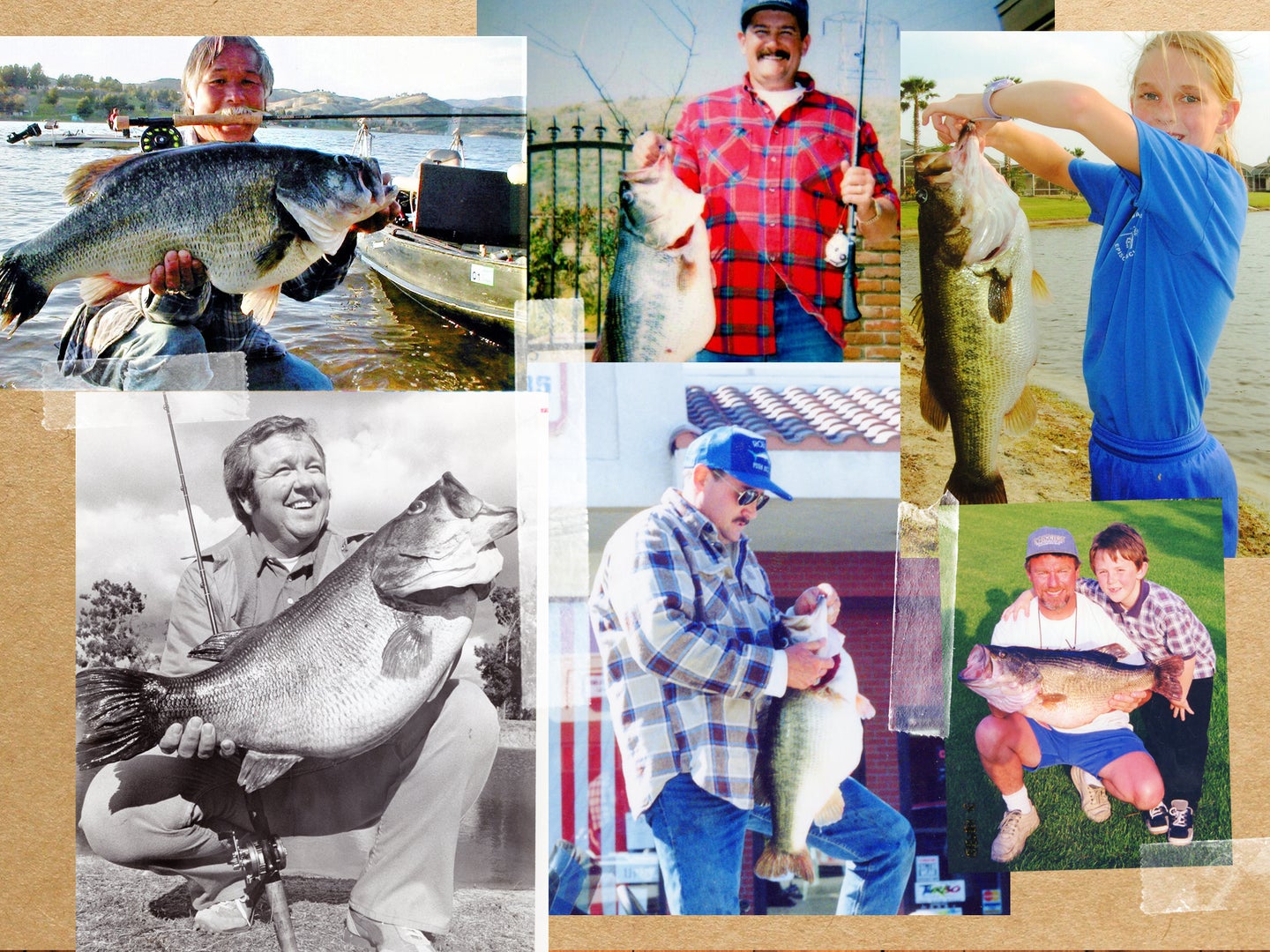 Record bass through the years. Courtesy of IGFA

The Biggest Largemouths in History

WHEN A 36-YEAR-OLD Alabama insurance agent named Ray Scott acted on his big idea to elevate a particular fish to superstar status in 1967, he set in motion a fervor that remains today. Bass is the species that launched an industry.

Scott’s concept for national, big-money bass tournaments bloomed into the Bass Anglers Sportsman Society, or B.A.S.S, an organization that grew to more than 600,000 members under his leadership. During the nearly two decades that Scott ran high-profile tournaments and seminars around the country, a multi-billion-dollar American industry emerged, centered on the incredible allure of landing big bucketmouths.

While smallies have diehard fans, the largemouth is still considered the most popular freshwater game fish in America. It’s not tough to see why. Largemouth bass are aggressive, explode on baits and fight hard, readily launching skyward from cover with aerobatic power and style.

Anyone can luck into a big bass, but technique and knowledge count when it comes to consistency. Understanding the water, the fish’s behavior, its life cycles, and more idiosyncrasies are key to coaxing lunkers to bite. Largemouth bass are smart. It has been proven that they learn to avoid lures that fooled them before, hence the need for innovation and angler versatility to trick fish, especially in pressured waters. For instance, many people think of Florida when they imagine big largemouth bass, but California reigns king in the record books. Crawfish and Castaic Lake seemed to go well together in the late 1980s and early ’90s. But instead of landing on the perfect lure and location combination, that well-publicized dynamic duo hasn’t produced another record largemouth since.

Another thing becomes glaringly apparent as you study the records is that people must not be entering their fish for consideration in the books. Just look at the biggest 11 largemouth bass in the International Gamefish Association record books. Many record classifications are vacant, including three in the fly-fishing categories and the women’s 20-pound line-class record for conventional tackle. (It’s hard to believe no woman has caught a 10-plus-pound largemouth on a reel spooled with 20-pound line.)

Zack Bellapigna, IGFA’s angler recognition coordinator, explains that the agency made a change a decade ago, and now requires any bass considered for a record to weigh at least one-half the weight of the line class.

“We had several small fish occupying record places for heavy line class,” Bellapigna says. “This, then, retired several of the current line-class records at the time including the 20-pound line-class record for largemouth. To set that record, an angler would need to land a 10-pound largemouth or greater on 20-pound-test line.”

Some of the fish currently listed as records, especially in the women’s line-class categories, are lightweights by largemouth standards, seemingly begging for an angler to look at the existing records, spool up the appropriate line, and hit the water.*

Two anglers are tied for the IGFA’s All Tackle Record, each with a 22-pound, 4-ounce fish. The more recent—and verifiable—is Manabu Kurita (above), who caught his bass in Japan’s Lake Biwa on July 2, 2009. Kurita was fishing with a live bluegill using a Deps Sidewinder rod with a Shimano Antares baitcasting reel spooled with 25-pound line. His bass measured 27.20 inches long with a 27-inch girth.

George W. Perry caught his fish on June 2, 1932, in Georgia’s Montgomery Lake. No details are recorded about his bass in the IGFA records, though there are plenty of stories out there about it.

Robert Crupi holds the record in the 16-pound class with his 22-pound largemouth caught March 12, 1991, in California’s Castaic Lake. The fish taped out at 27.75 inches long and had a 28-inch girth. Crupi was wielding a Shimano Beastmaster rod and reel combo. The line spooled was 10-pound Trilene XT. The big fish ate a crawfish that Crupi was casting.

Raymond Easley nails down the 8-pound line-class record with this big 21-pound, 3-ounce fish caught March 4, 1980, in Oakview, California. This lunker also measured 27.75 inches long with a slightly smaller 26-inch girth. Easley was fishing with a Fenwick rod matched with an ABU Ambassadeur 5500 C reel spooled with 8-pound Stren line. He, too, was casting a crawfish (or crayfish, if you prefer).

Robert Crupi again makes the record books on this fish he caught on March 9, 1990, in Castaic Lake, California, almost a year before setting the 16-pound line-class record. This 21-pounder measured 27 inches long and had a 28-inch girth. Crupi’s tools for catching this fish included a Shimano Graphite rod, a Shimano Bantam 100 reel, and 12-pound Trilene XL line. He was casting—you guessed it—a crawfish.

Dan Kadota is the 20-pound line-class record holder with a 19-pound bass caught January 8, 1989, in California’s Castaic Lake. Kadota’s bass measured 27 inches long and had a 27-inch girth. He was using a Berkley Bionix rod matched with a Daiwa PMF 1000 reel spooled with 14-pound Trilene XT line. The bait—in case you were wondering—yup, a crawfish.

Robert Crupi and Castaic Lake show up again, this time for a 17-pound, 1-ounce record fish caught December 28, 1990, on just 4-pound line. This bass was 24.75 inches long with a 26-inch girth. Crupi’s gear of choice was a Shimano Speedmaster rod and a Shimano 1000 SM reel. His line was 2-pound Trilene XT. Here’s where things finally take a twist: He was jigging a crippled herring lure.

Cody Pierce has an enduring male junior record with his 17-pound bass caught March 22, 2000, in San Diego’s Murray Reservoir. Pierce’s bass was 28 inches long; the girth wasn’t recorded. He was fishing with a Shimano Catana rod, Shimano Bantam Crestfire reel, and 10-pound Berkley Trilene. He was casting a soft-plastic worm when the big fish bit.

Larry Kurosaki has the distinction of having the record book’s biggest fly-fishing lunker with a 16-pound, 12-ounce bass he caught on relatively lightweight tackle. Kurosaki’s fish measured 24.50 inches with a 24-inch girth. He caught it on Feb. 26, 2009, in Castaic Lagoon in Castaic, California. He was using a G. Loomis rod with a Bauer MZ3 reel. The line was 6-pound Maxima. He was pitching a Larry Minnow.

Terry McAbee is the record holder in the 6-pound line class with a hefty 16-pound, 9-ounce largemouth caught March 18, 1998, in California’s Lake Isabella. This fish was 26 inches long and had a 23-inch girth. McAbee was fishing with a G. Loomis rod paired with a Daiwa Regal 2 Zoot reel spooled with 6-pound Trilene line. The records indicate he was fly fishing and casting a 6-inch R&R Stroker Worm 6. The record, however, is listed in the conventional tackle line class listings.

Mackenzie Ruth Hickox is the reigning record holder in the Female Junior Category with a 15-pound, 12-ounce largemouth she caught May 8, 2006, while fishing in Spruce Creek near Daytona Beach, Florida. Her bass was 26.75 inches long with a 22-inch girth. She was using a Shakespeare rod and reel combo. The line brand or size is not specified in the record books, but the records did note that she was casting a strobe spinner.

*Note that the line size listed in the entries might not match the line size associated with the record. The IGFA sends away line samples associated with potential records for testing at their “wet break” strength. For example, line that’s labeled as 2-pound might not break until more than 3 pounds of pressure is applied. That would make the catch ineligible for the 2-pound line-class record but might allow for it to claim the 4-pound record.