The Diamond Infinite Edge Pro comes ready to hunt, fits nearly everyone, and costs under $400 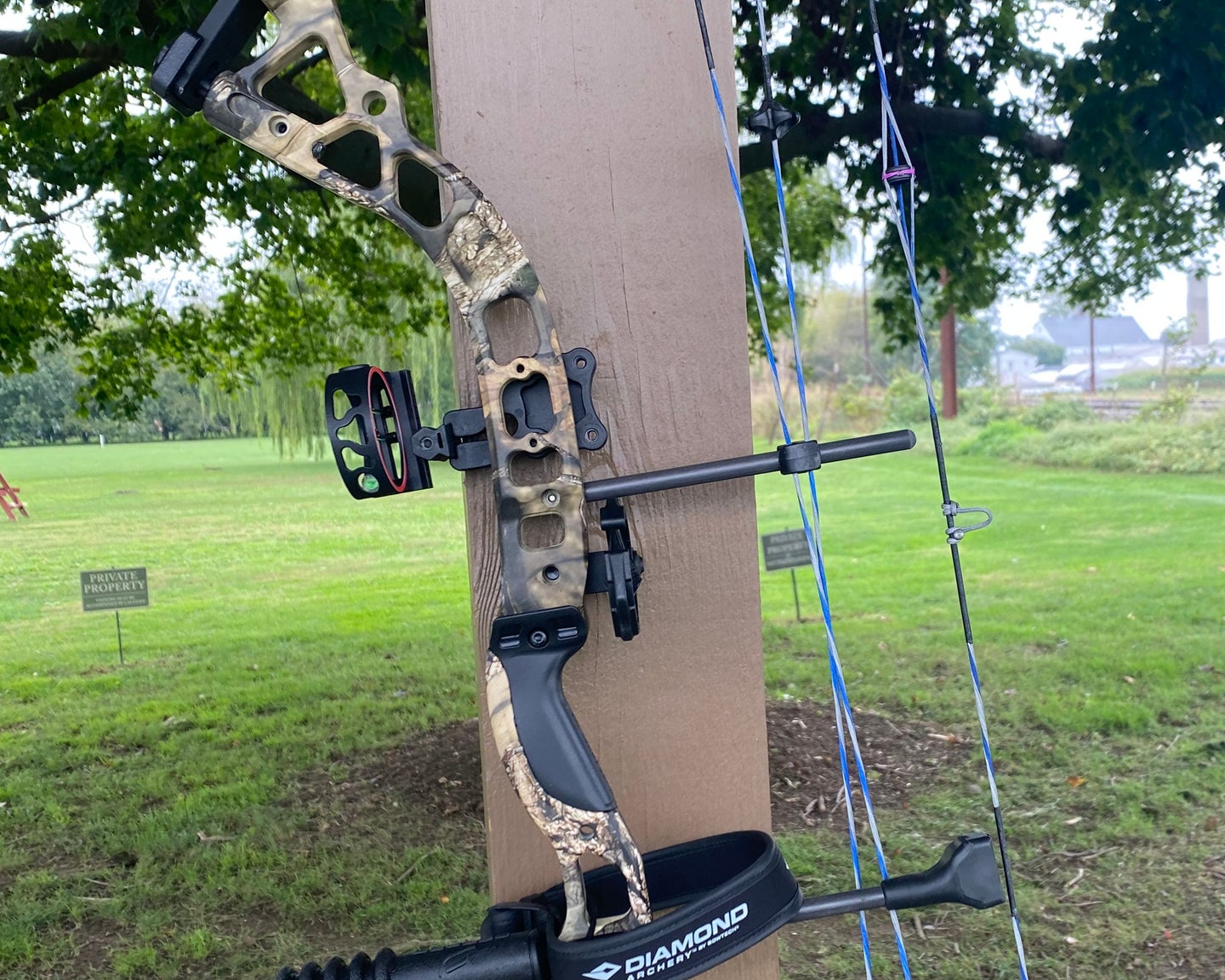 Let’s be right up front about why you’d choose to buy the Diamond Infinite Edge Pro compound bow with the R.A.K. (Ready. Aim. Kill.) System:

Those are the sweet spots for the Diamond Archery Infinite Edge Pro. Its draw length can be adjusted from 13 to 31 inches. Its draw weight goes from 5 to 70 pounds. It comes in the box with the R.A.K. system that consists of a biscuit-style arrow rest, three-pin sight, stabilizer, wrist sling, peep sight, and bow-mounted quiver. The whole package sells for under $400. And I’m here to tell you this bow can shoot. It’s not a gimmick bow that you’ll never hit anything with. You can feel confident taking this hunting bow into the woods.

The Diamond Infinite Edge Pro measures 31 inches axle-axle. This compact bow is great for kids, and works well for most adults.

The brace height is 7 inches, which is forgiving, but also promotes decent arrow speed. It has 80-percent let off—ideal for bowhunting. It has an IBO speed rating of 310 feet per second, but I’m going to be honest: don’t pay any attention to the speed rating with this bow. You’re not buying this bow for its arrow speed. We’ll talk about that in just a second.

The specs match flagship bows that cost more than twice the amount of the Diamond Infinite Edge Pro—except for the adjustment ranges. You won’t find those ranges on any high end bows, mainly because when the bow can adjust that much, the performance will suffer at any setting other than the top setting—longest draw length and highest draw weight. That’s why I mentioned the speed rating for this bow is irrelevant.

But again, we’re not looking for peak performance with this bow. We want it for the cost. If you’re an adult who wants to dip a toe into the game without spending much money—but you want a bow that you can be accurate and confident with in the woods—you don’t need 310 fps to be accurate, deadly, or confident.

This bow is also adjustable, so it can be shot by multiple people or grow with a growing archer. This bow is built to handle the draw length and weight changes needed as a kid ages from 10 to 18. The adjustability also helps in resale or handing down the bow to the next generation of bowhunters.

A key element of my test was to take the Diamond Infinite Edge from the box and set it up to shoot only with the included R.A.K. equipment. I wanted to see how the bow performed with the stock accessories. I expect I could increase its performance with a lot of expensive accessories, but that’s not what this test was about.

The brand-new bow I borrowed from Lancaster Archery Supply came in the box with the wrist sling, sight, and arrow rest installed. The rest, however, was loose and not centered. Included separately in the box were the quiver, stabilizer, and peep sight.

I must note here that I have worked in a bow shop for several years, so the bow setup process is neither foreign nor intimidating to me. But I know what’s easy, and what isn’t.

Straight out, I will say that I could not make the initial draw length adjustment without a bow press. The modules were set at around 26 or 27 inches and I needed to get to 29.5. One screw in each module was hidden behind a limb tip on both the top and bottom cams. The only way to access those screws was to press the bow, take the bowstring out of the cams, and then spin the cams until the screws were in the clear.

Thinking of the do-it-yourselfer at home, that was discouraging. Yes, there are ways to circumvent the need for a press in this situation, but I don’t like any of them because bad things can happen when you don’t use the proper tools. Ditto for installing the peep sight. I had to put the bow in the press to get slack in the string to insert the peep. Lastly, I needed the bow press to get the timing on the cams synchronized. This process ensures that the cams roll identically to one another. If one reaches full draw before the other, the cams are considered to be out of time and accuracy issues can follow.

To check the timing on the Diamond Infinite Edge Pro cams, I used a draw board attached to the bow press to draw the string and watch when the stops hit. On my bow, the top cam hit slightly before the bottom. So I had to press the bow and put one-and-a-half twists in the cable attached to the top cam to synchronize the cams. But again, I needed a bow press, which most novice bowhunters are not going to have. A quick trip to your local archery pro shop can resolve all these issues—assuming there’s one near you.

Bow-press issues aside, the rest of the bow was easy to set up. To center the rest, I nocked an arrow and held up the bow perpendicular in front of me to see how the nocking point related to the arrow rest. I had to lower the rest in order to get the arrow to sit level. The holes in the rest where it bolts to the riser are slotted to allow for such vertical moves. Easy fix.

The last step in the tuning process was to paper tune. I took a shot through a paper tuner at a distance of about 6 feet and saw a slight “nock-right” tear. The nock end of my arrow tore through the paper to the right of the point end. So I moved the rest to the left, shot again and got a perfect bullet hole, indicating my arrows would come off the bow straight.

With the cams timed and the bow tuned, I started shooting at targets from 20 yards away to sight in. The sight that comes with the bow has three pins, which can be moved up and down individually. They sit in a scope that can be adjusted up and down and horizontally. Shooting into targets, I moved my top pin according to the arrow. When my arrow hit to the right of my aiming point, I moved the scope to the right. When it hit high, I moved the pin up. It took about six shots to get my top sight pin set perfectly for 20 yards.

How the Bow Performed

So now the real test came. I knew the bow was sighted in and tuned, but would it perform? It took me about nine shots to get comfortable with how the bow performed and reacted.

The draw cycle was smooth. I had no issues drawing the string back 29.5 inches at 65 pounds. The 80-percent let off was comfortable at the back wall, which came at the end of a nice valley. In other words, the cam didn’t pull my shoulder forward at full draw. It stayed in place.

The stubby stabilizer that comes with the bow is not what I’m used to, in that it’s very light and very short. So it took a couple shots to get comfortable with the balance and the light hand shock when the string was released. Once I felt good with the bow, I started aiming hard at a standard, 40 cm face that’s used for indoor competitions at 20 yards.

I think it was on my second end of three arrows that I put them all in the gold ring—two 10s and a 9. That’s a solid end. That will kill a deer all day every day, provided you’re aiming in the right spot. All that with no fancy accessories. And this whole process from box to three-in-the-gold took about an hour. I’d have no qualms about using this as a hunting bow.

Where the Bow is Lacking

The accessories that come with this bow are low end. The center hole in the biscuit rest was lopsided. That didn’t seem to affect performance too much shooting at 20 yards, but it certainly didn’t look great and I suspect it would cause problems the farther I tried to shoot.

The sight is functional in providing aiming points. But the amount of fiber-optic material in each pin was short, so it didn’t gather much light. In other words, the pins were dark. The stabilizer is basically a 5-inch piece of rubber. I’m sure it kills some vibration, but it does almost nothing for helping keep the bow still or balanced. And as I already stated, you need a bow press to set up this bow.

What the Diamond Infinite Edge Does Best

The best attribute of the Diamond Infinite Edge is the value it provides. It comes with everything you need to shoot—sight, rest, peep, quiver, sling, and stabilizer. It can fit nearly any archer out there. It is capable of precision shooting, does what you need a compound bow to do, and it costs under 400 bucks. All those attributes make it one of the best beginner compound bows available.

In a world where most of the love in bowhunting goes to the high-end, flagship compounds, there is a place for the Diamond Infinite Edge Pro. If archery and bowhunting are to continue their unprecedented growth from the last two years, there’s a big place for bows like this. New archers will love it. Parents looking to outfit a growing kid will love it. Veteran bowhunters who want a rig that will do the job without breaking the bank will love it.