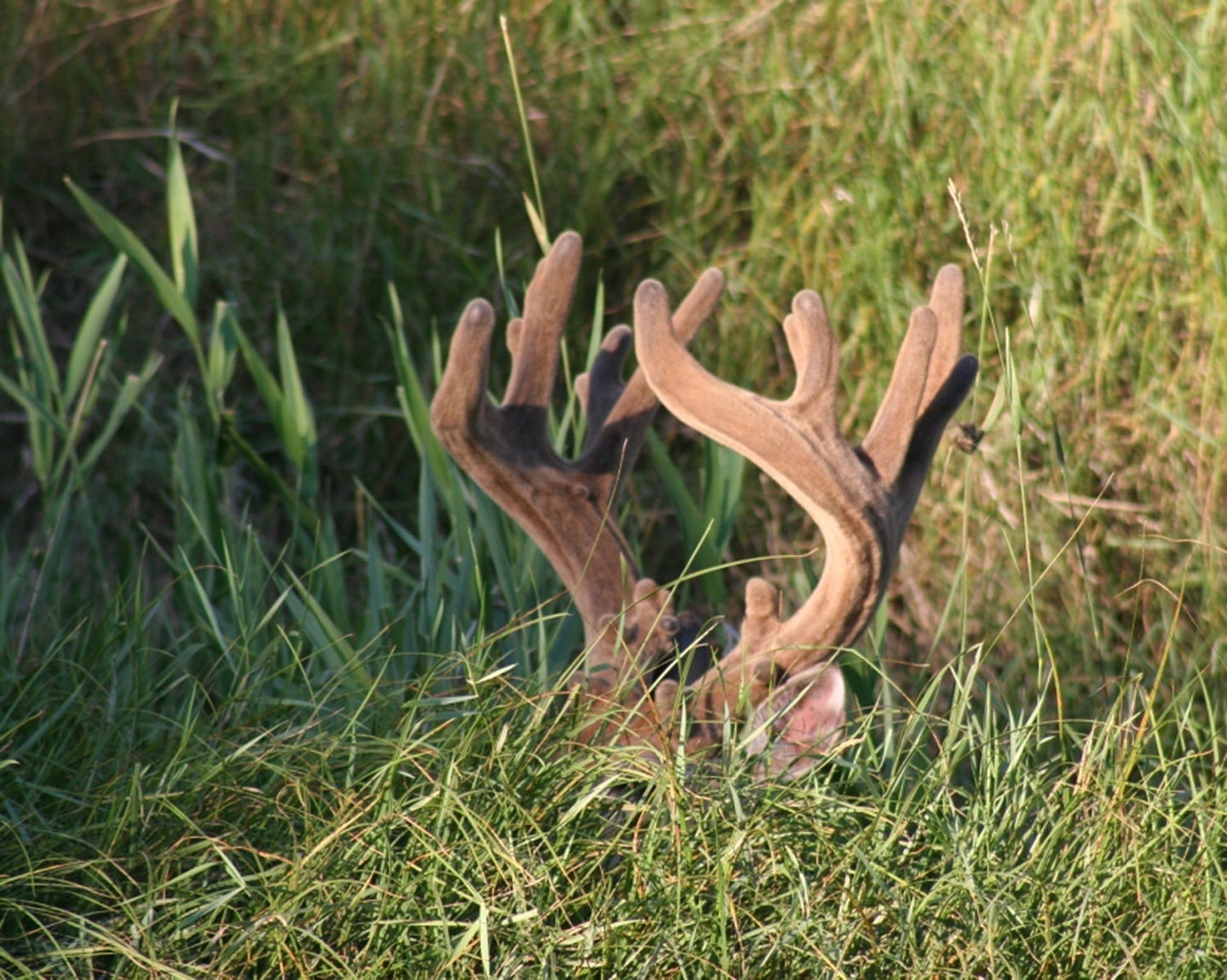 Praise the deer gods, it won’t be long now until you put the stress and uncertainty of the pandemic behind and head out for some much-needed rejuvenation time in a treestand. But don’t wait until the last minute to get ready. To tie your tag to a big whitetail, the advance work you do right now is as important, maybe more so, than the hunt tactics you’ll employ in a couple of months. Here’s your plan.

On your kitchen table with the A/C cranking, check topographic and aerial maps, either old-school paper ones or on apps like OnX Hunt or HuntStand, of the lands you’ll hunt this fall. Study the contours of crop fields, pastures and woodland edges. Key on timber strips, draws, creeks, and similar funnels that connect potential feeding and bedding areas of deer.

Scan the maps and visualize the likely patterns of bucks. If you’ve hunted a property before, think back to how animals fed, traveled and bedded according to prevailing winds.

By reading and studying maps you can eliminate some 60 percent of marginal deer habitat before you ever leave the house. Then focus your scouting in the 40 percent where you’re most apt to get on a good buck.

On late July and August evenings, drive to a hunting area and park where you can see a good piece, or if you have to sneak to a hill that overlooks fields of alfalfa, soybeans, or clover. In a more contiguous woods habitat, set up with a partial view of clear-cuts, power lines and other openings in the timber.

Once you’ve found a good vantage, go to work with a 10X binocular and a spotting scope. Buy and use the best optics you can afford. Then put that glass to work looking for velvet-racked bucks that gather to feed and posture out in the open at dusk.

Here are some interesting facts about those bachelor whitetails you’re fixing to gawk at:

Until now, your scouting has been long-range and low-impact, but I’m a firm believer that you also need to dive in and do a little ground pounding, especially if you’ll be on a new property this fall. You’ll bump some deer and a few bucks, but who cares? As long as you’re smart and sneaky, the deer will forget about your intrusion long before the season opens.

Take a few days to ground scout over the next few weeks. Tuck your pants into knee-high boots, lather on bug dope, spray down with scent killer, and go.

First, target food and cover that will be available to deer from September on throughout the season.

Biologists say that in late summer, whitetail deer are genetically programmed to set up their home ranges near nutritious food sources and with heavy bedding cover close by. Bucks can pile on the pounds (up to 20 percent of their body weight now through September) while moving short distances.

Finding deer and shooter bucks now is all about zeroing in on the best food sources: alfalfa, soybeans, clover, and corn. If you have any of these fields on your land or planted nearby on neighboring properties, you will have bucks in your woods to hunt.

Pennsylvania biologist Jeannine Fleegle adds, “It is no secret that acorns are a favorite (food source for deer). When available, acorns dominate their diet in fall and winter.”

Roam ridges and bottoms, and point your binoculars into the tops of oak trees. Do you see bunches of green nuts near the branch tips? Or are the limbs sparse?

Read Next: Strategies for Scouting Deer While You Fish

A big crop of acorns come September will draw and concentrate deer in the timber, so your hottest stands will likely be on ridges and in oak bottoms. Conversely, a lack of nuts and a poor mast year will scatter deer as they move around and seek other food choices; you’ll generally do better to hunt the edges of bean and corn fields, and browse thickets where does and bucks browse.

As you hike around, note pockets and strips of greenery, saplings, briers and weeds in proximity to the feed. Biologists denote security cover as “vegetation thick enough to hide 90 percent of a deer at a distance of 200 yards or less.” Stand back and look for thickets that fit the bill.

Walk field edges, creek bottoms, strips of woods and other funnels that look good on your maps. Look for main and secondary deer trails, and especially spots where they converge and cross water. Food and cover conditions will change as summer turns to fall, but some deer will use those trails and funnels from now to October and even through the rut.

It’s too early to find fresh rubs, but be on the lookout for scarred trees that bucks blazed last fall or two years ago. In a study in Michigan, a herd of whitetails was totally removed from a large enclosure, and no deer inhabited the joint for three years. The fourth year, deer were restocked into the pen.

That fall, the new bucks immediately began blazing the same trees that their predecessors rubbed years ago, which is fascinating, so use science to your advantage. Pinpoint clusters of old rubs and plan to hunt nearby because some bucks will travel in the vicinity of those old rubs this fall.

As you walk, look for and flag strategic trees in various corners of a property where you’ll want to hang a stand in a month or so. Or go ahead and set a stand or two on a ridge or in a creek bottom where your gut says bucks will travel in six or eight weeks.

I’ve had a few trail cameras running since June on my Virginia properties, but mid-July, when the bucks’ racks are on fire and growing fast, is when I really get serious.

Here’s a typical camera strategy for an 800-acre farm I hunt. On a hike next week, I’ll set two cameras on two half-acre clover plots we’ve hidden back in the woods. I’ll put more cameras on the edges of larger plots and a corn field, strapped to trees along prominent deer trails that wend out of the woods and thickets.

I’ll wind up by placing cameras in creek bottoms and near a beaver pond located back in the woods with good security cover nearby.

After a few weeks of checking images and tweaking setups, I’ll zero in on the field corners, edges and ridges where a shooter buck or two are feeding and traveling to bed. Although this intel will reveal their summer habits, the deer will be on a similar pattern when bow season opens, and some bucks will hang in the nearby woods all fall.

Several studies have shown that whitetail bucks will visit scrapes year-round, and often in late summer.

A mock scrape is not only scent-based, but also a visual sign. Rake out at least a 2×3-foot area below an overhanging branch where deer can see it. The prominent “lick branch” 3 or 4 feet above the scrape is all-important. Any time of year, and especially in summer, bucks will rub the branch with their faces, eyes, and racks, and chew on it.

Now is a great time to douse the scrapes with liquid scent (check your state’s regulations on scent use), or use a dripper system. Rather than using a doe-in-heat or tarsal rut lure now, doctor summer scrapes with an all-purpose and all-season curiosity scent. To pique the interest of bucks, you simply need the scrapes to reek of the barnyard smell of lots of deer.

Set a trail camera within 10 feet or so of each scrape and see who comes sniffing. This new scrape scent/cam strategy is a good option for areas where, due to CWD concerns, states have banned the use of corn and minerals to attract deer to camera sites.

Read Next: 3 Online Mapping Tools Every Deer Hunter Should Be Using

6. Put it All Together

One August, Iowa bowhunter Jay Gregory glassed a huge buck in a soybean field several evenings in a row. The stud was sneaking out of deep cover in a river bottom to feed and posture for does at dusk.

Jay took a chance, sneaked 100 yards into the river bottom and set out a few cameras. A stickler for controlling human scent, he wore rubber gloves and sprayed his entire body, boots, cameras and with straps with an odor-neutralizer.

Over the next few weeks, Jay got some incredible pictures. The buck looked even bigger on camera, maybe 200 inches.

Bow season opened and Jay snuck into the bottom and set a treestand. The first time in the stand he killed the 198-inch giant.

That is how you do it in the short term: Late-summer visuals of a big buck coupled with subsequent trail-camera images of the deer give you a fighting chance of punching your tag in early archery season.

One summer my friend Elliot spotted a particularly big 10-pointer roaming his ranch along the Milk River in northeast Montana. The buck traveled a primary core area of about 200 acres throughout July and August. He was very visible as he browsed in an irrigated alfalfa field on dusky evenings, then sneaked back to a field of standing corn to bed for the night.

The deer continued this pattern into the bow season in September, passing close to Elliot’s treestand several times, always just a tad too dark and late for a shot.

As the season progressed, the buck’s pattern changed, and he became less visible and more unpredictable. He would spend a week or so in sub-core areas a half-mile away as food sources and weather patterns changed.

But ultimately the buck came back to his primary lair where he felt most at home and comfortable. Elliot figured the deer would do that and he was ready.

On the second day of November, 51 days after he’d first spotted the 10-pointer back in July, Elliott spotted the buck coming and stood up in his stand. The pre-rut was kicking now, and the buck was a lot less cautious. My buddy lanced him in the alfalfa with 40 minutes of shooting light to spare.

Scouting early and often in July and August pays off, even if you don’t connect on a good buck during the first weeks of archery season. As summer fades to fall, you might spot your target buck only a few times or lose him altogether for weeks or even months. But the onset of the rut will often bring a mature deer back to his home core area, back to familiar ground where you spotted him earlier in the summer. Be there and be ready.