Tomahawks Are Back: These American Relics Have Seen a Resurgence in Military and Survival Situations

Throwing axes aren’t just for yuppies playing bar games. Here’s why tomahawks are just as effective today as they were on the American frontier 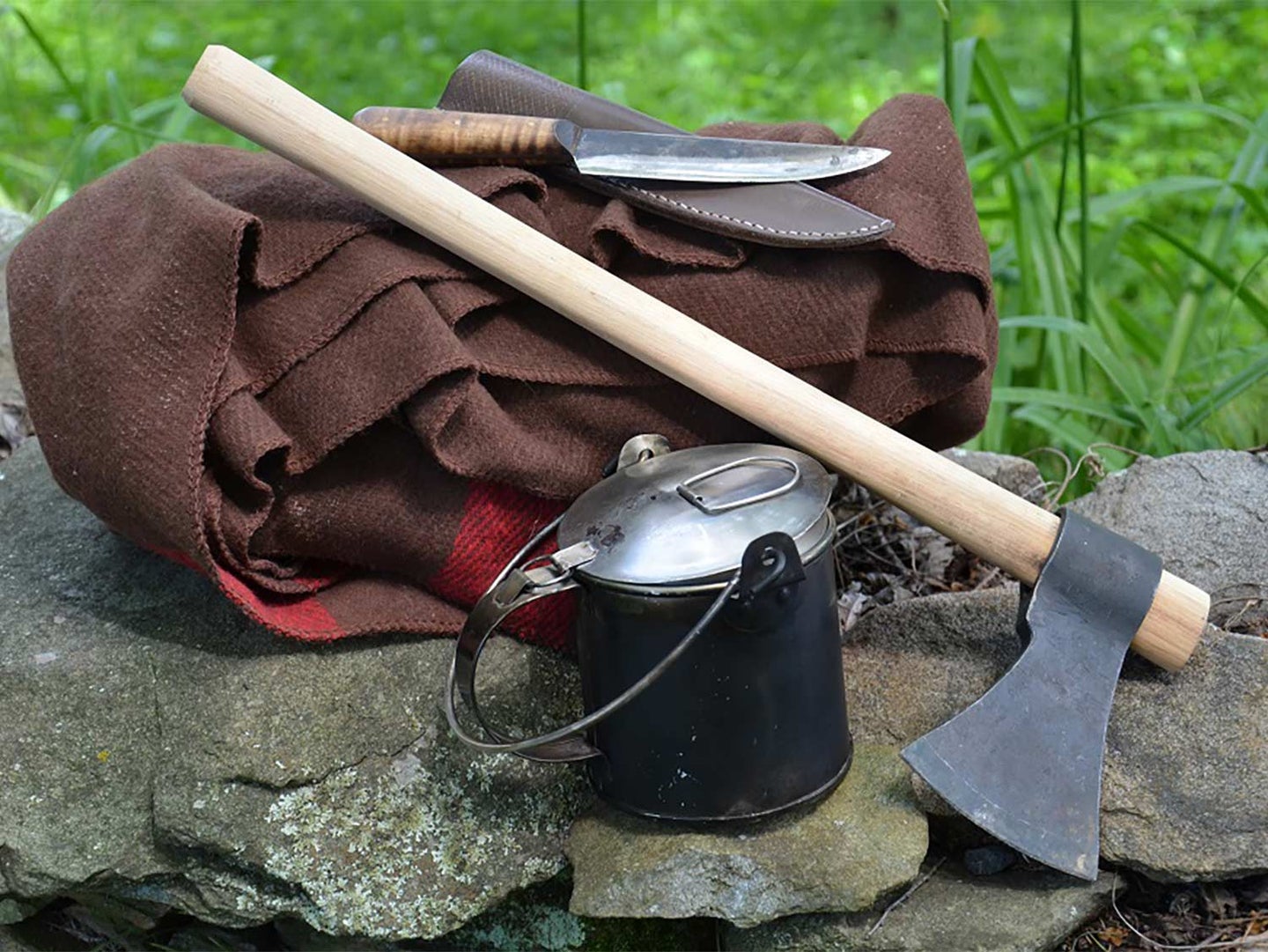 A collection of survival gear and a tomahawk. Tim MacWelch
SHARE

With the variety of edged weapons on the market today, we might tend to think of the tomahawk as an outdated relic that only belongs on the American frontier. Well, think again. Lightweight throwing axes predate Colonial America and they’re still being used today by military and law enforcement professionals and everyday outdoorsmen and women. Discover the ancient origins of this simple tool, and learn how it can still be a useful part of your outdoor kit. But if you just want to learn how to throw one of these bad boys, here’s Outdoor Life contributor Aram von Benedikt with some tips on how to throw a tomahawk like a real pro.

The word “tomahawk” is based on a phrase from the Native American Algonquian language. This widely spoken tongue has been used by dozens of Native nations up and down the East Coast, and the language has given us many common English words we still use today (like moccasin and hickory). Some scholars credit Captain John Smith of the Jamestown settlement for first jotting down the Powhatan phrase “tamahaac,” though different versions and spellings of the word can be found throughout history. These names essentially translate to “a tool for cutting things off” and that’s just what a tomahawk does.

These one-handed axes have straight handles and small axe heads. Lightweight and versatile, they have been used (and still are used) as handheld tools and thrown weapons. Native people of the New World had been using stone axes for thousands of years prior to European contact, but when the sharper and more durable metal axes became available as trade goods in the 17th century, the popularity of these tools surged. Today’s tomahawks are sometimes made as replicas of these original iron trade items, though more modern construction techniques are also used. Some modern tomahawk heads are made from drop forged steel and heat treated for shock-resistance and durability, with synthetic handles replacing the traditional hardwood axe handles. Tomahawk enthusiasts today can choose the traditional styles and construction, or something more modern and updated.

When iron tools and implements first came to the New World, the Native people must have been amazed. Iron pots could be dropped on the ground without shattering like an earthenware pot, and iron axes were much sharper than stone axes (cutting down trees in a fraction of the time). Native Americans had been making small axes with straight wooden handles for centuries, but so had the Europeans (especially the French). The design of the tomahawk isn’t strictly Native American. The Frankish warriors of the early Middle Ages were known to carry lightweight throwing axes known as “franciscas,” which were used as close-range projectiles and also employed as hacking weapons during hand-to-hand fighting. A sixth century historian named Procopius once wrote of the francisca that: “…they are accustomed always to throw these axes at one signal in the first charge and shatter the shields of the enemy…” Axes like these continued to be popular into the late Middle Ages, being used by both lowly foot soldiers and knights.

Once traders and blacksmiths saw how excited First Nation people were about iron tomahawks, they started experimenting with new varieties and variations. Some tomahawks were simply adorned, while others were elaborately decorated. Some had decorative file work on the edges, and others had shapes punched through the blade (hearts were quite popular punched shapes, for some reason). But these all pale in comparison to the creativity of the pipe tomahawk. With a functional smoking bowl as a poll, and a hollow channel through the handle – the user could either smoke a pipe with their allies or chop the heads of their enemies. And occasionally, the pipe bowl was used as a weapon too. One story (which may or may not be embellished) recalls the famous frontiersman Simon Kenton (a younger contemporary of Daniel Boone) being struck in the head with the bowl side of a pipe tomahawk, smashing in a coin-sized disk of his skull and nearly killing him.

Tomahawks See a Resurgence in the Military and Law Enforcement

World War II Marine Corps veteran Peter LaGana is credited with bringing the tomahawk out of obscurity and back into military use at the end of the Vietnam War. In the latter half of the 1960s, he updated the age-old tomahawk design and sold roughly 4,000 tomahawks to selected units of the U.S. Armed Forces. LaGana’s tomahawk head featured a classic axe blade on one side, and a straight spike on the other. Similar to nautical “boarding axes” from Colonial days, the spike could be used for puncturing, prying, and breaching doors. As the war (and public opinion) soured, LaGana’s company closed in 1970, but not before the tomahawk had been revitalized and reintroduced to a new generation. Today, several companies still make “Vietnam tomahawks” for commercial sale.

Jump forward a few decades from the Vietnam War, and the “tactical” tomahawk has enjoyed something of a resurgence among U.S. soldiers in Iraq and Afghanistan. This heritage tool had obvious utility as a back-up weapon for hand-to-hand combat but it was also a useful tool in the field. The U.S. Army Stryker Brigade in Afghanistan, the 172nd Stryker Brigade Combat Team based at Grafenwöhr (Germany), the 3rd Brigade, and the 2nd Infantry Division out of Fort Lewis began carrying and using tomahawks as part of a rescue kit and as “modular entry tool.” And soldiers aren’t the only modern users.

Law enforcement agencies, particularly SWAT teams, have adopted tomahawks as a multi-use tool that is both lightweight and versatile. Favored models include prybar features for breaching doors and windows, rope cutting notches, and cutouts that allow it to be used as a wrench.

How to Throw a Tomahawk

But here’s the foundational problem with tomahawks as a projectile weapon: Even if you are a great thrower, would you really want to throw your weapon away? Some fighters consider this strategy a bit like throwing your empty rifle at the bad guy, instead of reloading it. While axes like these have been thrown for ages, an ill placed strike may do little damage to an adversary. A miss won’t hurt them at all, and it may even hurt you (since you just tossed a weapon to them). Sure, historians have documented instances where tomahawks were thrown (such as the Frankish battle strategy of lobbing volleys of axes at enemy lines), but there are even more scenarios in which you might want to hang onto your weapon.

With all of that in mind, there’s no denying that axe and tomahawk throwing has been a pastime in America since the earliest recorded times. Not only is it popular among historical reenactors in North American, enthusiasts are seeking out hand-forged tomahawks from master craftsmen and competing in high stakes tomahawk throwing competitions. Things can get pretty serious, with high dollar ‘hawks being thrown for big money prizes.

But these aren’t the only modern people using this heritage tool. Tomahawks have been embraced by those interested in camping, bushcraft, and wilderness survival. Since many tomahawks weigh less than comparably-sized axes, they are easier to carry into the field for chopping and camp tasks. And while the axe head geometry doesn’t split wood as smoothly as other axe styles, that doesn’t stop the tomahawk from being chosen as a lightweight hatchet alternative. With a hammer poll on the ax head, the tomahawk can be just as useful in the woods today as it has ever been.