Capt. Kevin Olmstead is a veteran angler and captain, but he made some tragic mistakes that almost cost him his life 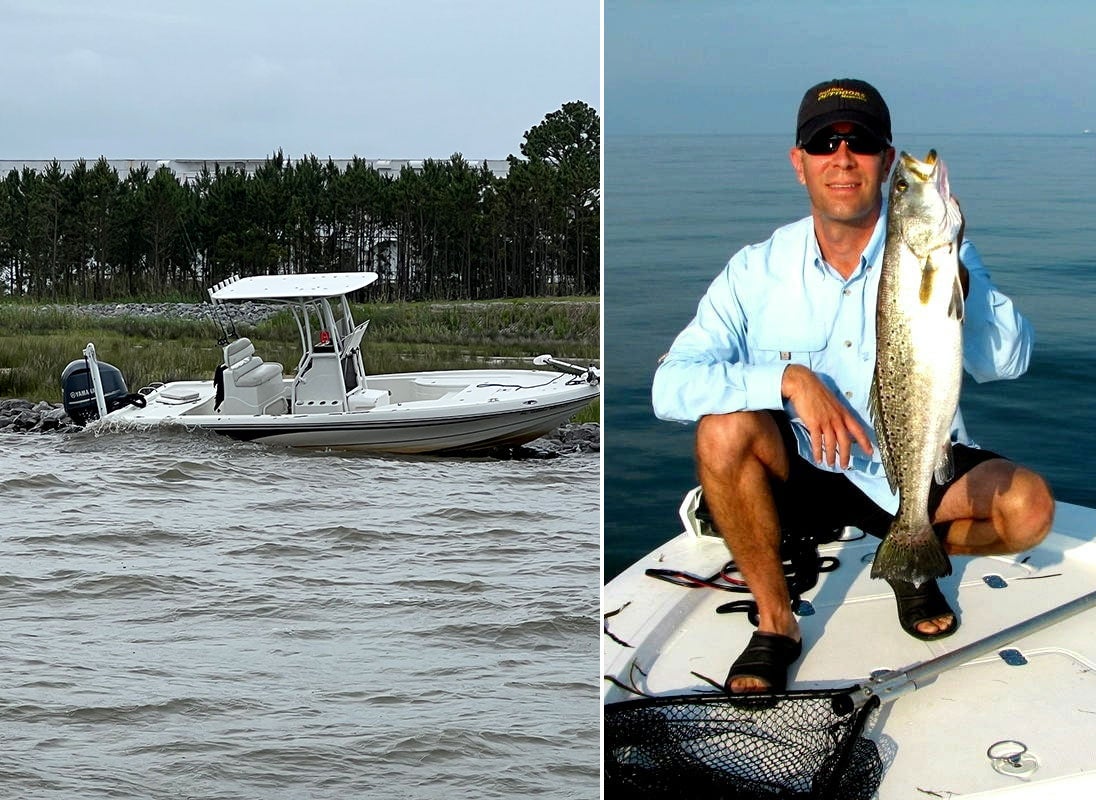 Capt. Kevin Olmstead, 53, was fishing alone the morning of May 21 just off Mobile Bay. He’d been wade fishing, catching speckled trout. Around mid-morning, he decided to get back in his beached boat and run for home across the bay to Fairhope, Alabama. He’d made this same trip on many occasions, however this time it would end with him spending hours treading water—and nearly losing his life.

Olmstead started his 23-foot Ranger bay boat about 10 a.m., and noted that the wind and waves had picked up as he was getting oriented for the run to the ramp. He headed toward the West Fowl River and ran about three miles.

It was windy and the water was rough, with 3- to 4-foot waves. So he slowed the boat, believing he put the motor in neutral, and turned to a boat compartment to get a life jacket to put on.

Olmstead is a highly organized, safe boater, and he always uses a wrist-lanyard kill switch. But he had to remove it to leave the Ranger console and retrieve a life jacket.

“I thought I had the boat in neutral, but I didn’t,” says Olmstead, a 20-year charter captain and owner of Point Clear Fishing Adventures. “I took off the kill switch lanyard, and when I stepped around the boat console a wave hit the boat. I lost my balance and fell into the water.”

When he surfaced, the boat was still in gear and moving. With the motor kill switch not connected to Olmstead, his 300-horsepower Yamaha outboard was slowly moving the Ranger away from him in the water.

“The boat was going by me, and I reached up and grabbed it, getting a one-finger hold on the swim ladder at the stern,” he says. “I couldn’t hold on, because of the boat weight and waves, and it pulled away and I lost my grip.

“That’s when my heart sank and I started panicking. I thought I’d have a heart attack, and knew I was in a whole lot of trouble.”

Olmstead then reacted like “someone was guiding me,” he says. He took off his wading boots, removed his shorts, and then his button-down Columbia long sleeve fishing shirt.

“I tried frantically to make the shirt into a flotation device by tying the sleeves in a knot, then catching some wind in the shirt and making it like a balloon,” he says. “It didn’t hold a lot of air, but enough that it helped keep me up – or at least I believed it did.”

Olmstead was left treading water, hanging onto to his slightly inflated fishing shirt for the next 10 hours.

Several times he thought of trying to reinflate the shirt with air, but was afraid he might lose the shirt or not be able to add air to it. So he kept the shirt close to his chest with one hand, treading water with the other.

His Ranger boat slowly disappeared, eventually running onto the jetties miles away near Bayou La Batre, where it crashed onto rocks and swamped. Its fiberglass hull was destroyed. Luckily, that unmanned boat ran aground near a bait shop. People in the bait shop spotted the crashed boat and called police with information on the boat, including its Alabama registration numbers.

That first call was made around 4 p.m. Soon local police, marine patrol, and an estimated 100 fishing friends and acquaintances of Olmstead’s (nicknamed “KO”) had started a search operation throughout the sprawling Mobile Bay and Mississippi Sound.

“My goal was to just stay afloat, but it was tough because the shirt barely helped and every few seconds a big, salty wave crashed over my head,” Olmstead says. “I [unintentionally] drank a lot of salt water, and threw up a lot, and had to switch arms treading water often, with one hand still hugging my shirt with air.”

At times he put the shirt under his legs to give them a rest and tried to lay on his back. But the waves were brutal. He knew he had to pace himself and hang on.

“I kept thinking about my wife and two sons,” he says. “I had to survive for them.”

In addition to exhaustion from treading water, and fighting to breathe and not gulp sea water, Olmstead was beginning to feel the deadly effects of hypothermia.

The water temperature was about 70 degrees, and he started shaking and convulsing by 3 p.m. His his body was beginning to shut down from being in water that was well below his body temperature.

Meanwhile, help was mobilizing. Multiple fishing buddies got involved with their boats and searches were underway by about 5 p.m. as they began looking for “KO.”

Like all good mariners, Olmstead was well aware of tide flow, and it was beginning to turn hard and strong. He knew that soon outgoing water, pushed even stronger by the wind, was going to take him out into open water of the Gulf of Mexico, where he’d never be found in time to save his life.

He had to push on to survive, and that’s when he spotted a channel marker that he figured he might be able to reach and cling to until help arrived.

The marker was about a quarter-mile away, and from 3 p.m. to 6:30 p.m. he fought wind, waves, and hypothermia until he got near channel marker 34 in the Intracoastal Waterway. The structure was coated with razor-edged barnacles. But Olmstead got some relief from it by clinging to the marker with the palms of his hands, gripping it lightly.

There were no leg supports or ladder to climb onto the channel marker. The waves and tide flow were strong, and he was convulsing and shivering from hypothermia setting in.

But help was on the way.

At about 7:30 p.m., as it was getting dark and the cool of night was setting in, two of Olmstead’s buddies spotted channel marker 34, and started running to it in their boat. A short time later, local angling pals Rich Tourne and Kyle Mitterknight spotted Olmstead, got to him and hauled him into their boat.

Olmstead was in serious trouble, convulsing and throwing up, so they set him in a boat chair and covered him to get warm. Shortly thereafter an Alabama marine police boat showed, and Olmstead was transferred to it, then taken to a waiting ambulance at the public boat landing in Bayou La Batre. In the ambulance, Olmstead’s vital signs all checked out remarkably well, except for hypothermia effects.

Not bad for a 5-foot-8, 140-pound man who doesn’t consider himself a strong swimmer.

Read Next: The Best Life Jackets for Boating, Kayaking, and Fishing

An emergency helicopter airlifted Olmstead to University Hospital in Mobile. There he was treated for hypothermia, and released that night at his insistence, though doctors wanted him to stay overnight in the hospital.

“I just wanted to get home and sleep in my own bed with my family near me,” Olmstead says.

The aftermath of Olmstead’s ordeal has been overwhelming, with friends and family contacting him.

“It’s been an emotional roller coast,” he says. “What I want mostly from this is for people to learn to always use a boat kill switch and wear a life jacket at all times.”

One fishing friend called Olmstead recently and he answered the phone saying, “you calling to book a charter fishing trip with a guide who crashed his boat onto jetty rocks and almost drowned?”

“No,” replied his buddy. “I called to see if you were offering swimming lessons.”