Hunger can start to make anything look like food 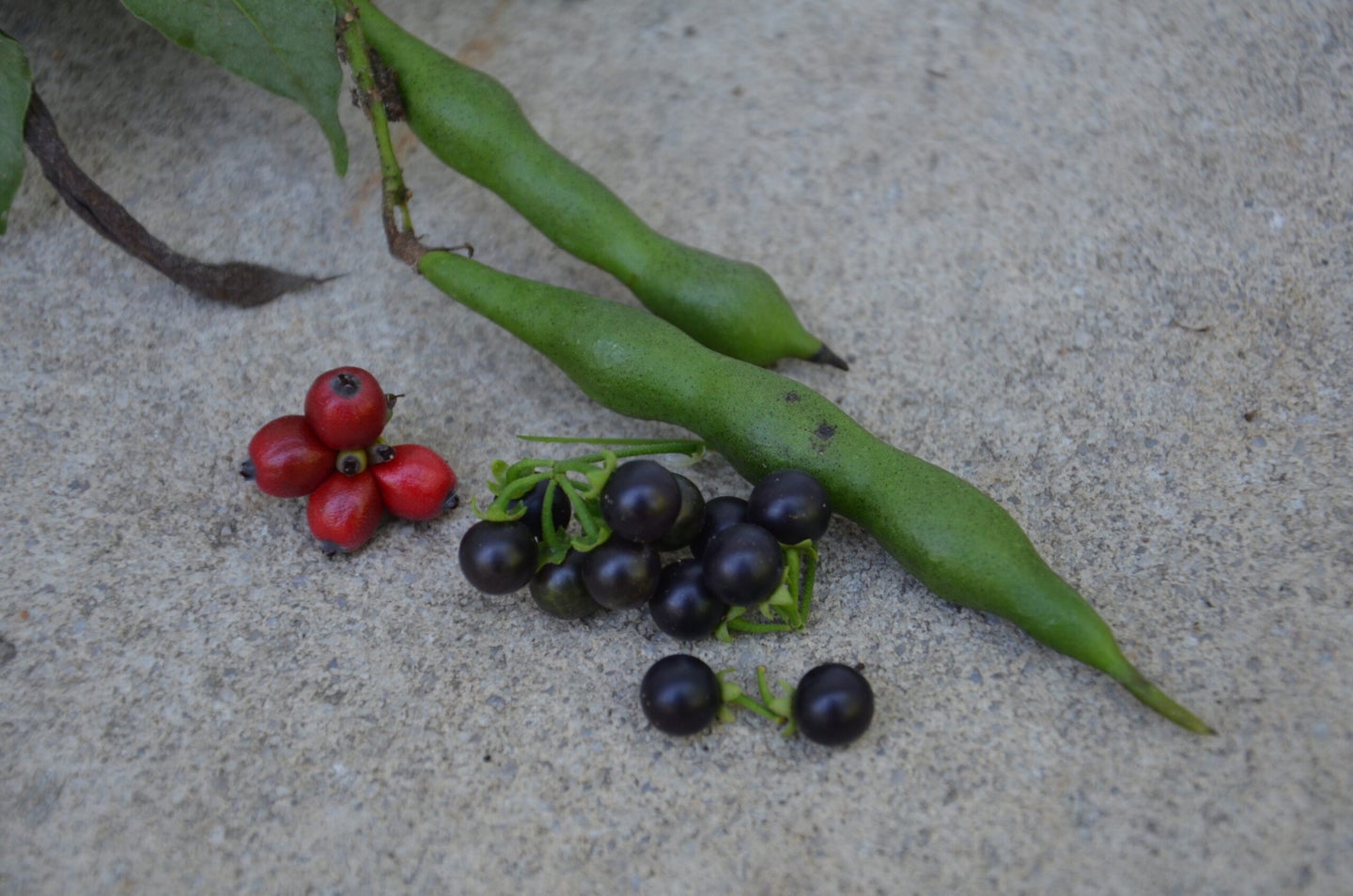 There are some wonderful wild edible plants scattered across this continent. Pick up a foraging book or take an edible plant class and you’re in for a surprise. You’ll start to see these edible plants everywhere. And then, as you dig a little deeper, brace yourself for another surprise. Hunger can start to make anything look like food. And when the nasty wild plants look appetizing, getting caught in the wilds without food becomes an even more dangerous scenario.

Some of the most common and popular wild edible plants have an “evil twin.” These plants look similar to their edible counterparts, but are in fact dangerous. Before you start wolfing down unknown nuts and berries, make sure you’ve memorized the following list of plants in our OL Survival Gallery of toxic wild plants.

This large member of the carrot family may have foragers thinking they hit the jackpot, and a big wild carrot is just below the surface. But in reality, this is a plant that is harmful to even touch.

Giant hogweed (Heracleum mantegazzianum) is a European native that is now considered a noxious weed by the federal government. This plant can reach heights up to 14 feet tall, and hairy stalks and white flower clusters closely resemble the wild carrot (also known as Queen Anne’s lace). Giant hogweed is surprisingly dangerous, as it is covered in a compound that causes a severe light-sensitive skin reaction.

Within 48 hours of contact, the plant causes dark painful blisters that form after exposure to sunlight. These blisters go deep and result in scarring can last up to six years. But wait—there’s more. Getting this “sap” in your eyes can cause permanent blindness. Stay away from this pretty wild flower. If you see any purple spots on the stems (underneath the fuzz) or the leaves are the wrong shape for wild carrot, don’t even touch the plant. If you do touch it, wash aggressively with soap and water and stay out of the sun for a few days.

Not everything that looks like a grape happens to be a grape. The Canada moonseed (Menispermum canadense) is a climbing vine with grape-like leaves and clusters of grapey-looking fruits. These fruits are not grapes however, and are potentially fatal if eaten.

To tell these look-a-likes apart, check the fruit seeds. Even though many wild grape species ripen at the same time as moonseed, the seeds are very different. Grapes will have 2-4 seeds that are round or oval in shape. Moonseed fruits have only one seed in each fruit and it has an odd shape, somewhere between a crescent moon shape and a Pac-man shape. If you think you have grapes, check the seeds before eating any of them.

Horse nettle (Solanum carolinense) plants are dead and dry during the winter, but their fruits can remain plump and juicy. The greenish or yellow-colored, cherry-tomato-shaped fruits of horse nettle could look like a meal to the uneducated forager.

Their tomato-like appearance should be a warning, though. The tomato’s family (nightshade) is full of wild relatives that are harmful to humans. The horse nettle fruits and most other parts of the plant are poisonous to varying degrees from the toxic alkaloid solanine.

Eating fruits can cause abdominal pain, and possibly lead to circulatory and respiratory depression. Just remember that there are no edible “wild tomatoes” in the lower 48.

The pokeweed plant (Phytolacca americana) has some of the juiciest and most appetizing looking berries of late summer and early fall. But don’t be fooled by this alluring look. These berries are animal food, not people food. Migrating birds, deer, and many other animals can chow down on these poisonous berries with no ill effect. Humans aren’t so lucky.

A handful could kill a child, and a little more could take out an adult. Pokeweed can be spotted easily by the grape-like clusters of purple-black berries and brightly colored, purplish-pink stalks up to 8 feet tall. Seriously, they look delicious, but don’t eat them.

You can get the itch and blisters from touching these plants yourself, but that isn’t the worst of it either. These irritating oils are capable of hitching a ride on your boots, your tools and even your pets. Pick up somebody’s hatchet after they chopped poison oak, or pat the dog on the head after he rolled in poison sumac – and you’ll get the itch just the same.

Burn some of these plants by accident or on purpose, and everybody around that fire will be going to the hospital soon. Poison ivy, oak and sumac contain a substance called urushiol, which is a clear liquid compound found all parts of the plant. Urushiol binds to your skin cells, creating an allergic reaction of itching, irritation and sometimes painful rash in most people who touch it.

Wild cherry trees (Prunus spp.) can produce a tasty cherry fruit, but these same trees can also be a source of toxicity. The wilting leaves of cherry develop a high concentration of cyanide. While humans aren’t normally drawn to the odor, livestock frequently eat this dying foliage and end up dying themselves. The cherries themselves also contain cyanide in their pits, so don’t try to grind those up for flour or any other human foods.

Virginia creeper (Parthenocissus quinquefolia) is a central and eastern vine species that often gets confused for poison ivy. But on closer inspection, Virginia creeper’s cluster of toothed leaves has five leaflets, rather than the three leaflets that inspired the adage “Leaves of three, let them be” for poison ivy.

Virginia creeper grows as far north as Manitoba, and as far south as Texas. Though a tiny fraction of the population can actually get a rash from creeper (just like poison ivy), a rash isn’t the worst this plant can dish out. The purplish berries of Virginia creeper are actually poisonous, to the point of confirmed human fatalities.

These small shiny black berries are one of the most dangerous look-alikes, resembling blueberries to the unobservant. There are several species of nightshade (Solanum spp.) growing wild throughout the U.S. Just a handful of the bitter berries can contain deadly amounts of toxic alkaloids, among other compounds. If your “blueberries” don’t taste sweet, or don’t grow on a woody shrub, chances are good that you’re eating a dangerous nightshade instead.

Several species of buckeye tree (Aesculus spp.) grow throughout the central and eastern United States. These native trees have nuts that are surprisingly poisonous. Buckeye nuts have a shiny brown shell, which is surrounded by a dull textured husk – similar to the outer husk structure of hickories (Carya spp.).

Break the tree nut open, and you’ll find a solid, whole nut meat inside a buckeye. This is in contrast to the complex shape of the hickory nut meat, which resembles the shape of walnut or pecan internally. Also, be careful that you don’t confuse buckeyes with chestnuts, as chestnuts have a shiny nutshell under an outer husk. Look for the needle covered husks on chestnut, and you’ll be working with nut.

There may be no shortage of these shiny red berries in the fall and early winter in the eastern United States. Numerous native and non-native species of dogwood (Cornus spp.) can be found growing in the understory of forests or in transition zones between forest and field. The red berries of dogwood are eaten by birds, but should be avoided by people.

The pretty red berries of the American holly (Ilex opaca) can certainly look inviting. You might be tempted to taste them, especially after you see the birds gobbling them down. But remember that birds can tolerate poisons that would kill a human. Holly berries contain a number of toxins, and while fatalities are rare from holly consumption, there have been some documented deaths.

Be exceedingly careful of wild legume family members. Sure, we eat many different species of peas and beans from across the globe, but these are the edible ones that are cultivated. Plenty of wild “bean” relatives still exist, and some of them are quite deadly. Few are as bad as the seeds of wisteria (Wisteria spp.). Inside the velvet covered bean pod lie several flat, dark colored seeds. All parts of the plant, including the seeds, contain a glycoside called wisterin which is toxic if consumed.

One Native American name for this ubiquitous shrubbery translates into English as “suicide bush”. Rhododendron is a typical understory shrub through much of the eastern United States. The shiny green leaves look like bay leaves, which could be a dangerous substitution to spice up your emergency stew. Although the leaves of this shrub would be deadly, if brewed into a strong tea, it’s unlikely that anyone would consume these foul smelling leaves on accident.