With just a little information to go on, a Michigan DNR officer tracked down and rescued a severely injured hunter who had been trying to retrieve his treestand 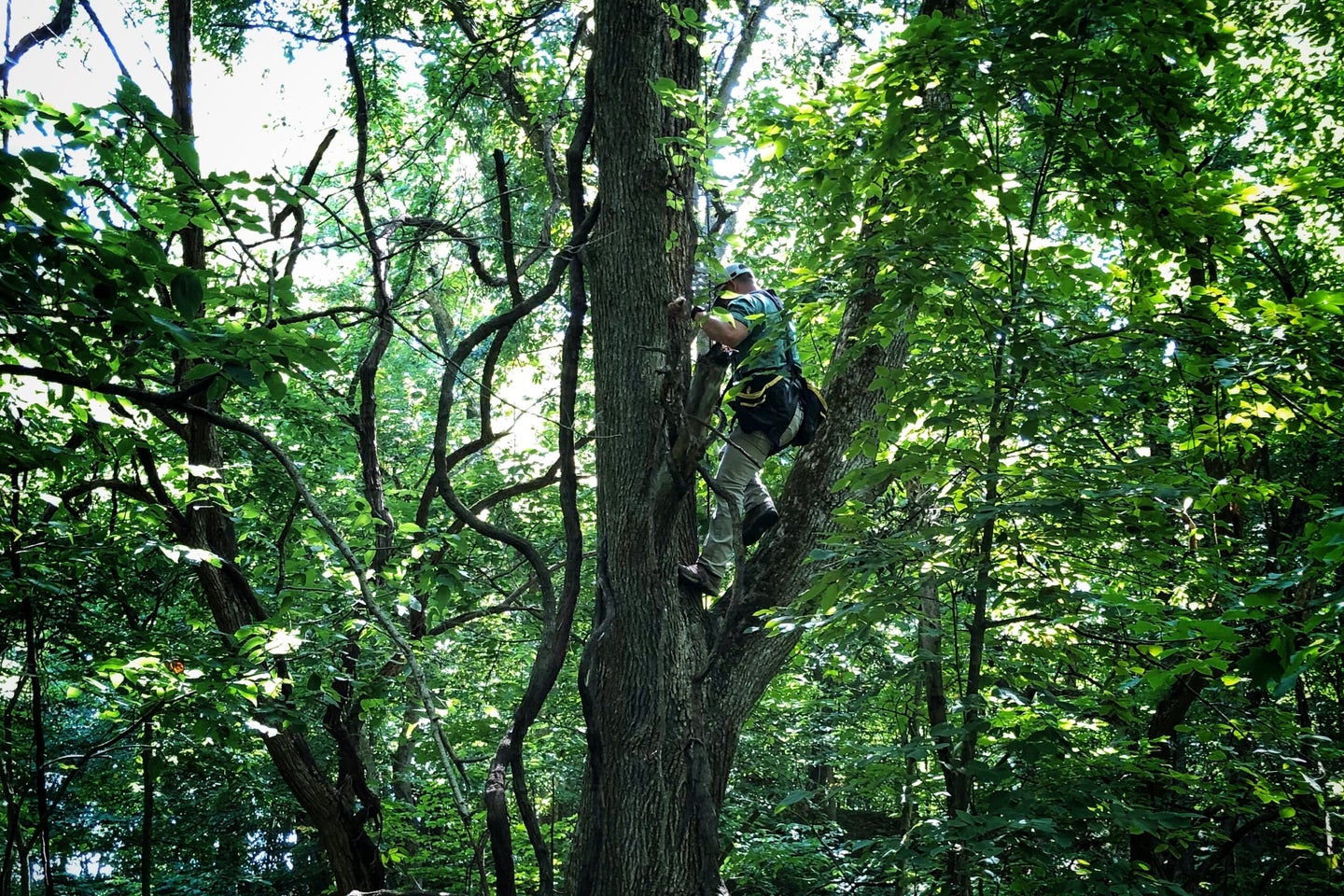 Any hunter planning to do treestand work this summer should also follow safety precautions, like wearing a harness, when climbing trees or into stands. Natalie Krebs
SHARE

With a little luck and good tracking work, a Michigan official was able to locate an elderly man who had fallen from a treestand last week. The unidentified man was performing pre-season work when he fell from his treestand and broke his back, he told 911 dispatchers in a call placed around 8:30 p.m. on Tuesday. The man’s call dropped due to poor cell reception, preventing dispatchers from determining where the injured caller was phoning from, the Michigan Department of Natural Resources said in a press release. Officials were able to record the cell number used to place the call.

DNR conservation officer Josiah Killingbeck was on patrol when he heard about the distress call. After consulting with other officers who researched the phone number, he learned it belonged to a 75-year-old man from Hudsonville, Michigan. When law enforcement spoke with the man’s son, he told them his dad had gone to the Whiskey Creek area to ready his treestands for deer season. He expected officials would find his dad’s truck parked somewhere along the road.

Killingbeck drove to the area, where he discovered fresh tire tracks on a dirt road. He followed the tracks to an unmarked road. At 9:39 p.m., Killingbeck discovered the man’s red pickup truck parked on the road. He began searching around the truck and spotted a faint path, then a set of footprints in a dirt trail. Killingbeck began yelling for the man, and eventually heard the man’s weak voice calling back.

At 9:53 p.m., nearly 11 hours after the man had fallen to the ground, Killingbeck discovered the injured man at the base of a large oak. A treestand was on the ground nearby. The man told Killingbeck he had been trying to get the stand out of the oak when he fell. He couldn’t call for help sooner because cell phone service wasn’t available. More emergency personnel arrived, including Michigan State Police, and at 11:30 p.m. the man was carried out of the woods on a backboard, complaining of pain in his back, buttocks, shoulder, leg, and knee. He was airlifted to a trauma center for treatment.

Preseason preparations are in full swing across the country, and early bow seasons are approaching. Remember to always tell a friend or family member exactly where you’ll be and when you expect to return, even if you’re just going for a short trip to retrieve a treestand. Always use proper safety equipment like a harness when climbing treestands for work or to hunt out of them.

Read Next: Why You Should Wear a Harness Every Single Time You Climb a Tree

“Whether you are hunting, hiking or trail riding you should always share your plans with a family member or friend,” Lt. Joe Molnar of the Michigan DNR Law Enforcement Division said in the press release. “In the plan, you should list where you are going to be and when you expect to return. You should also include any alternate locations you may be at, in case weather or other conditions change your plans. Sharing this information could be the difference between life and death if you are injured and cannot call for help.”