Watch a Bobcat Savagely Take Down a Mule Deer 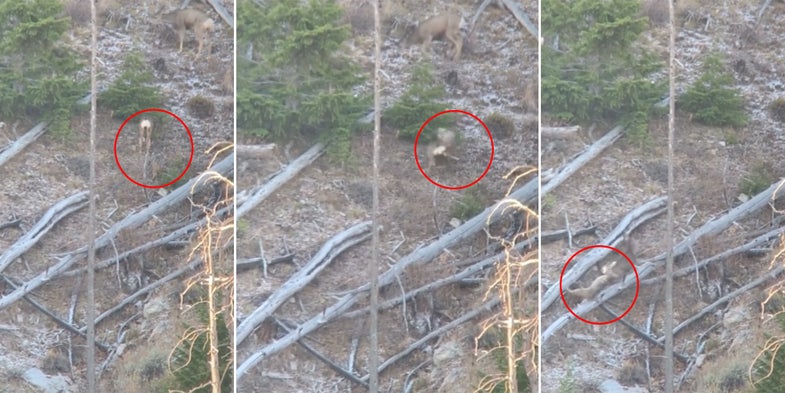 When most people think about mule deer predators, they picture canids and big cats—namely wolves, coyotes, and mountain lions. But bobcats are just as clever and tenacious as their bigger-bodied cousins. As you can see in the video below, these nimble cats are more than capable of taking down a deer.

The video was recorded a little more than two years ago by Will Hoffman, a big game hunter from Idaho. Hoffman spends a lot of time exploring his local mountains, chasing elk and mule deer in season and hunting for sheds the rest of the calendar year. He’s had plenty of wildlife encounters, but he still ranks the savage take-down video as one of the coolest things he’s ever seen in the wild. He says the video has been viewed more than 20 million times since he first shared it on social media in 2020.

“I’ve seen several mountain lions, but I don’t think I’d ever glassed up a bobcat in the wild,” Hoffman tells Outdoor Life. “It was just so crazy. I’ll never forget it.”

Hoffman explains that he was glassing for mule deer in a steep canyon when he recorded the video. It was Oct. 11, the second day of deer season, and Hoffman had spent most of the morning shivering behind a spotting scope.

“I was watching a group of 11 or so deer, and there was a decent 3-point, but not something I was going to shoot,” Hoffman says. “I kept going back to this group to see if a bigger buck would step out, and a couple times I caught just a trace of movement. And then at one point I saw this bobcat.”

Hoffman watched the bobcat through his binoculars for the next 30 to 40 minutes. The deer continued to feed in the opening, completely unaware of the cat that was circling. After singling out the smallest muley in the group, the bobcat tried creeping up on the yearling a few times, but the buck kept getting in its way, causing it to back off and adjust its angle. When it dropped into the ravine below the deer, Hoffman knew the bobcat was getting ready to pounce. He grabbed his phone scope and started recording.

“It was around zero degrees that day and blowing 20. I could even see the trees moving, so it was perfect stalking weather,” says Hoffman. “I’d watch [the bobcat] move in, and then he’d back out. Then he dropped down and started working up that ravine. And I’m sitting here trying to keep it together because I was just so amped watching this happen.”

When the bobcat finally pounces, it’s only inches away from the yearling muley. It jumps up and grabs ahold of the deer’s neck, and the two come tumbling down the drainage. After falling twenty feet or so into some downed trees, the bobcat appears to lose and then regain its grip on the deer. The video then pans out as Hoffman loses the two animals in the scuffle.

“I tried to move my scope down just a little bit and ended up fumbling the video,” he says. “I honestly don’t know if he killed that deer or not, but I glassed that mountainside for like an hour afterwards and never could find him.”

While it’s unclear if the cat secured its meal in this instance, it wouldn’t be the first time that a bobcat has been documented killing a deer. This is definitely more common among whitetails, which are typically smaller than mule deer. Bobcats are also more abundant in the Southwest and the Southeast than they are in Idaho. One study from the Florida Everglades found that bobcats killed at least 33 fawns and 6 adult whitetails over a three-year period.

“Throughout their range, bobcats prey on small- to medium-sized species,” the authors of that study wrote. “Bobcats also kill large prey, such as white-tailed deer…[while] in some areas, bobcats prey extensively on fawns of white-tailed and mule deer.”

Read Next: Watch: Bobcat Fights a Python, Steals Its Eggs

Looking at the Western United States, the Utah Division of Wildlife Resources lists bobcats as a common predator of mule deer, especially in areas where cougar populations are lower. And in Wyoming, game wardens found proof of a bobcat-killed mule deer as recently as two years ago. After coming across the partially buried carcass, a wildlife officer set up a trail camera and captured footage of the bobcat returning to the kill site to feed.