10 of the Top Moose Cartridges and Bullets 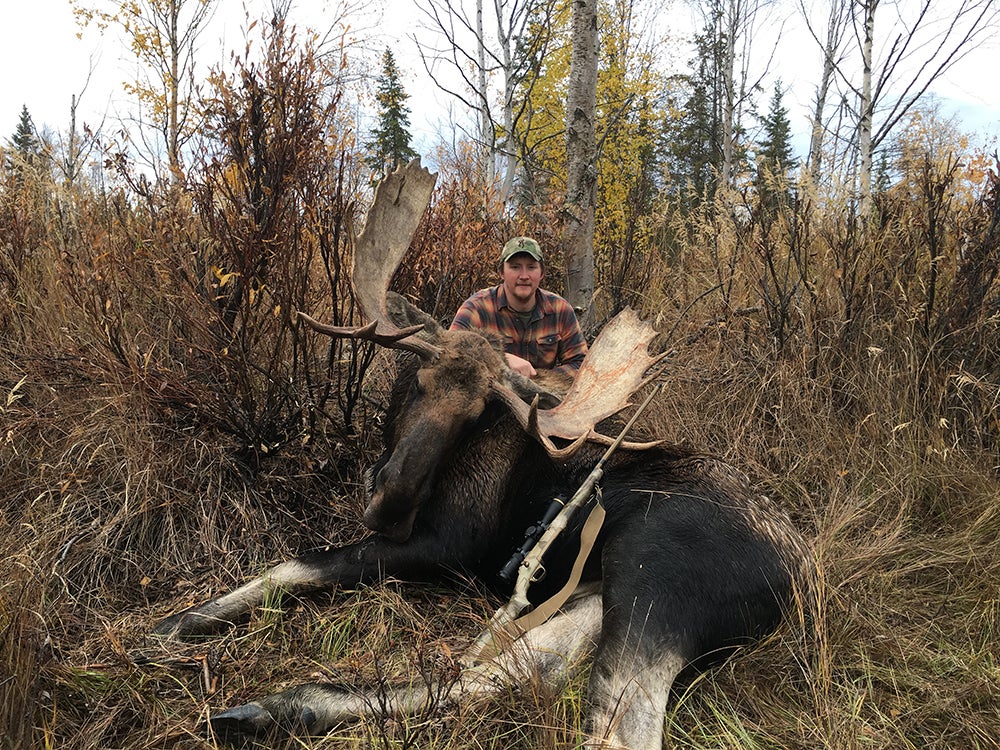 Picking the 10 “best” or most favorable cartridges for hunting any animal is a highly subjective and challenging task. The bigger the animal, the more heated that debate tends to be. So when it comes to moose, the word BIG will pop into most people’s minds, and cause them to eliminate a swath of fine cartridges from consideration. I’ve lived in Alaska, killed many moose myself, and witnessed many more meet their end.

Given that, let me just establish one thing: Moose are generally wimps. For most hunters in the Lower 48 traveling to hunt moose, their go-to deer rifle is a fine choice. Yes, moose are enormous, powerful animals—but they also have large and powerful circulatory and respiratory systems. A well-placed bullet through these vitals will kill a moose quickly. So, I tend to go with a rifle that is comfortable to shoot and very accurate. There may not be a lot of flash to this list, but I doubt there’s a collection of cartridges that has put more moose meat in the freezer than this one.

Moose Guns: How Much Is Enough?

I was just writing up an account of a moose hunt I did last fall in Newfoundland and was recalling a conversation I had with one of the hunters in camp who had traveled from New York to go for his first bull.

We were getting ready to check our zeros at the makeshift range outside of camp and as he uncased his rifle, a Browning A-Bolt in 7mm Rem. Mag., he was genuinely concerned that he was undergunned. Seems his buddies back home had told him a .338 Win. Mag. as the “minimum” for moose.

Yes, a moose is a large animal but any deer caliber—starting with the 6.5s—shooting a bullet designed for deep penetration is plenty of gun.

I shot my bull with a .338 Federal—not a .338 Win. Mag. by any stretch—and both my shots (with 185-grain Barnes Triple Shocks) completely passed through the bull’s chest. A hard-kicking magnum would have added nothing to the proceedings.

Our outfitter confessed that of the more than 70 moose he’s shot over his lifetime more than half fell to his .30-30, which is about as far as you can get in a big-game chambering from the .338 Win. Mag.

And, not to beat a dead bull here, our Scandinavian sporting brethren kill a godawful number of moose each year with their beloved 6.5×55 Swede. The moose don’t seem to know that those bullets aren’t supposed to turn their lights out.

The ’06 is old and boring, but I can’t find any way to justify it not being included in this list. It has taken an unimaginable number of moose and continues to do so. I don’t always abide by the “what worked for grandpa” theory, but in this case, I do. You can find ammo virtually anywhere, and it flat-out gets the job done. In the north country, where moose live, you want a versatile rifle, so you might as well pair it with the ultimate all-around cartridge.

Yes, you are reading this correctly. Some might tell you that the .243 will simply bounce off a moose’s ribs. Many don’t even take it into consideration for deer. However, it’s another of those quiet cartridges, and a favorite of many Alaska natives, that has put moose down for decades. In fact, it is still the go-to “big” rifle for many. Bullet selection is important: you want one that will hold together and penetrate well. The .243 is more than capable, and a great choice for young, smaller-framed, or recoil-sensitive shooters.

Much like the .30-06, the .270 Winchester is an all-around workhorse. There is nothing flashy about it, but flash doesn’t kill big bulls. Known as an ideal cartridge for medium-sized game, the .270 will still get the job done plenty well on a moose. It doesn’t garner much attraction from today’s tinkerers and cartridge snobs, but it’s just another one of those cartridges that fits the bill for someone who only wants one big-game rifle. You likely won’t be dropping a bull where he stands, but usually that’s not how moose go down anyway—regardless of cartridge.

The ultra-popular 6.5 Creedmoor may not be on everyone’s top moose rifles list, but it’s on mine. Aside from being extremely shootable and accurate, here’s why I like it: The 6.5×55 Swede has a long, successful history of dropping moose in Sweden for decades. In fact, the Swede would be on this list, but the reality is, the Creedmoor has become much more widely available and is a touch faster than the Swede, depending on who’s doing the loading.

It’s arguable that the .308 and .30-06 should be an either-or matter, but for me, they both belong here. Much like its predecessor, there isn’t too much to say about the .308 that hasn’t already been said. With modern components, it can perform pretty close to what the ought-six always was, and puts meat away just as well as it ever did. Frankly, anyone who tells you it lacks the wallop to get the job done doesn’t know what they’re talking about. I know of a lot of moose, and even several Kodiak bears, that met their end quickly with the .308.

For many folks, we’re just now getting to what they might consider the bare minimum for moose. The .300 WM has firmly established itself as a fine cartridge for moose (and anything else on this continent). I would wager that for folks living in the more populated areas of Alaska, this might even beat the ’06 in actual field use. To get the most of it, I’d recommend using 190-grain or heavier bullets. Below that, you aren’t gaining much over the .30-06. The last moose I took fell to a single shot from a .300 WM at 400 yards, which is good enough for me.

I personally find the .338 to be a bit of an “in-between” cartridge, that can’t make up its mind whether it wants to be a “normal” rifle, or a real heavy hitter. I can’t argue that it hasn’t found use in abundance as an all-around Alaskan rifle, but I feel it’s overkill for many things, and not quite in the ballpark of other preferable brown-bear stoppers. For moose, however, it does a fantastic job, and it does that job year after year. As far as magnums go, you’ll also typically find no shortage of .338 WM ammo in any sporting goods store on the edge of moose country.

The 7mm is another American staple cartridge. It’s been around a long time, and everyone knows about it. As with many of these classic cartridges, that means they’ve proven themselves. There are several great cartridges offered in 7mm (and some of those will out-perform the Rem. Mag.), ammo is everywhere, and if my father-in-law’s old 7mm named “Thumpy” could talk, it could tell about more moose put on the meat pole than most people could fathom.

If you feel the need for speed, you’re in good shape with this cartridge. This is the fastest production 6.5 cartridge on the market. I don’t usually get too balled up in all of that, but for a reasonably light-recoiling magnum that will get business done in a hurry, I’ve been very impressed. It will get your barrel smoking, but it’s a very accurate cartridge and, speaking from personal experience, it will blow through and kill a moose’s vitals at 500 yards as well as anything out there.

We finally may be getting to what most people (who don’t know any better) would consider adequate for moose. Frankly, this much cartridge is unnecessary. However, if you are bound and determined to have a rifle that will put almost anything on the planet down with authority, this is your huckleberry. You may wonder why the H&H doesn’t hold this spot. There are certainly strong and valid arguments that it should, but this gets the edge for me because it not only edges out the H&H in performance slightly, but it will fit in a standard long action. Just be sure you don’t get your face too close to the scope before you touch one off on that bull!