It might sound crazy, but these two popular hunting cartridges have more in common than you think. Before you buy your next rifle, see how they compare 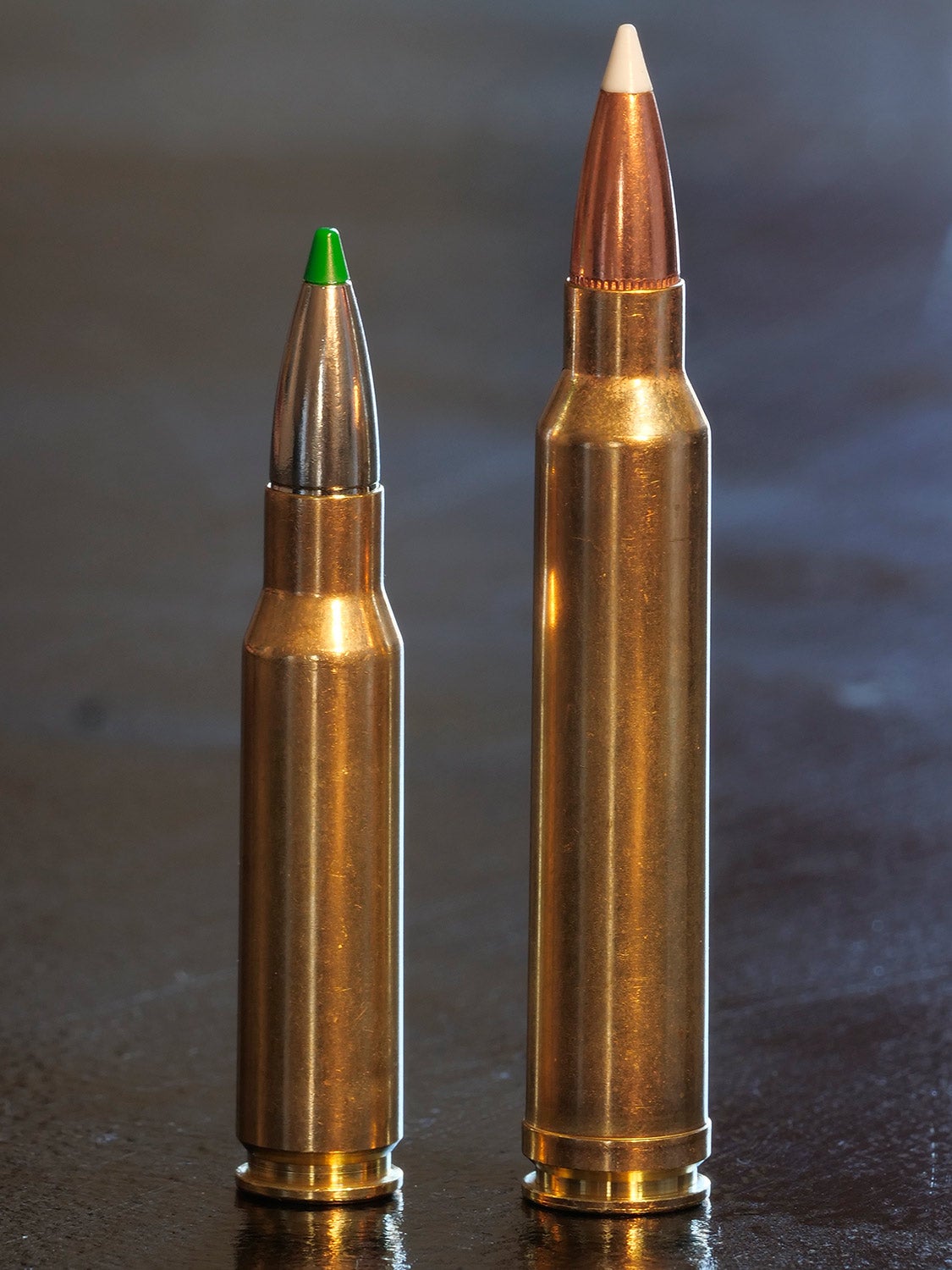 Comparing the short-action .308 Winchester to the long-action, belted .300 Winchester Magnum will raise howls of “apples and oranges” from some readers. But we’re not tasting fruit here. We’re trying to understand how two different cartridges propel the same diameter bullets of the same weight in order to engage targets or game animals. Both can be used for each scenario, so let’s compare!

Despite their size differences, both the little .308 Winchester and the big .300 Winchester Magnum shoot bullets .308 inches in diameter. This is the all-American bore size—.30 caliber —made famous by the .30-30 Winchester of 1894 followed by the even more famous .30-06 of 1906, the .300 Savage of 1920, and the .300 Weatherby Magnum of—surprise—1944. Yes, the larger, faster, more powerful Weatherby Magnum beat the .300 Winchester to the magnum punch by a solid 19 years. But, the full magnum-length Weatherby was proprietary and expensive while the Winchester was engineered to fit affordable, standard-length-action rifles common in the U.S. Winchester allowed any and all ammo makers to load their new .300 magnum, too. The result was an immediate success as American hunters scrambled to own and hunt with one of these new, powerful, manly rifles. (Hey, it was 1963. John Wayne was in his prime, and neither the Beatles nor the hippies had even shown up yet.)

The .30-06 Springfield is central to this comparison because it not only falls between the .308 and .300 Win. Mag. in power, but is essentially the parent of the .308 Win. While some historians insist Winchester engineers worked from the .300 Savage to make the .308, a careful measurement of rim, head, and body diameters shows a clear connection to the .30-06. Arthur Savage probably used the .30-06 when developing his .300 anyway.

Because of the common dimensions of the .308 Win. and .30-06, many refer to the .308 as the .30-06 Short or, more derisively, the “.30-Not-Six.” Such teasing raises a legitimate question: Why would Winchester build a new hunting cartridge that was weaker than the already widely used and respected .30-06? Doesn’t cartridge development push toward higher performance?

Well, yes. But performance is not always about velocity and power. The .308’s performance advantage is efficiency. Because its overall length is a half inch shorter than the .30-06, it can be run through shorter, lighter, faster-cycling actions. Additionally, more cartridges can be carried by an individual, a truck, or a plane. You see, Winchester created the .308 in an effort to have it adopted as the new U.S. military cartridge. They succeeded, but only in 1954, two years after they’d released it as a civilian hunting round. NATO also adopted the .308 Winchester, calling it the 7.62x51mm NATO. It was chambered in the new M14 U.S. Service Rifle in 1957 and saw duty in Korea and Vietnam, with soldiers undoubtedly appreciating its lighter recoil.

Of course, the shorter .308 case holds less powder than the longer .30-06 and suffers accordingly, but not by much. It gives up about 100 fps to the 06 when both fire 150-grain bullets. Few fairly-struck big game animals have lived to notice the difference. But load up a 180-grain slug, and the .30-06 begins to pull away, besting the .308 by 200 to 250 fps. But most American big game hunters in the mid-20th century were pursuing whitetails, mule deer and pronghorns. For those, a 150-grain bullet at 2,700 to 2,800 fps provided plenty of reach and power without punishing recoil. It still does. And today’s premium bullets, including 165 to 180-grain models, make it more effective than ever.

Winchester obviously paddled a different river with their .300 Win. Mag. In a bid to capture America’s “bigger and faster” ethos, they went to the same H&H belted magnum case Weatherby was using. Actually, Winchester had already used this case in 1956 to create the .458 Win. Mag. They went to that well again to build the .338 Win. Mag. and .264 Win. Mag. in 1958. All three fit standard-length actions, but none would ever approach the popularity of the belatedly released .300 version. With its fatter case, the new .300 enclosed enough powder to drive a 150-grain bullet 300 fps faster than the .30-06 and 400 fps faster than the .308. Shooters paid the price in dollars at the pump and recoil at the shoulder, but they manned up and took it, many of them thinking the belt around the head was needed to contain the fearful pressures generated within. In reality, the belt was an unnecessary artifact needed for headspacing on the sloped shoulders of the original H&H cartridges. The 25-degree angle of the .300 Win. Mag. shoulder made the belt superfluous, but it was such an effective marketing tool, Winchester wisely retained it.

Odd though it seems, both the .300 Win. Mag. and .308 Win. grew steadily in popularity. With its power and flat trajectory, the .300 built a reputation as a world beater. Shooters could opt for the flat trajectory of a 150-grain bullet to reach a distant mule deer at 3,300 fps or suffer the heavy punch of a 220-grain round nose at 2,700 fps to calm down an agitated brown bear. From 10-pound dik-dik to 1,800-pound Lord Derby eland, no African game was out of reach.

Meanwhile, the .308 won converts for its mild recoil, extreme accuracy, affordability, and more than adequate killing power. It proved capable of terminating anything the old .30-06 could with less recoil. Mandatory use and training in the military introduced thousands of new shooters to this round, and on target ranges, it began winning everything.

Given that history, let’s compare these two side-by-side in several categories important to hunters and sport shooters.

As you might guess, the .308 minimizes recoil, but look at how much. It nearly cuts it in half. This can contribute mightily to accurate shooting. Reduced recoil is likely a significant reason for the .308 Winchester’s reputation for accuracy. Here are recoil energies and velocities in 8-pound rifles with two popular bullet weights.

We’ll call this a tie. Virtually every rifle maker chambers for both of these popular rounds, especially in bolt actions, but also in lever-actions, autoloaders, single shots, and pumps. You’ll find precision target rifles more often chambered in .308 Win., but plenty of sniper-style rifles are wrapped around the .300 Win. Mag. The .300’s ability to drive heavy, high B.C. bullets at good velocities makes it a serious contender at extreme ranges. The .308 Win. begins petering out after 700 yards or so. Light hunting rifles are easier to find in .308 and easier to shoot, and barrels will last a lot longer.

Read Next: The Best .308 Hunting Rifles

You might imagine the .308 wins this easily, given all the tactical, target, sniper, and precision rifles chambered for it, but the .300 Win. Mag. has won plenty of 1,000-yard target competitions. Rumors about the .300’s belt compromising its accuracy potential are exaggerated out of proportion to reality. In a hunting rifle especially, you needn’t worry about .300 Win. Mag. precision. I’ve worked with several .300s that shot honest 1/2 MOA. The .308, thanks to lots of precision-built factory match ammunition and rifles, long barrel life, and mild recoil, is the best option for high volume target shooting.

Even though more modern designs have bested both of these cartridges, they more than hold their own in today’s shooting world. Improved bullets have made them more effective on game than ever before. Standard twist rates of 1 in 10 inches stabilize most modern, high B.C. bullets, too. Most shooters choose the .308 Win. if they mainly target shoot and hunt whitetail-sized game. The .300 Win. Mag. is more popular with hunters who target shoot at extreme range and often hunt elk, moose, big bears and large African plains game. Both the .308 Winchester and .300 Winchester Magnum are poised to continue long and successful careers.