Why the .308 Winchester Will Never Die

The good old .308 Winchester is still one of the best (and most popular) hunting cartridges around. Here's why 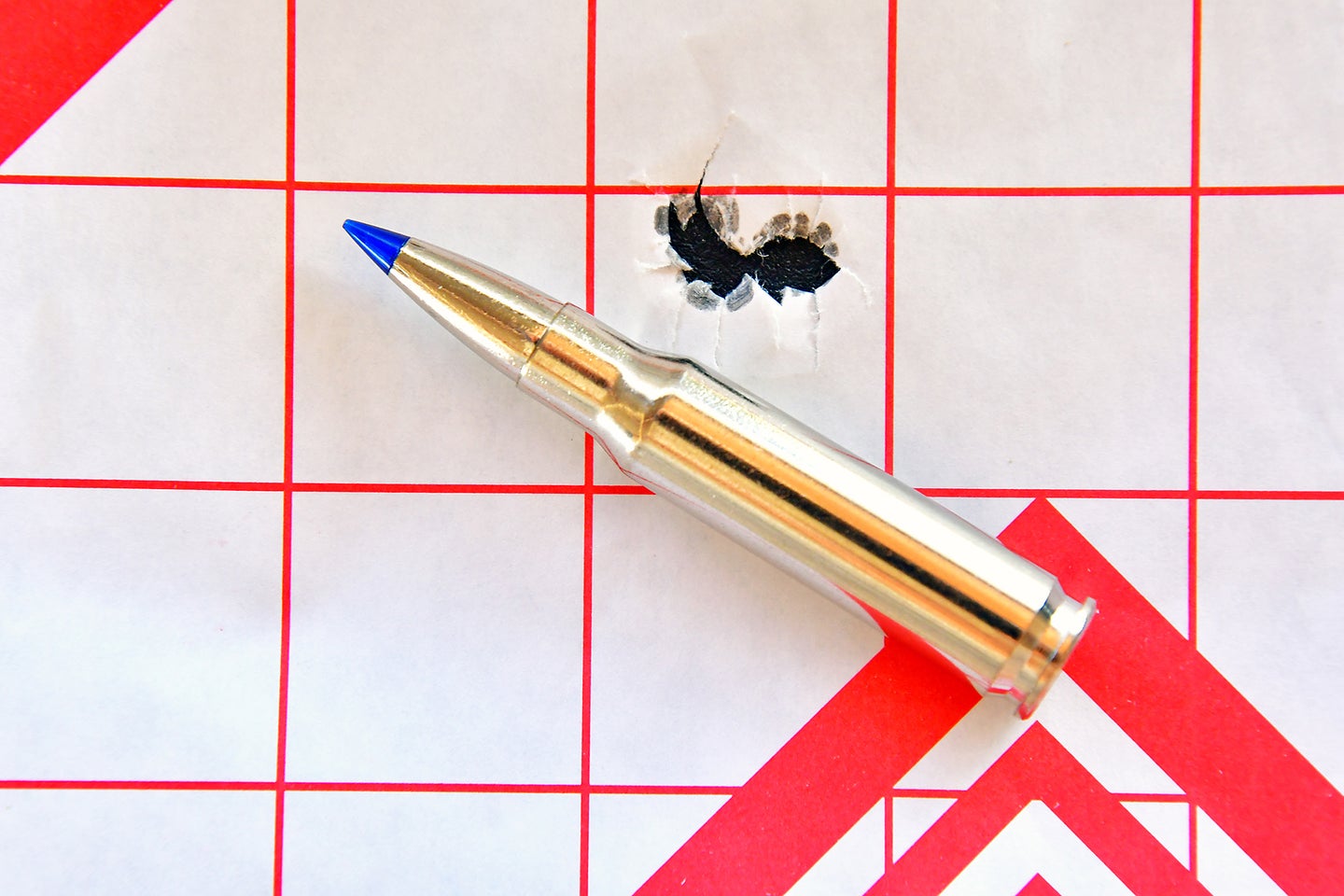 Not long after the 6.5 Creedmoor arrived on the scene, some observers called it the “.308 Win. killer.” Things haven’t quite gone that way. The 6.5 Creedmoor has become immensely popular, and rightly so, but any notion that it would cause the demise of the .308 Winchester was untrue then and is untrue today. The .308 Win. remains a highly popular cartridge globally, and it likely will be for as long as centerfire rifle cartridges are made.

But even so, it’s easy to neglect the old .308 for more interesting options. There was a stretch of time when I didn’t shoot .308 Winchester very often because I was busy testing all the flashy new cartridges that have been introduced recently. The .308 Win. is neither flashy nor new, and I suppose I had come to view the cartridge as being, well, somewhat boring. It was like an old plow horse that just kept plodding up and down the field, doing its job with monotonous reliability. With the wisdom of years, I have come to view that as a virtue.

That’s one reason I set out to rediscover the .308 this year by testing more rifles chambered for the cartridge and hunting with it more often. First, while hunting in northern Alberta with a Mossberg Patriot rifle chambered in .308 Winchester, I shot the biggest black bear of my life—that’s noteworthy considering I already had one in the record book. Thirty minutes after shooting that bear, which measured 7 feet, 4 inches from nose to tail, I shot an even bigger bear that measured 7 feet, 7 inches. Each bear dropped to one shot using Hornady’s American Whitetail load with a 150-grain InterLock bullet.

More recently, I shot a beautiful 200-pound fallow deer in Texas using the new Benelli BE.S.T. Lupo rifle and Federal’s 175-grain Terminal Ascent .308 Win. load. I shot the buck quartering on, and the bullet smashed through the big shoulder bones and penetrated 30 inches before coming to rest, intact and perfectly mushroomed, in the offside hide. The buck ran 12 yards and dropped. Such impressive performance is common with .308 Winchester, especially when loaded with newer premium bullets that deliver great terminal performance near and far.

I’m not alone in my affection for the .308 Win., and it turns out a quiet majority of hunters still use and love the cartridge despite its oldness. Here are nine reasons the .308 isn’t going away anytime soon.

The military version of the .308 Win, the 7.62X51mm NATO, was developed in the 1950s and used with the M14 rifle, M60 machine gun and many other U.S. and allied-nation weapons. The M14 was replaced by the M16 during the Vietnam War, but the rifle continued to see service long afterward. I had experience with the M14 while serving in the Navy off Vietnam during the closing days of the war. We still had M14s aboard, and it was the first military rifle I learned to shoot. It left a lasting impression.

While the 7.62X51mm NATO continues to see military service, Winchester long ago saw a commercial market for the cartridge and introduced it to hunters as the .308 Win. in 1952, two years before NATO’s adoption of the 7.62X51. Chambered for the popular Model 70 rifle and others, the cartridge quickly gained a global following. Name the job – hunting, target shooting, or military and police sniping – and you’ll find the .308 Win. gainfully employed.

Just as the .30-06 Springfield was used as a military cartridge and enjoyed great success as a hunting round, so, too, has the .308 Win. There’s a certain poetic symmetry in this because the .308 Win. is, for all practical purposes, a shortened .30-06. The .30-06 can launch bullets a little faster, but the 308 Winchester can do just about everything the .30-06 can do in the field, using less powder and producing less recoil, while conveying the benefits of a cartridge that fits in a short action. It is, in some ways, a more efficient cartridge, and that’s just one of many attributes that helped make the .308 so popular.

How can that be when so many new cartridges have arrived in recent years that deliver superior ballistic performance? Ammo makers say there are several reasons for this. In addition to being a very versatile round for hunters pursuing deer, elk and other big game, the .308 is still a favorite for target shooters and it’s very popular for use in semi-automatic rifles for hog hunting and personal protection to some extent. It has for decades been the one of the most widely used sniper cartridges by militaries and law enforcement, and while other cartridges have made inroads into that market, the .308 Win. arguably remains the world’s most popular short-action rifle cartridge with a bullet diameter larger than 223. Those who predicted the demise of the .308 weren’t just premature. They were wrong.

The .308 Win. long ago earned a reputation for delivering good accuracy in the field and at the target range. Of all the rifles chambered in .308 Winchester that I’ve tested this year, most could print their best 3-shot group at a half-inch or better with ammo they liked. OL Staff Writer Tyler Freel did a massive test on both budget and mid-priced hunting rifles this year and shot 217 groups with 15 different loads through a variety of rifles in .308. With 5-shot groups, the most accurate hunting rifles averaged between 1.1-inch and 1.3-inch groups. Mind you, that was with hunting ammo and hunting rifles. Match-grade ammo fired in match-grade rifles can do better.

Although several other cartridges are favored for some forms of competitive shooting, the .308 Win. is still used in PALMA shooting, and it’s one of two choices allowed in F-TR class matches. According to some sources, it was the 308 Win. that reportedly caused the NRA at one time to reduce the size of targets used in some competitions to reduce the number of ties.

You’ll hard-pressed to find many other factory cartridges loaded with as many different bullet weights and styles as the .308 Winchester. Current listed offerings, with bullets in the 110-grain to 185-grain range, demonstrate that there’s a .308 load to suit every preference and accomplish most any task.

Handloaders know that the .308 Winchester is not difficult to load for, and there’s a wide array of available bullet weights and styles.

The .308 Win. is more than adequate for most North American game at normal hunting distances. It’s a dandy deer cartridge. It’s routinely used to take elk and moose, and it’s hard to imagine a more perfect all-purpose black bear cartridge. It’s surprisingly popular in parts of Europe. In Africa, the .308 Winchester has long been used by hunters to take every species of antelope, up to and including eland. (Freel used a .308 and Norma 180-grain Bondstrike ammo with great success on his 2019 plains game hunt in South Africa). In 7.62X51 NATO form, it has even been used by poachers to kill elephants.

The .308 Win. does have its limitations. It’s not as fast recent hotrods like the 28 Nosler and it’s not as powerful as big boomers like the .338 Win. Mag. Its bullets don’t have as high of a ballistic coefficients as those of the new, trendier cartridges. But most hunters need not worry about any of that. At 400 yards a .308 Terminal Ascent bullet (175 grains) is still delivering 1,503 foot pounds of energy, which is plenty for North American game. And that is, of course, more energy than the 6.5 Creedmoor bullet (130 grains) delivers at the same distance.

You Can Find Ammo

There are few places in the world where ammunition is sold where you can’t find .308 Winchester. That can’t be said of many other cartridges. The 308 Win./7.62X51 NATO  is a long-established, global standard. Even at the peak of the recent ammunition shortage, when the most popular hunting cartridges were all but impossible to find, it was easier to find .308 than other popular rounds like the 6.5 Creedmoor. I suspect that was partly because there was simply so much of it in circulation, in so many different loadings, before the shortage arrived in full force. For a while, things got so bad that even the .308 Win. disappeared in some areas, but it was one of the first popular hunting cartridges to rebound and trickle back onto retailers’ shelves. I’ve recently found .308 Win. ammo at every significant retailer I’ve visited. This is not the case for some hunting loads, like the .300 Win. Mag.

Everyone Chambers for it

Therer are good mid-priced rifles, like the Weatherby Vanguard and a number of Howa models, plus some of the more affordable Bergara models, as well as the Kimber Hunter, Tikka T3X, and Savage 110.

You’ll find no shortage of more expensive high-quality rifles chambered in .308 Win. These include versions of the Ruger Hawkeye, Browning X-Bolt, Winchester Model 70, Bergara Canyon, Benelli Lupo, and others. Many custom gun makers will happily build you a rifle in .308, if you wish.

You can also find single-shot rifles such as the Henry Single Shot, and lever-action rifles like the Browning BLR, in .308 Win. I shot my first big trophy wild boar with a .308 Browning BLR decades ago. Sadly, that gun is no longer in my inventory. I don’t remember when or why I parted company with it, but I seriously regret doing so.

Eugene Stoner’s original battle rifle design, which would become the M16, was initially chambered for the 7.62X51 NATO cartridge, the military version of the .308 Win. That AR10 design has been around for more than six decades, and while it nearly went extinct for a time, it has risen from the dead to become a star. That’s partly because it offers lots of room to work with in the receiver, which led to the AR-10 being chambered for a host of cartridges in guns tailored for specific purposes, but the .308 Win. remains the bread-and-butter chambering for the AR-10.

The main drawback of the AR-10 for hunters was the fact that it was heavy, with many guns weighing 8-10 pounds empty with no optic attached. Cutting weight meant cutting barrel lengths and sacrificing velocity. That’s no longer the case. Today, you can find a number of AR-10 rifles weighing well under 8 pounds. A good example is Ruger’s new SFAR (Small-Frame Autoloading Rifle), which packs 308 Winchester punch into a gun nearly identical in size to an AR-15. It weighs just 7.3 pounds with a 20-inch barrel. That puts it on par with many popular bolt-action rifles.

In guns of reasonable weight, recoil of the .308 Winchester won’t rattle your teeth. Recoil increases with lighter rifles and heavier bullets, of course, so some comparisons help put the cartridge’s relatively mild recoil in perspective. A 7.5-pound rifle launching a 150-grain .308 Win. bullet at 2,800 fps produces about 15.8 foot-pounds of recoil energy. That’s just a couple of foot-pounds more than you’ll get from a mild-recoiling 143-grain 6.5 Creedmoor bullet, and it puts the .308 Win. comfortably within the recoil tolerance of a majority of shooters.

In contrast, a heavier 8-pound rifle chambered in .270 Win., firing a 150-grain bullet, delivers 17 foot-pounds of recoil energy, while the same gun shooting a 150-grain .30-06 bullet hits the shoulder with 17.6 foot-pounds of energy. Numbers are likewise higher for the same-weight bullets in cartridges like the 7mm Rem. Mag., 280 Ackley Improved, 300 WSM and 300 Win. Mag. None of these cartridges will make an animal any more dead than a properly placed, well-constructed .308 Win. bullet, and the .308 will produce less recoil in lighter guns than any of these cartridges.

If you want a 30 caliber bullet to impact with accuracy and good energy on target while generating tolerable recoil on your shoulder, the good old .308 Winchester may just be your best choice.