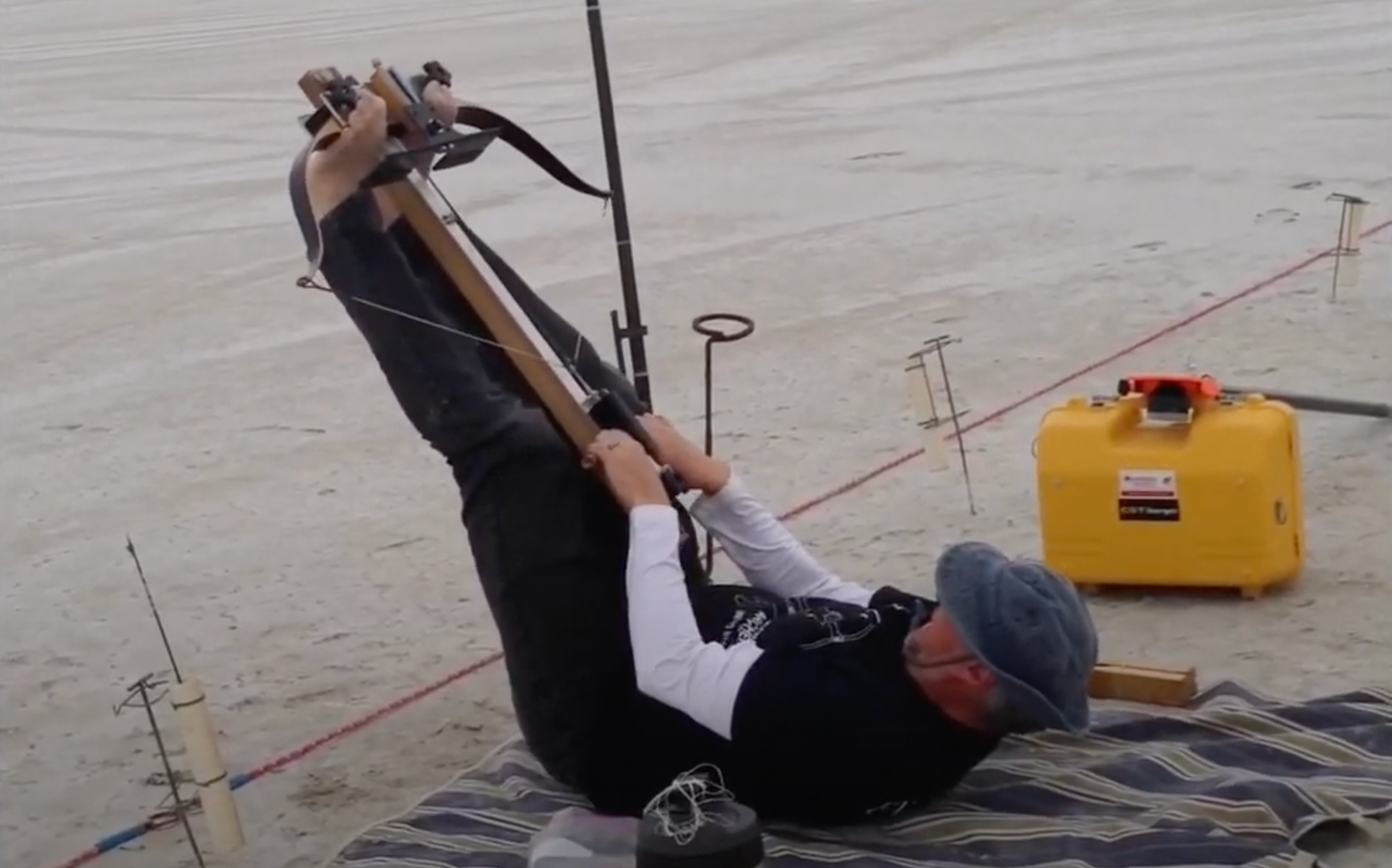 Alan Case has long been on a mission to shoot an arrow farther than anyone has before, and the 55-year-old engineer recently made an attempt at the world record. As reported by Smithsonian Magazine, Case took a trip in his minivan this fall to Smith Creek Dry Lake, an ancient salt flat in central Nevada. He brought his footbow, along with some arrows, tools, and surveying equipment.

Case was joined in his pursuit by 15 or so friends and family members. That attendance pretty well sums up the extent to which the niche sport of “flight archery” has reached the general public. After stretching his muscles all morning by launching practice arrows with his footbow—essentially an overpowered crossbow that is held up by your feet, drawn by your hands, and fired while lying on your back—Case prepared to take a shot at the world record.

That record belongs to Harry Drake, who was a legend in the close-knit world of flight archery. In 1971, Drake launched an arrow 2,028 feet (or 676 yards) using a footbow that he designed and built himself. This is the record that still stands today, and the distance that Case was trying to beat.

Like Drake, Case designs and builds his own footbows at his home workshop in Beaverton, Oregon. Case also makes his own arrows using ultralight carbon fiber rods, stainless steel nocks, and fragments of safety razor blades as fletching. When used together, the ultra-powerful bow and the ultralight arrows make for a dangerous and unpredictable combination.

So when Case finally told his support team of distance-checkers and onlookers that he was ready to take the big shot, the atmosphere was understandably tense. With his back on the shooting blanket and his face pointed toward the sky, he placed his feet in the footbow’s stirrups and both hands on the bowstring. He took a deep breath in, drew, and released the footbow at a 40-degree angle.

What happened next is hard to explain—in part because it all must have happened so quickly. Suffice it to say that Case’s arrow, which would have been traveling at about 800 fps (roughly double the fastest hunting crossbows on the market), did not go farther than a mile.

Instead, the arrow went directly into the top of Case’s right foot, shattering a bone in the process. The bewildered—and now hobbled—archer was taken immediately to a hospital in Fallon, Nevada, where doctors patched him up.

The following day, however, Case returned with a pair of crutches to Smith Creek Dry Lake, where he found and documented one of the practice arrows that he fired before the mishap occurred. The arrow had flown roughly 1,823 yards, or a little more than a mile. So while he achieved his goal of shooting beyond a mile, it didn’t qualify as a world record on a technicality. But Case hasn’t given up just yet—he says he has plans to return to the salt flats when conditions are right.