Here is a list of Jack O'Connor's books, in chronological order by date of publication. 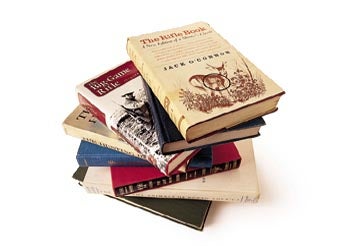 Many of Jack O’Connor’s books incorporated material from his writings in outdoor life; others were original. Some of the works were reprinted several times or appeared in revised, expanded editions. Safari Press Inc. has reprinted many of O’Connor’s original titles. In March 2002, it will publish a 240-page biography titled Jack O’Connor, The Legendary Life of America’s Greatest Gunwriter. A limited edition of the book autographed by the writers, Robert Anderson and Eldon “Buck” Buckner, and by O’Connor’s surviving children (Bradford, Catherine and Caroline) will sell for $85. A regular edition will be available for $29.95. For information, call 800-451-4788 (in California, 714-894-9080) or go to the Web site at www.safaripress.com.

Here is a list of Jack O’Connor’s books, in chronological order by date of publication: **

Boom Town: A Novel of the Southwestern Silver Boom (1938)
**
Game in the Desert (1939) First published by Derrydale Press in a limited edition of 950 numbered copies, this was reprinted in a 1945 trade edition, with a new preface, under the title Hunting in the South West. In 1977, Amwell Press reissued the book in a limited edition of 950 copies. This version reverted to the original title and included a substantial introduction by O’Connor.

The Complete Book of Rifles and Shotguns (1961) An updated excerpt from this book was later published as 7-Lesson Rifle Shooting Course.

Horse and Buggy West: A Boyhood on the Last Frontier (1969) Autobiographical.

**The Last Book: Confessions of an Outdoor Gun Editor (1984) **Published posthumously, this autobiography is at times scathing in its frankness and fascinating for the insight it offers into the world of outdoor writing.