"Breakaways" and other rigs that improve landing succes. 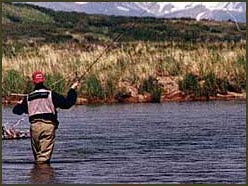 Unless most of your fishing is done in salt water, you’ve probably come to think of floats in two ways: as things to clip to a child’s first spincast outfit, or as precision instruments for serving baits to ultra-selective small fish and signaling you when such fish so much as breathe on the dainty morsel dangling in front of them. But big floats, rugged lines and heavy baits are part of float-fishing, too. They’re used on everything from bass to catfish, stripers to tarpon. Not only can they suspend bait at a desired depth, but in river and tidal currents, floats enable a bottom-bouncing presentation that often triggers fish to strike.

Big floats and strong fish present a problem of hydrodynamics, however. The fish eats the bait, senses resistance from that big float and charges off on a run with your whole float-rig plowing behind like a tractor-pull sled. If you were fishing correctly-especially if you were working a big bait through heavy current-you’d have attached your line both to the upper and lower ends of the float. Such two-point attachment keeps the float in the upright position, where it can signal the slightest bump or nervous bait.

But when it’s tethered to a fleeing fish, a big bridle-rigged float still produces a lot of resistance as it rips through the water. You’d be better off if the float was attached only at the bottom for the run. That would enable its tapered end (you’re not still using a fat, round bobber or hunk of Styrofoam, are you?) to slip easily through the water, preventing the hook from pulling or the line from breaking. Here’s where “breakaway” systems come in handy.

Breakaway rigs allow the line to snap free from the top anchoring point of a float when a fish takes off with the bait. The simplest breakaway rig is a fixed-float system: Thread two silicone bands or surgical rubber tubing on your line and run them up to where you want the float anchored. Normally, on a non-breakaway rig, one band is slipped onto the bottom of the float, one onto the top. For a breakaway, however, use three rings. Jam two bands onto the bottom stem of the float, anchoring the line securely. At the top of the float, fold your line into a “U,” tuck the fold beneath the third silicone band and slip that band over the top of the float, making sure the line running the length of the float is snug. Now, a hard-running fish, or a snap of the rod, will pop the loop of line from beneath the top ring, allowing the float, still firmly anchored only at the lower end by the double rings, to pull through the water with far less resistance. The less line stuffed beneath the top band, the easier the breakaway.

Slip-Float Systems
The utility of surgical tube bands isn’t restricted to fixed-float rigs. When he worked with the Lindy-Little Joe tackle company, float-fishing expert Mick Thill (see Fishing, “Stinkbait vs. Groundbait,” November 1998) introduced something called a float-swivel adapter to the American market. It was the ’60s brainchild of Bill Watson, a champion of English match-fishing (where a three-ouncer is considered a monster). The rig consists of nothing more than a snap swivel and length of rubber tubing. One swivel eye is jammed into the tubing, which, in turn, is slid onto the lower stem of a float, the other swings free from the opposite end of the tubing, acting as the “eye” through which the line runs. Float-swivel adapters were originally intended to give small, ultra-sensitive floats the ability to be fished slip-style, as well as to facilitate a quick change in float size.

With a little modifying, swivel adapters also offer a good breakaway option: Run the line through a swivel adapter attached to the bottom of a float. Using a fine, round-tipped tool (a steady hand and a small drill bit will work nicely), make a tiny hole just below the top of the float. Whittle a matchstick (or a toothpick, if it’s a micro-floatt) down to a point and stick it into the hole you made. Now take another float-swivel adapter, slip the rubber tubing end over the matchstick and you’re done.

When a fish runs, the matchstick will pop from the float and allow the float to slide smoothly through the water. You’ll have to tinker to get the breakaway tension you want, and if you’re using a toothpick you’ll have to wedge another piece of toothpick into the tubing to make it fit. Another tip: If you’re using light line, remove the snap from the float-swivel adapter and run your line through the barrel-swivel eye.

At the risk of all this tinkering turning you off, here’s yet another option: Some floats come already equipped with a fixed eye near the top. If the eye is big enough, simply slip the tubing of a float-swivel adapter over it and forget about fooling with toothpicks or matchsticks. How’s that for adding a little American convenience to an Old World fishing method?