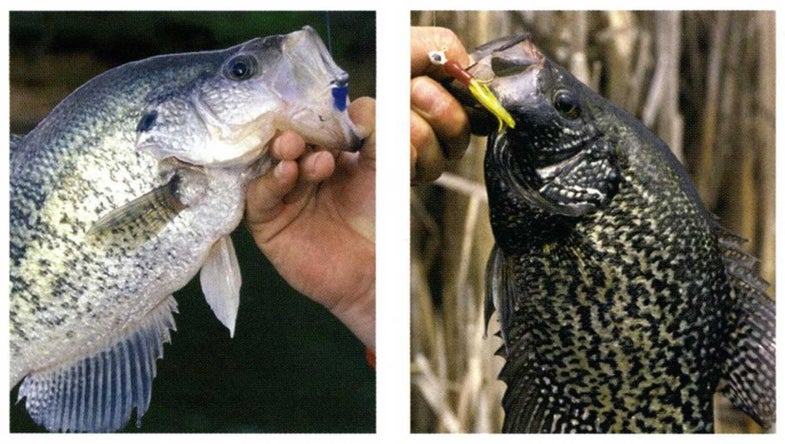 Left: Except when they spawn, white crappies favor deep water, especially where there is cover. Right: Black crappies like the shallows and are sometimes overlooked by anglers who fish offshore because they think all crappies have moved out after the spring spawn. Mike Barlow / Windigo Images (left); Judd Cooney / Windigo Images
SHARE

Catching crappies can be a springtime coin toss. Go fishing during the general time frame when crappies are spawning in the shallows-or are just about to-and they’ll take anything that looks like a live minnow. Either the fish are there or they’re not, and timing the bite is usually a matter of luck and word of mouth. But there’s a better way to ensure success.

Like all other fish, crappies are influenced by water temperature, which triggers their seasonal movements. Anglers who recognize the relationship between temperature and location are almost always in the right place at the right time to catch papermouths.

In 2003, a telemetry study at Kentucky Lake yielded useful and surprising information about crappie movements based on water temperature changes. Kentucky Department of Fish and Wildlife Resources biologist Paul Rister shared the results of the study with Outdoor Life. The conclusions we can draw from the Kentucky Lake study are a useful guide to fishing for crappies at many highland impoundments throughout the South.

We also spoke with Minnesota fisheries biologist Mike McInerny to compare notes and determine what information from the Kentucky Lake study would be useful for crappie fishermen in the Midwest. Here’s a closer look at how water temperature influences both Southern and Northern crappie movements.

The Southern Model
According to Rister, during the winter the water temperature at Kentucky Lake (and several other Southern reservoirs) usually hovers near 40 degrees, especially along the main river channels. During these cold-water periods crappies will hold near secondary river channels.

“At Kentucky Lake the main river channel is the old Tennessee River. Crappies gravitate to the creeks that once fed the main river,” says Rister. “These secondary channels can reach up into the shallower embayments.”

Near the main river channel the secondary channels are as deep as 30 feet. Farther back, the secondary channels might be only 10 feet deep. Crappies will suspend near brush along the secondary channel. The telemetry studies showed two distinct populations of cold-water crappies: those that remain close to the main channel in the 30-foot depths and others that stay in the 10-foot depths closer to the back of bays. Rister can’t positively say why the groups occupy their respective winter niches. It might be a natural predilection related to where the crappies were spawned. There is little movement or mixing of the two groups; they’re homebodies.

What does this mean to crappie anglers? Once you locate a school of crappies at some point along a secondary channel you will likely find that school using the same spot throughout the winter, until rising average temperatures and longer days trigger movement toward the shallows. In this early pre-spawn period, try spider- rigging multiple poles with tube jigs of different colors. Set the jigs at different depths and use a wind sock to drift along the secondary channel.

By March, most Southern crappie waters have warmed into the 50s. When the water temperature is 50 to 56 degrees, most crappies will be found staging on flats ranging from 6 to 15 feet deep.

“Whenever anglers start catching fish shallow they often think the fish must be spawning. Actually they’re in the pre-spawn feeding frenzy,” explains Rister. “During this time anglers should look for flats with baitfish. Structure is not as important as forage.”

Spider rigs, combined with wind socks, are still a great fish finder. Simply adjust line depths and drift across the flats until you pinpoint schools of hungry crappies.

To explore bank cover, minnows and jigs are hard to beat because they can be fished vertically. In more open water, try small in-line or safety-pin-style spinnerbaits to locate crappies that are near submerged cover.

Summertime Myths
Most anglers believe that after crappies spawn they move back out to the river channels where they suspend and become extremely difficult to catch. But the Kentucky Lake telemetry study suggests that’s not the case.

In 2003 the study focused on Blood Creek, the largest secondary channel on the Kentucky portion of Kentucky Lake. The study was inspired by several complaints filtering in from crappie anglers in the area. Catches were down, yet the state maintained that Kentucky Lake harbored its largest populations of crappies ever. So what was happening?

What biologists found through trap-net studies was that black crappies, which prior to 1997 made up only 18 percent of the catch, were by 2003 significantly outnumbering the whites. Since 1997, black crappies made up 72 percent of the trap net catch, but anglers caught no more than they ever did. While the crappie population was increasing overall-mostly due to an explosion of black crappies-anglers were not cashing in.

The study proved that black crappies remained shallow long after the spawn, while white crappies spawned and quickly migrated offshore. Rister notes many of the black crappies were still shallow in early July, even though the water temperature was 80 degrees.

Rister speculates that crappie anglers were vacating shallow water to chase white crappies, as they always had. In recent years the diminishing white crappie population became harder to find, however, and consequently were more difficult to catch. Fishing shallow for black crappies, even in June and July, could solve the problem of diminished harvests for crappie fishermen at Kentucky Lake, and wherever else the species is dominant or thriving.

“If our transmitters had lasted a month or two longer we would have probably seen the blacks move out to the flats in five to six feet of water and pretty much stay there,” says Rister.

The biologist also notes that brush is important because the summertime blacks are habitat-oriented, especially in shallow water. In the fall, black crappies can still be found fairly shallow. While the Kentucky Department of Fish and Wildlife Resources hasn’t conducted any autumn telemetry studies, researchers have set out nets during that period for population surveys. Most of the nets are set in 5 to 15 feet of water during October. Rister says the number of black crappies caught in these nets indicates that they are still using shallow water.

Meanwhile, Up North
Not surprisingly, Northern crappies spend much of their time in deep water during winter. In lakes that are frozen over, the water temperature just below the ice hovers in the low 30s. Twenty to 30 feet down, however, the water might be as warm as 39 degrees. Minnesota fisheries biologist Mike McInerny, who is also a crappie angler, says the fish do not seem to be structure-oriented and suspend in open water while waiting out winter. Then crappies begin moving shallow when water temperatures warm.

“I have noticed that we start catching more crappies in our trap nets in the spring once the water temperature reaches about fifty degrees,” says McInerny. “Most of our trap nets are set in less than six feet of water.”

Cover is not as important to Midwestern crappies in early spring. Instead, anglers should focus on places where the water tends to be warmest-such as the shallows along northeastern banks that are warmed by the sun.

According to McInerny, there’s some evidence that suggests the length of day might influence when Northern crappies begin to spawn. In Minnesota and many other northern states (South Dakota, Michigan, Wisconsin, and New York among them), crappies generally begin to spawn in mid-May. The spawn peaks in early June.

Since spring weather in the northern tier of states is unpredictable, there’s no specific trigger point for water temperature. McInerny says crappies can be found spawning in water ranging anywhere from 57 to 75 degrees. As a general rule, expect crappies to spawn in cooler water when air temperatures are cooler than normal for the season. The opposite is true of springs in warmer years.

The Right Cover
Crappies will build nests from 2 to 19 feet deep, depending on the water clarity and species. At southern Minnesota’s Dog Lake, which McInerny describes as turbid, white crappies spawn in less than 2 feet of water, while the blacks can be found in 4 to 5 feet. In clearer water, crappies will nest much deeper, especially black crappies.

“One study in Minnesota showed that black crappies chose nest sites near emergent vegetation like bulrush and avoided sites with a lot of submergent aquatic vegetation,” says McInerny.

That’s easy to explain. Bulrush, along with wood cover and other stemmed vegetation, provides protection from heavy wind and wave action. Stem cover also makes it easier for males to defend the nests. In submergent weeds, smaller fish can hide and raid crappie nests for the eggs.

After spawning, northern crappies can often be found resting along the outside edges of deeper weed beds. At Dog Lake, the deepest weed beds are found in less than 10 feet of water due to turbidity. When he fishes for crappies, McInerny systematically probes the outer edge of such weed beds. “I hit each stem,” he says.

During the low-light periods, such as dawn or dusk, crappies will vacate their aquatic shelters to feed. Some will feed along shallow banks, usually by chasing small baitfish.

Other crappies will move out to deeper water to feed on chaoborus, tiny aquatic insects related to mosquitos. At Dog Lake, chaoborus inhabit sediment located in 20 to 27 feet of water. According to McInerny, crappies will suspend above the sediment in 15 feet of water, which is usually where the thermocline sets up in most northern lakes. As the chaoborus emerge and float toward the surface, crappies suck in an easy meal.

In most northern lakes crappies will remain in 15 feet of water or shallower until water temperatures fall below 50 degrees in autumn. Then the crappies search out their winter holes and prepare to begin the cycle again.