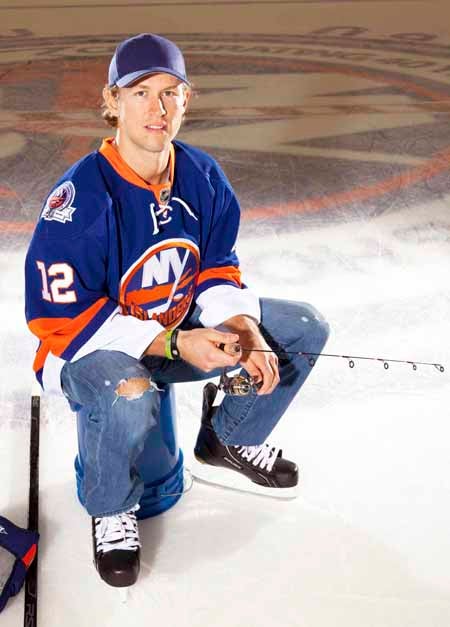 ▶ It all started with my dad and grandpa. They’re both big outdoorsmen. I’m from Bowmanville, Ontario, Canada. It’s a small city, but my grandparents lived in the country, and my aunt and uncle lived on a lake. When I would go to their places in the summer, I would always bring my fishing pole. So, I just kind of got into it from a very early age.

▶ I’ve always fished for bass. That’s what I know best and that’s what I prefer to fish for.

▶ I’ve been trying more and more to get into muskie fishing. It’s a little more time-consuming. Usually when I go out, I just want to catch fish–I don’t have the patience for muskies.

▶ We’re really lucky in Ontario–there are so many lakes and so many fish, it’s really tough to leave it when you know you can have so much success close to home.

▶ I bought a cottage two summers ago on Buckhorn Lake [in Ontario]. I mostly just fish with friends, as well as my brother and dad. But [Islanders teammate] Michael Haley came up last year for a day to fish with me. I’m sure if I could get other guys on the team out to my cottage and catching some fish, they’d be hooked.

▶ I usually leave the bass cooking to my dad. He’s a pretty good cook with the fish, and he’s really good at skinning them as well. We usually have a couple of big fish fries every summer.

▶ I’ve got pretty much anything you can think of [in my tackle box]. When I bought my cottage, I went to the Bass Pro Shops store and loaded up on everything for bass, walleyes, and muskies. Pretty much all different types of lures. My favorite way to fish is topwater, so I have a lot of topwater lures.

▶ I’m so busy with hockey, I pretty much have to leave fishing to the off-season. But I do always have my rod and tackle box with me, so it would be easy to walk over to some of the bass ponds near my house [in New York]. I’m sure I’ll do it at some point. I did go out and buy a New York State fishing license, so I can fish there whenever.

▶ Last summer I went fishing with some friends after a thunderstorm. The fish were hammering our topwaters. We caught more than 30 fish in an hour and a half. I caught a 5-pound bass that day, which was the biggest bass I caught all summer. It was the greatest day of fishing we had all season. Seemed like the fish were biting everything.