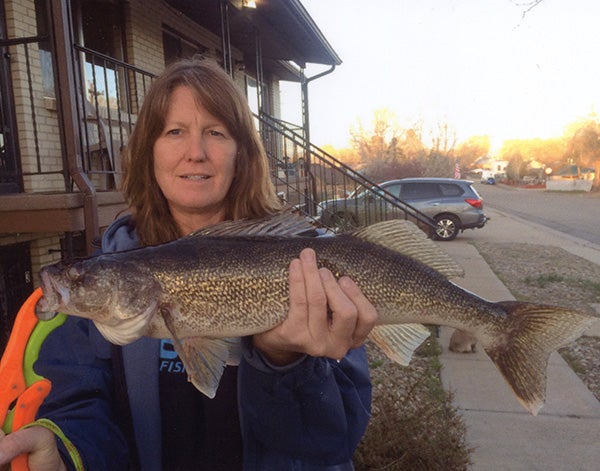 For an angler to catch a bonafide, certified International Game Fish Association record is nearly akin to climbing Mt. Everest. It’s not possible for everyone, and not just anyone is up to the challenge. Kelly Jo Hall of Cortez, Colorado, has not only climbed the IGFA mountain, but she’s done it nine times. What might be even more impressive is that most of her world-record fish have been caught from shore. She’s a superstar in the eyes of anglers who yearn for a record-book catch.

Hall’s latest world-record fish—and to her, the most special—is the 5-pound, 4-ounce smallmouth bass she caught at Colorado’s Puett Reservoir on May 16. This claims the 4-pound line class Women’s IGFA world-record for the species for Hall.

“It was bigger than I thought, a diamond of a fish,” she told The Journal. “I’m real proud to get the world record on it, especially since it was from a local [Colorado] lake. I’ve got a 350-pound marlin, but that smallmouth bass from Puett is my favorite.”

Hall reportedly spotted the bass’ shadow near a rock, switched lures to a plastic worm, and cast to the fish. The smallmouth struck, fought doggedly, and then was reeled in. After the fish was officially weighed, measured, and photographed, Hall released it into the reservoir.

Read Next: The Largest Migration on Earth Happens in the Ocean, Every Single Night

Her smallmouth bass catch application was submitted to IGFA, then recently accepted by the world-record organization. The IGFA also just approved Hall’s catch of a 2-pound, 6-ounce striped bass caught on Lake Powell this April. It is now the 2-pound line class Ladies IGFA world record.

With two of her total nine world-record catches retired, Hall now holds seven world records in women’s freshwater fishing under the IFGA. The two now-retired records were trout caught while trolling on a boat at Ground Hog Reservoir in Colorado; all her other records were caught from shore. She also has four pending world records for tiger musky, in which she improved the 4-pound test, 6-pound test, and 8-pound test records, in addition to establishing a new 12 pound test record. These will soon be verified by IGFA, according to her partner Joseph Crosby. She practices catch and release, and she says she’ll begin targeting saltwater IGFA records next.