Spring rains and runoffs might mess up your fishing hole temporarily, but these tactics will keep you from getting skunked. 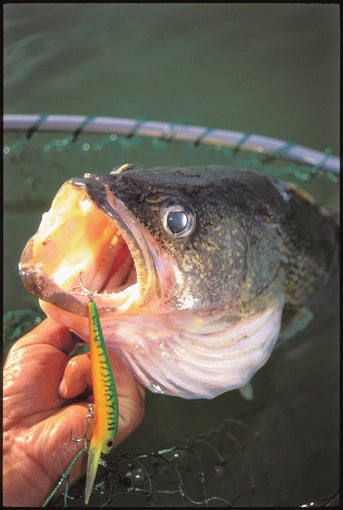 Dirty water proceeds in stages. It generally begins in part of the waterway (on the windward shoreline, for in-stance, or along muddy banks after a rain) and spreads across a lake or down a river. Water clears in the same way. Look for those places at wind or current breaks, behind long points on lakes or behind wing dams of other structures that project off riverbanks. These clearer-water areas might not be large, but anywhere the water transitions from muddy to less dirty is a good place to start fishing.

Generally, by heading upstream or into the wind you’ll find the first areas to clear. Anything that filters the water, such as submerged vegetation or zebra mussels, will clear up the water more quickly. Areas directly downstream of clear feeder creeks often provide fishable water. Concentrate first on the edges where the clearer water mixes with dirtier water, then progress into the clearer water.

Presenting a bait or lure to walleyes is more difficult when there’s low visibility. Adding rattles to jigs or using crankbaits with sound chambers in-creases the odds the fish will zero in on the lure. So will increasing its size: If you fish with spinner rigs or crawler harnesses, use larger spinners. Ham-mered metallic blades work well if it’s sunny; otherwise, use brightly colored blades. If you fish with jigs and bait trailers, a plastic curlytail grub body will add bulk. Bright colors, either fluor-escent or multihued, are an added attraction, as are glow-in-the-dark jigheads. Scent (either scent-impregnated baits or a spray-on product) is helpful.

Dirty water is often associated with spring floods and traditional approaches, such as vertical jigging in deep water. Consider trolling instead—the slower, the better. In rivers or reservoirs, that generally means crawling crosscurrent upstream to keep the bait working in the strike zone as long as possible. Work close to the bottom, either with a three-way rig with a heavy weight off a dropper, in-line weights or bottom bouncers. Work the rig back and forth over the structure you’re targeting, making sure the bait stays on the bottom. Forget about  trying to catch any suspended fish; they’re too much of a crapshoot in low-visibility conditions.

4. Be Ready To Strike

If there’s a positive to dirty water, it’s that walleyes are rarely as finicky about taking a bait or lure as they can be when it’s clear. If you feel so much as a tick on your line, set the hook. In dirty water, you don’t usually have to worry about short strikes. Once they find the bait, they generally grab the whole thing. Don’t give a walleye time enough to spit it out.

Muddy water in a river is often associated with heavier current due to spring runoff, so head for the bank. River walleyes are not trout or salmon; they’re not comfortable fighting current and will likely move to quieter water when the current increases. Go shallow. You’ll often find fish on the shallow flats of muddy rivers that photo—-sensitive walleyes would otherwise avoid during daylight hours. Fish slowly, covering an area thoroughly before giving up on it.

I once rescued an opening-day trip from failure by concentrating on the original shoreline of the flooded river. I dabbled jigs and minnows around the trees and brush along the bank, hauling walleyes out of water barely deep enough to cover their backs. The same approach works on lakes where reeds or other emergent vegetation might not hold fish in clear water.