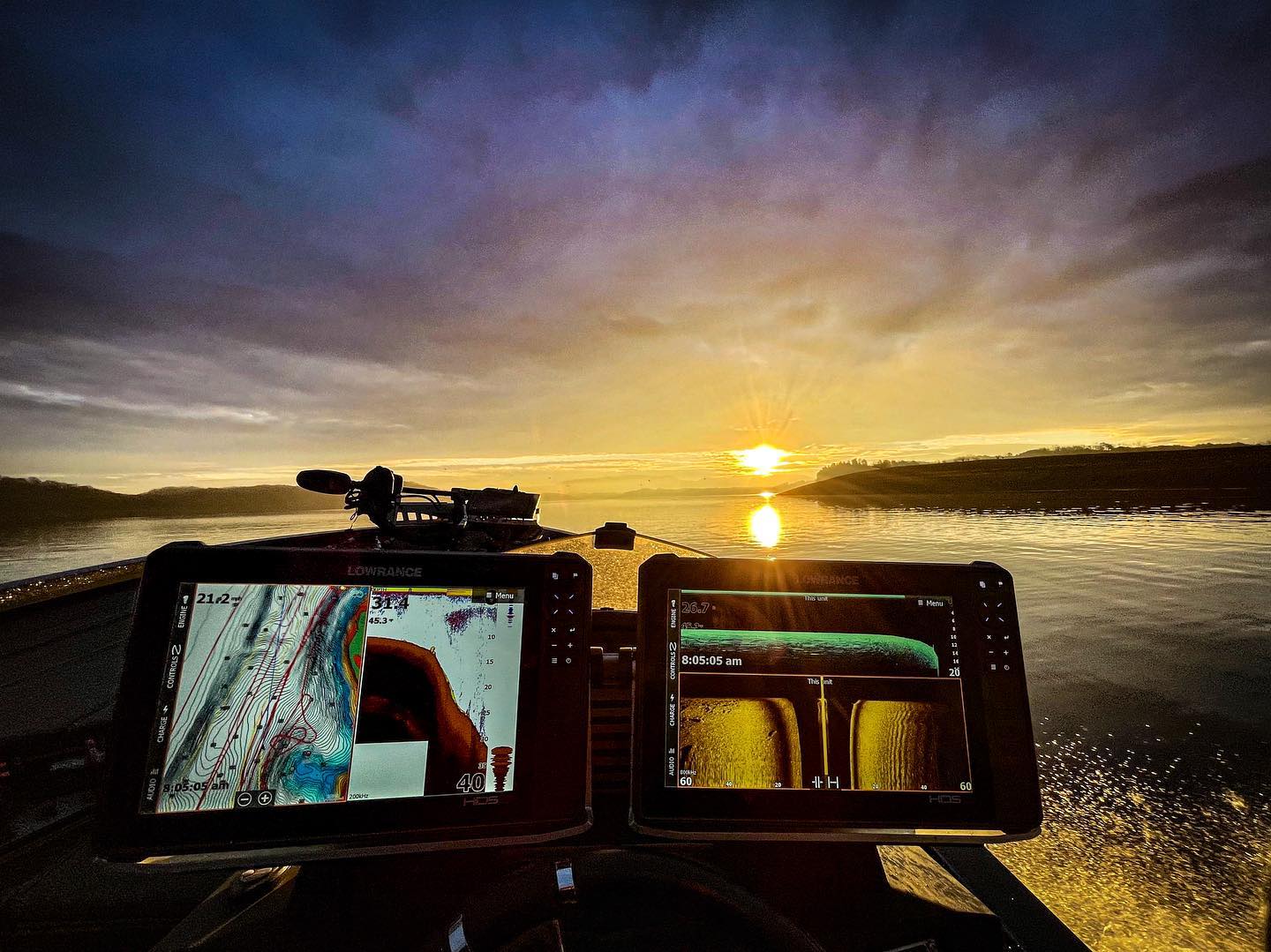 When I purchased my first bass boat in 1996, I had the best fish finder at the console and the bow—two 5-inch black and white screens that produced pixelated two-dimensional images in black and white, plus a flasher unit in the dash.

Today, such technology can still be useful and appropriate for some anglers, but it’s primitive to what’s available. Now there are living color screens as big as your television, complete with touch-screen technology. Depending on what you want or need to do, they have not only GPS with enhanced mapping and two-dimensional sonar, but also down-imaging, side-imaging and front-facing sonar capabilities.

Why Do You Need Electronics?

Electronics on a boat serve a variety of purposes, related to both fish location and safety. Sonar in its varied forms allows a boater to know how deep the water is and what lies beneath the surface. Is there a point or hump underneath you? Is the bottom hard or soft? Are there baitfish or gamefish in the vicinity? A simple depth finder can also prevent you from running aground.

Mapping technology in the form of GPS allows newcomers to a body of water to break things down more quickly. You see where it’s safe to run, and where there are obstructions or obstacles. Furthermore, if you locate or catch fish in a particular type of area—say a long-tapering point or a 5-foot deep flat—you can quickly identify similar spots and see if a pattern emerges. Some models even tell you the tidal phase for your precise location, further enhancing both safety and fish-finding capabilities.

Features to Look for in a Fishfinder

As noted above, most of the earliest sonar models simply provided two-dimensional readouts. “Flashers” sent a “ping” to the bottom which bounced back to the unit. The amount of time that it took for the signal to return indicated the depth, and the length of the light on the unit indicated bottom hardness. Fish or other items that got in between the surface and the bottom in the unit’s cone-shaped signal were represented as “blips” and it took practice to decipher what they were. Eventually, these signals were replaced by two-dimensional drawings, either on paper or in pixels, that showed a more distinct picture of what was under the boat, although not precisely in real time.

Next came mapping, first through LORAN technology and then through GPS. Through either an internal or external “puck” the electronics units receive a location signal and then draw a picture of the map on the screen in front of you.

Subsequently, other sonar technologies were added. Side-scanning sonar allows a boater to idle along and shoot a beam out up to 150 feet off either or both sides of the boat to locate schools of fish, cover and structure. Down-imaging sonar provides a different version of the traditional two-dimensional picture, allowing boaters to use them separately or in concert to gain a complete picture of what’s under the boat. And front-imaging sonar, usually mounted trolling motor, allows you to see fish within casting range and them present a lure or bait to them. It also allows you to gauge their reaction to your offering in real time.

While there are multiple brands in this space, through consolidation and marketing efforts three dominate usage by freshwater anglers. In recent years they’ve engaged in an arms race to develop and improve features at a rapid pace, often in conjunction with their sister brands of trolling motors. Here’s how they compare.

Garmin has long been a leader in the automotive and aviation space, but their full-tilt plunge into the marine world upped the ante for everyone, particularly with their release of Panoptix and LiveScope forward-facing technology.

“Obviously, LiveScope makes a huge difference for most of us,” said Missouri bass pro Chad Morgenthaler. “From panfish on up, it makes me a more efficient bass angler.” Ten- and twelve-inch screens have long represented the outer limits for most freshwater anglers, but Garmin also offers models in 16-, 17-, 22- and 24-inch sizes.

“One thing I really like about them is that the menus are really easy to navigate,” Morgenthaler said. “Once you’ve done it a couple of times, it just comes naturally. The other thing that makes this company special is that they’re constantly updating the software and the various transducers. The staff is large and educated, so in the case that you have a question there’s always someone who can set you on the right path.”

While the larger screens with massive computing power understandably cost thousands of dollars, there are also more budget-minded options to fit your particular needs.

Best Side Imaging: Humminbird Helix with 360

Humminbird added forward-facing sonar this year with their ICAST award-winning MegaLive technology, but they’ve distinguished themselves from the competition for several years through their 360 technology, which as the name suggests sweeps around the boat to produce a full picture of every obstacle and piece of cover within a predetermined range.

The Apex and Solix electronics are at the top of the lineup, but Texas offshore wizard Keith Combs says he “like() the Helix because it’s very user friendly. It does everything I need it to do and it’s very simple and user-friendly, while remaining crystal clear. “I have great down-imaging, side-imaging, 360 and now front-looking with Mega Live. That’s something that no other company can offer me.”

He said that the combination of 360 and Mega Live is critical. The former allows him to get a complete picture of what’s around him, and the latter allows him to really bear down on individual objects and fish. “I can see exactly what’s going on.”

Lowrance has been a leader in this space since founder Darrell Lowrance, often called “the father of modern marine electronics” transformed the sport of bass fishing from a bunch of bank beaters to a cadre of more educated anglers. Today the company carries on his legacy through products that are advanced and easy to use straight out of the box.

“Combined with my advanced mapping, I know my exact position and precisely where I want to cast. It’s a total system, everything goes hand-in-hand,” he explained. He runs four HDS 12 units on his Skeeter bass boat. Up front, one is typically split between mapping and two-dimensional sonar and the other is dedicated to Active Target. On the console, one is usually used for mapping, while the other is split between structure scanning and two-dimensional sonar. That gives him a complete picture of his environment and “helps me to identify catchable fish.”

How Should Electronics Be Mounted?

If two units stretches your budget too far, it’s possible to put a single graph on the console on a swivel, and then rotate it depending on where in the boat you stand or sit.

Among top guides and professional anglers, the recent trend has been to run a total of four or five units, with varying functions on each screen, but this effort can quickly get up into the tens of thousands of dollars.

Other Considerations When Finding the Best Fish Finder

No matter which brand, model or size of sonar you purchase, you’ll need to make sure that your best fish finder is rigged properly to get the most out of it. That starts with having sufficient battery power. Modern units will drain subpar batteries in a heartbeat, potentially stranding you on the water and rendering your expensive “computers” into costly paperweights.

You’ll also need to use the appropriate transducer, rigged straight and at the proper depth, to get true pictures at all speeds. Depending on where it’s mounted, you may want to buy some sort of shield or protector to prevent it from getting knocked off by the next stump you hit.

Heavy gauge wiring will also limit the degradation of information and prevent interference. In fact, some anglers have gone to dedicated high-tech wiring systems to ensure that they have a crisp and uninterrupted picture at all times.

Additionally, while many high-end units come with mapping software pre-loaded, there are a variety of aftermarket chips that can enhance the experience. Some are even built by local guides to include unmarked boat lanes and hazards.

Remember, you don’t need to have the biggest screen or the most powerful models to use electronics correctly or efficiently. Get what you can afford and what suits your needs, but remember—no one every complained about having too much computing power or a screen that’s too big. When in doubt, get the best that you can.