If you’re looking for an angling adventure away from the crowds, take your pick of these wilderness jewels. 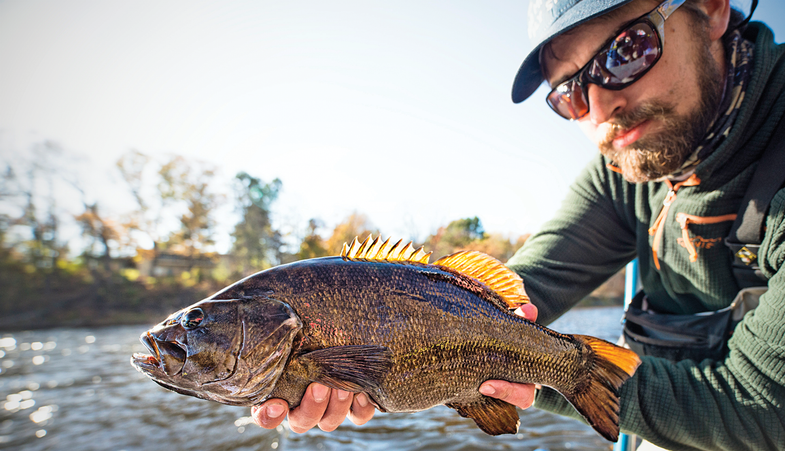 Did you celebrate Back to the Future day? On October 21, 2015, popular culturists ruminated on the varied technological innovations predicted in the Michael J. Fox films. Personal drones, wearable technology, and video phones are but a few of the movies’ inventions that have made their way into our lives. Alas, time travel remains unrealized. But is it at least somewhat doable?

Time machines may not exist (yet), but there are still destinations where we can escape modern technology and take a step back in time, places that have remained virtually unchanged for centuries.

That’s exactly what these four backcountry angling adventures are about. Imagine virgin forests, wild streams, remote lakes, and rugged landscapes that will not only reward you with breathtaking views, but also produce outstanding fishing opportunities.

Henry David Thoreau once escaped to the Allagash wilderness of Maine, and his account of the excursion, “The Allagash and East Branch,” was later published as the third chapter of The Maine Woods. While camping on Chamberlain Lake, he wrote, “In the middle of the night, as indeed each time that we lay on the shore of a lake, we heard the voice of the loon, loud and distinct, from far over the lake. When camping in such a wilderness as this, you are prepared to hear sounds from some of its inhabitants which will give voice to its wildness.”

In 1966, the state designated the region Thoreau wrote about as a wilderness waterway, and today the landscape remains virtually unchanged since the author roamed it in the mid-1800s. Public access is still limited to logging roads, and camping facilities are primitive.

The waterway is made up of a ribbon of ponds, lakes, streams, and rivers stretching 92 miles through the heart of Maine’s North Woods. From May to October, campers and paddlers enjoy this wilderness. But the best time for anglers to trek to the Allagash is from ice-out in early May through mid-June.

The best fishing can be found in the headwater lakes, including Chamberlain, Eagle, Churchill, and the Allagash. However, Allagash Lake is the gem of the waterway because it is difficult to access. The lake has a boat motor restriction, and it’s a mile from any logging road.

“Eighteen- to 20-inch brook trout are commonly caught at Allagash Lake in the spring,” says Matt LaRoche, superintendent of the Allagash Wilderness Waterway.

Reaching the lake requires a 2- to 3-mile canoe trip from Johnson Pond via the Allagash Stream Inlet. Once you arrive, you can stay on the lake at one of the many backcountry campsites. You can exit the same way you entered, or for longer adventures, continue down the Allagash Stream to Chamberlain Lake.

The Allagash Stream trip to Chamberlain Lake is about 7 miles, and you will need to portage around the Little Allagash Falls and possibly a series of nearby smaller falls. All of the falls are worth fishing, as is Chamberlain Lake, where you can camp and fish. The take-out point is about 16 to 18 miles farther down the lake at the Chamberlain Bridge Ranger Station.

Trolling is a popular method for taking big brookies on the headwater lakes. Streamer flies, such as Grey Ghosts, are recommended. Copper Weeping Willows with red dots or Rapalas are also effective when trolled. In May, you might need to start out trolling only 1 to 2 feet deep. Ask around when you arrive.

Located along the southern shores of Lake Superior in the Upper Peninsula of Michigan, the Porcupine Mountains State Park was formed in 1945. In 1972, the 60,000-acre tract gained its designation as wilderness, which better describes this region of towering pine and hemlock stands carved by wild streams and secluded lakes. Today, it is still the only state-designated wilderness area, and it is also home to great backcountry trout fisheries.

While several streams within the Porcupine Mountain region harbor dazzling brookies, the jewel of the park for these native colorful explosions is the Little Carp River. This tumbling freestone brook trout stream is mostly shaded by dense woods. Crouching behind a streamside bush with a fly rod on the Little Carp in the middle of an afternoon hatch feels like Christmas morning when you were six. And the best thing is, you can stay for several days at any one of several backcountry campsites along the 11-mile Little Carp River Trail.

You can easily access the trail from the south via the 2.6-mile Pinkerton Trail. This trail will put you at the mouth of the Little Carp River.

The best steelhead fishing is located at the mouth. Brook trout can be found farther upstream near Shining Cloud Falls. Above the falls, the trail and river go their separate ways and cross paths only from time to time.

“Bring No. 2 and No. 3 Mepps Spinners and Panther Martins for steelhead,” says park ranger Emily Pleiness. “Orange and Gold Little Cleos are another favorite. Smaller versions of these baits are also popular with brook trout anglers.”

With more than 87,000 acres of open space, Coe Park is the largest state park in Northern California. Originally a working cattle ranch, this sprawling wilderness is now a public getaway featuring the lofty ridges and steep canyons common to the Diablo Range.

While most people come to Coe Park to hike, there are several old watering holes on the property that harbor bass. With an average weight of about 2 pounds, these largemouths won’t break any state records, but the numbers are excellent, as would be expected from hard-to-reach waters. However, the backcountry is not for the fainthearted.

Reaching these ponds and lakes requires considerable time and energy. In fact, three of the top bass waters—Mustang and Kingbird Ponds and Jackrabbit Lake—may take two days of hiking and camping to reach.

Coit and Mississippi Lakes are slightly easier to get to. However, both still require 20-plus-mile hikes with 5,000-plus-foot climbs from the park headquarters. Mississippi is loaded with largemouths, while Coit harbors bass along with bluegills, crappies, and catfish. Kelly Lake is also worth checking out for bass and other species.

Spring is an excellent time to fish and hike Coe Park. Both the weather and the fish are usually cooperative. It’s not a bad idea to invest in a quality pack rod if you plan on doing this trip. In terms of terminal tackle, soft-plastics, such as Senkos, are excellent. Spinnerbaits, Rat-L-Traps, and other traditional bass baits are also effective. Fly anglers can also do well with a variety of topwater choices. The key is not to pack too much. Take a few different baits that you have confidence in.

You can camp at designated backcountry sites or within designated zones. A map is absolutely necessary for anyone heading into the backcountry. You can order one online or through the mail for a small fee. Packing a GPS is also a good idea.

“Besides a map and a GPS, consider bringing along a float tube if you have room in your pack,” says park maintenance chief Randy Neufeld. “Often ponds and lakes have limited shore access due to the tule reeds that grow along the edges.”

The Buffalo was established as America’s first national river in 1972, and today it is still one of the few remaining undammed rivers in the Lower 48. The 135-mile section of the free-flowing waterway located within the park is flanked by multi-­colored sandstone and limestone bluffs of the Ozark wilderness. Backcountry anglers can expect generally clear water, with plenty of running rapids mixed in with quiet pools.

As with most popular national rivers, the trick is locating quiet stretches of water during the spring and early summer months.

Austin Albers, general manager of the Buffalo Outdoor Center, says, “Anglers should find plenty of action and relief from the crowds along the stretch from Carver to Woolum.”

Two designated primitive campsites also make this 15-mile section ideal for an overnight adventure. These sites are available on a first come, first served basis. Adventurers are also allowed to make primitive camp along the river sandbars or at any other suitable site, as long as they are at least a half mile from any other park development, including campgrounds.

Be sure to take along plenty of creature baits, such as plastic crawdads. Smaller spinner baits are another local favorite with bronzeback anglers. Flyfishermen should pack bead-head Woolly Buggers and crawfish imitations.

Tap local outfitters for a rental if you don’t have a canoe. Those same outfitters will also shuttle you to and from your drop-off points.