If you tell any native Mariner you are headed "up country," they will immediately know where you are going: Aroostok County, the northernmost and one of the largest counties in the Pine Tree State. Generations of sportsmen have made the trek toward the Canadian border in pursuit of fish and game. 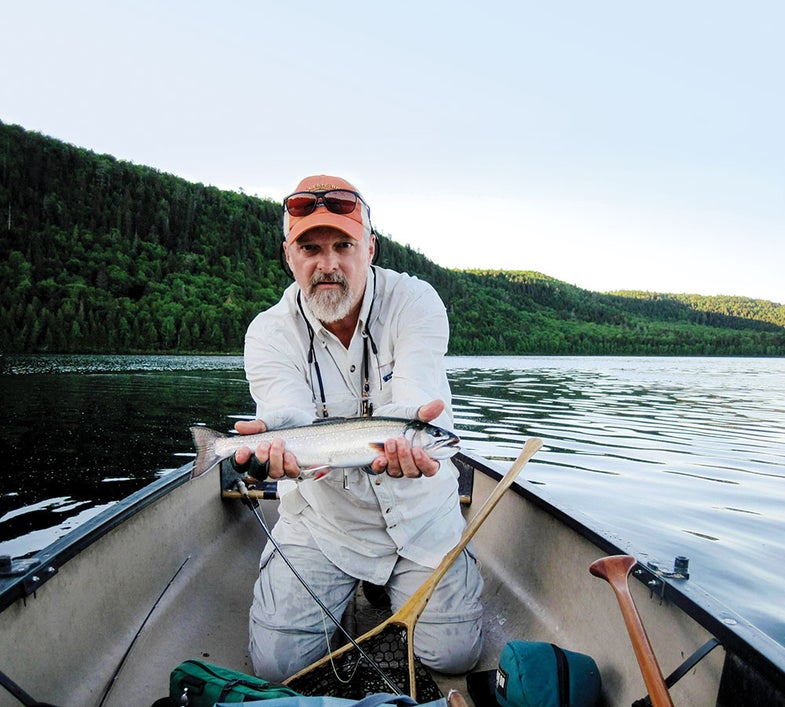 The North Maine Woods— 3.5 million acres of land owned by paper companies, the state, and local townships—makes up most of Aroostook County, which is as remote as any in the Lower 48. This sprawling county contains the 21,871-acre Deboullie Public Reserved Land. Millions of years ago, glaciers carved this area, crumbling the softer shale and leaving the harder metamorphic rock, which became the mountains that now frame 17 lakes.

The forest is a mix of old-growth spruce and mature hardwoods. The ponds range from a tiny 8-acre puddle up to a 341-acre lake accessible via a surprisingly well-maintained 12-mile network of trails. Unique to Deboullie is its fishery. A small population of native Arctic char lives here, somehow left behind by retreating glaciers. Most of this species exists above the Arctic Circle, but there are a few isolated populations south of the 60th parallel—12, to be precise.

One-third of these exist in Deboullie Township. Like many fish, Arctic char are known by a number of common names in different regions, with “trout,” “brook trout,” and “char” often used interchangeably to describe members of the Salvelinus genus. Here, they are known as blueback trout. Though there has been disagreement among ichthyologists concerning the taxonomy of these fish, the late Robert Behnke (aka Dr. Trout) has written that these are indeed direct descendants of Arctic char—a species of fish that requires a very narrow set of habitat requirements, including clean, cold waters.

In the winter of 2015, a college friend and fishing buddy of mine, Matt LaPointe, first told me about this novel fishery. I was instantly intrigued. I spent the next few months turning wrenches, trying to ensure that my truck wouldn’t leave us stranded in the middle of nowhere on our trek north into the wilderness. We pondered maps for hours, consulted with Jen Brophy, owner and operator of Red River Camps (redrivercamps.com), and hit the vise to tie what we hoped would be char slayers.

“The best time to try for char is when the water is cold: late May through mid-June, and then again at the end of September,” says Brophy. “The deeper ponds [Gardner, Deboullie, and Black] are the most productive. Although the state record [5.24 pounds] was caught in Pushineer Pond, its relatively shallow depth makes it less likely to produce as many char as its deeper neighbors. Our guests who do have luck landing char tend to do so in Gardner and Black—both are cold and deep, and both require some effort to get to [Gardner by either hiking or crossing Deboullie and portaging, and Black by hiking]. Wet flies, sinking line, and trolling tactics are most likely to produce results, although no one yet has found a truly reliable combination. Such is the nature of targeting rare fish.”

Frank Frost, a fisheries biologist who has been studying these fish for some 15 years with the Maine Department of Inland Fisheries and Wildlife, agrees. He conducts surveys every four to six years or so to inventory fish populations. These indicate that the first half of June and September are prime, with the beginning of June being your best shot for taking bluebacks on the surface—mayfly and caddis hatches are the stimulus needed to get them to the top.

In the heat of the summer, they may go down to depths of 60 to 80 feet seeking their ideal water temperature of 50 to 55 degrees, though in certain ponds they can stay in the littoral zone for extended periods. One published study from 2001 lists a catch rate of approximately one char every 28 hours, though Frost is quick to point out that study was of all anglers in the region, not just those targeting char. He estimates success for those specifically targeting char to be much higher. He listed Deboullie Pond as his first choice, with Black Pond a close second. It was clear, however, that ours would be no slam-dunk fishing trip.

Crystal-clear lakes in a huge expanse of wilderness can make any angler drool. We faced long odds but met them with great anticipation. What we quickly discovered was that access to the ponds was better than we could have imagined. Boat ramps are not paved, but they are among the better gravel slopes I have ever seen. As evidenced by the handful of motorized runabouts we saw, they were sufficient for boats up to 16 feet or so.

We used inflatable rafts, as these ponds are tailor-made for float tubes. We took a couple of OSG Commanders with us, figuring we could use their oars to cover ground quickly, but we could still use fins to dissect small pieces of cover. Trolling from canoes or other small craft on trout and salmon waters in the Northeast is as traditional as maple syrup. For almost as long as there have been canoes, people have been dragging flies behind them.

The erratic motion of the paddle strokes gives an alluring action to the bits of fur and feather suspended in the water column. Many an old-timer has spooled a fly reel with a length of lead core to get deeper in pursuit of fish once they have left their shallow ice-out habitat. Completing the canoeist’s outfit is the traditional set of Down-East Rod Holders clamped securely to the gunnels. Our time in Deboullie was marked by exceptionally strong winds, which created whitecaps on even the smaller ponds. It was impossible to make any headway, even with the low profile of our inflatables. Ultimately we decided to portage to the upwind side of the ponds and troll as slowly as we could rowing against the wind.

The RIO Deep 7 lines we were using had a sink rate of 7 or 8 inches per second, so they got our flies down fast, and the relatively thin diameter helped keep them there. For flies, we used some traditional Maine favorites: Grey Ghosts, Maple Syrup, Warden’s Worry, and Blacknose Dace. We managed to catch a number of brook trout on the troll, though nothing terribly outsize. When it was too windy to row against the wind, we hit a number of small feeder streams and pounded one 6-inch parr after another on Humpies and Elk Hair Caddis. On our last day, the winds broke and we were greeted by the warmth of the Indian summer.

The brookies cooperated by rising greedily to size 20 midges. Fishing was hot and heavy, hinting at how great it could be. Though we failed in our quest to catch a blueback, both Matt and I are already scheming for a way to sneak back up there as soon as possible.