The first pickup with rear wheels that turn together with the front wheels. 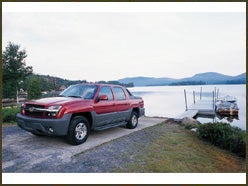 “Revolutionary” is a word that is loosely used inthe automotive industry. Yet the GMC Sierra Denali pickup not only stakes that claim; it makes it stick. Sportsmen who tow boats and campers should take note:

The Sierra Denali is the first pickup to offer rear-wheel steering and all-wheel-drive (features introduced on the Sierra C3 by GMC last year).

Close your eyes and crawl under the truck and you’ll have a hard time telling the front from the rear. This is because the Sierra Denali’s rear axle looks like a front axle and wheel assembly. The rear end is controlled by a computer that takes the vehicle’s speed and wheel position into account before determining the appropriate rear-wheel angle. Then it tells an electric motor how much to turn the rack-and-pinion gear. (Of course, all that happens in less than a second.)

Three buttons on the dash switch the Quadrasteer system into its three modes. There’s a two-wheel steer mode (2WS) that allows the Sierra Denali to operate like a traditional truck. There’s a four-wheel steer mode (4WS) in which the rear wheels turn opposite to the front wheels (called out-of-phase steering) until the vehicle reaches about 45 mph; at that point the rear wheels turn in the same direction as the front wheels (called in-phase steering). And there’s a four-wheel steer tow mode (4WS Tow), which operates the same way as the 4WS mode except that the angle of the rear wheels is set more severely in order to better control the trailer or boat hitched behind.

So what does all of this mean to sportsmen? Plenty, if you pull campers or boats. Because the 4WS and 4WS Tow modes turn the rear wheels in an opposite direction to the front wheels at low speeds, the turning diameter of the Sierra Denali is on par with most sedans (a mere .3 feet wider than a Saturn coupe’s).

Another attribute of the Quadrasteer system is that it practically eliminates the “lurch” that occurs when you make a lane change. Most trucks have a tough time shifting lanes while towing trailers because even though the front wheels want to shift lanes, the rear wheels and trailer wheels are still pointed straight. With Quadrasteer, however, the rear wheels turn at the same time and in the same direction as the front wheels (when the vehicle is doing more than 45 mph), allowing the truck to simply slide into the fast lane.

I tested this maneuver on a closed driving course and on the open highway with a 30-foot camper in tow at speeds ranging from 35 to 65 mph, and found that the steering was so smooth I kept crossing two lanes instead of one (on a six-lane highway). It took me a few minutes to get the hang of it. Quadrasteer and all-wheel-drive are standard features on the Sierra Denali. Engine and transmission availability will be limited to a 6.0L Vortec 6000 V-8 and a four-speed automatic. The Sierra Denali delivers a maximum trailering capacity of 10,000 pounds.

The Quadrasteer system will likely appear on future GMC models. But for now, if you tow trailers or boats, the 2002 GMC Sierra Denali is worth considering.